Edouard Malingue Gallery is pleased to announce its participation in the upcoming Beijing Contemporary, featuring works by Eric Baudart, Cui Xinming, Chou Yu-Cheng, Ko Sin Tung, Wang Wei, Yuan Yuan and Zheng Zhou. Founded in Hong Kong in 2010, Edouard Malingue Gallery is committed to building a critical dialogue between Asian and international contemporary artists, both emerging and established, who combine aesthetic concern with conceptual enquiry across different disciplines from video, installation to painting and sound. In 2016 the gallery opened a second space in West Bund, Shanghai creating a wider platform for its roster of artists. In addition to presenting dynamic solo exhibitions, the gallery pushes boundaries by promoting artistic discourse and public art projects through collaborations with curators worldwide.

Eric Baudart (b.1972) is a French artist who appropriates, transforms and alters readymades as well as decontextualises quotidian objects that people overlook or take for granted based on their functionality. When isolated, disassembled, accumulated or reorganised the concept of the object moderately dissolves, generating a new metonymy and aesthetics based on the exhibition context. When it comes to material, the artist thinks that used objects are best as they avoid the traditional interpretation of mediums in art and better represent spiritual aspects that go beyond. In ‘Papier Millimetre’ (2017), Baudart used a craft knife to trace each line (one millimetre apart) on a huge piece of architectural paper until a special texture is achieved by this monotonous mechanical repetition.

Cui Xinming’s (b.1986) paintings are replete with surrealistic elements and imbued with a strong religious atmosphere. After high school, the artist went to Chongqing for further study and has lived there ever since, but Qing Zhou, his hometown in Shandong Province, along with all his growing experiences, often appear in his works in various forms of imagery. Cui’s strong desire to express originated from his feelings about the huge differences and conflicts between Chinese and Western cultures and his vision of the lively scene that’s developed between modernisation and the deep-rooted isolated culture in rural areas. Cui once described his work style reflecting that “my greatest interest in my paintings is to depict a stage where I can explore my situation and the confusion that arises from it”.

Chou Yu-Cheng（b.1976） is adept at the dual manipulation of aesthetics and social critique. Chou focuses on the workflows pervading visual production, paying attention to the ways whereby alternative modes of operation and reflection are generated within a pre-existing system of operation. He creates corresponding alternative benefits in “atypical cooperation” while highlighting the problems with a given reality. His modes of creation range widely over all kinds of mediums but mainly centre around “mix and match” – through his role as a “go-between” and through individuals, enterprises and institutional structures, which he views as “subjects”. By manipulating “workflow” – such as diversions, transferrals or disparities in time or place – the projected outcomes are generated, forming a reciprocal dialectic between origins and results.

Ko Sin Tung (b.1987) is a Hong Kong artist who works across different mediums including painting, video, digital printing, etc., through which she examines the state of her personal life and its connection with the city. Ko investigates, through different images and objects, the idiosyncratic functions and derived psychological effects at both household and city level, with the goal of understanding people’s expectations for their life and future and the inevitable emotional gaps that follow. In her ‘As White as You Can’ series, Ko collects partial exterior window views from unfamiliar residences and uses painting to imitate computer rendering effects. She removes the decorative elements of the original windows and paints all the railings of a residential building in white revealing light — the most primitive scenery in the picture. Through this “stripping” process the artist attempts to reach the beautiful, commemorative side of objects. After removing the visual interventions, Ko Sin Tung discovered the impact of “light” on domestic space and its representation in material forms as well as metaphorical meanings.

A graduate from the Fresco Painting Department of the Central Academy of Fine Arts, Wang Wei (b.1972) is a multidisciplinary installation artist who focuses on how the guiding nature of physical space makes its mark on one’s real life. Wang developed a powerful interventional practice by using peculiar and unexpected supplements to transform the structure of existing buildings, aimed at disrupting people’s general perception of space and initiating a conversation on architecture, labour and ways of viewing. The artist also concentrates on observing reality and constantly discovers the existing gaps and edges in common sense. He identifies the least noticeable parts of our daily scenes and acts like an ordinary person whose most simple and intuitive judgment gradually constitutes the complex and ”centre-less” facade of our living world. This forms Wang Wei’s main concern and marks the characteristics of our times.

A graduate from the Oil Painting Department of the China Academy of Fine Art, Yuan Yuan (b.1973) excels at exploring the traces of humanity and the passage of time in architectural subjects through his depiction of indoor and outdoor spaces on canvas. His brushstrokes often depict a silent, unmanned space with a permeating sense of desolation and yet, through all the minute details, the viewer is able to perceive the slight touches of the former residents. From a distance, Yuan’s paintings almost ressemble photographs. Nevertheless, his work never represents reality – rather they reflect a quest of passing time characterised by luxurious yet deserted spaces and the state between wealth and abandonment. The two works brought to the fair were specially created for ‘Alternative Realities’, Yuan Yuan’s solo exhibition this June at Palazzo Terzi in Bergamo, Italy.

Born in Wenzhou, Zhejiang Province, Zheng Zhou (b.1969) studied Printmaking at Zhejiang Academy of Fine Arts (now China Academy of Art). Zheng uses painting to record the everlasting flow of thoughts, to examine his own reception and feedback on outside information, and to analyse his hidden fantasies and desires — painting is the outlet for all the secret mental activities. In terms of style, Zheng Zhou’s work is close to Expressionism that promotes the impression of spontaneity and excludes perspective, dominated by bold colours and frantic lines and unlimited by the logic of any time or space, transcending the boundary of subjectivity and objectivity. To some extent, we can compare his work to the continuous, fickle and jumping expressions of inspiration, intuition or subconsciousness present in one’s stream of consciousness. To Zheng Zhou, painting is just like the lingering thoughts and daydreams in one’s mind. Since the flow of consciousness never stops, all he needs to do is to transform it quickly onto canvas. 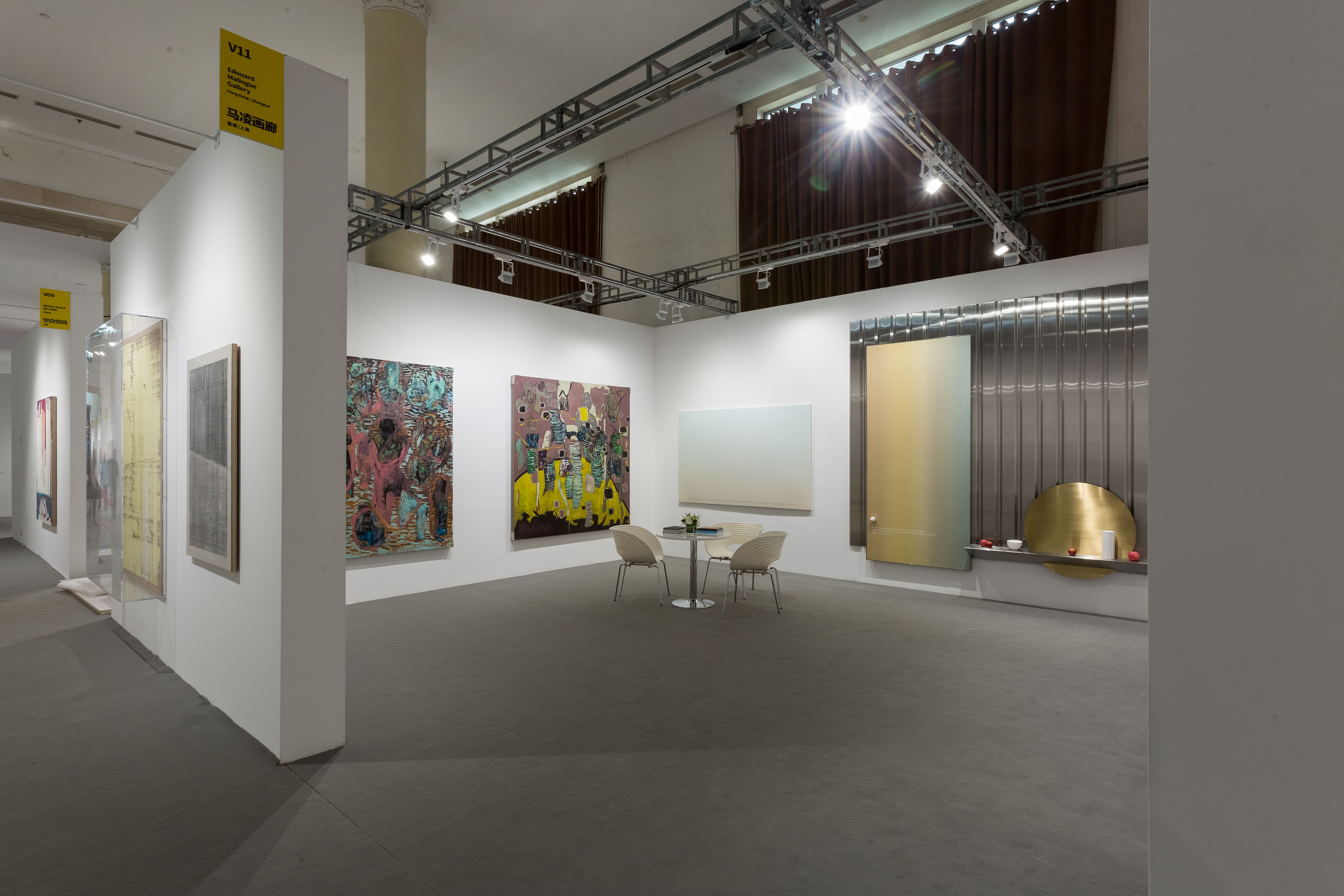