Edouard Malingue Gallery is pleased to present Wang Zhibo’s (b. 1981, China) solo presentation, “Actor: Talking, Imitating, Teasing and Singing” at Gallery Weekend Beijing, showing eight of her recent paintings. A graduate from the China Academy of Art Oil Painting Department, Wang currently lives between Hangzhou and Berlin. Her paintings survey the absurd spectrum of what is real – geographically, historically, ethnographically, architecturally, and confound our notions of time and space. Wang not only challenges the possibilities of these concepts within the two-dimensional space but also with the viewer’s perception and interaction with the work.

The title of the exhibition “Actor” is inspired by the performers on the Xiangsheng stage, and the English title is a direct translation of the basic skills of Xiangsheng performance: Talking, Imitating, Teasing and Singing (說學逗唱). These new works reflect Wang Zhibo’s recent experiments and explorations in painting. Both human and non-human forms are charged with the same emotional intensity in Wang’s paintings, as the political ecologist Jane Bennett mentioned in her 2009 book, Vibrant Matter, there is a “vital materiality” that runs through and across bodies and things in the world, echoing the “personification of objects” with the “objectification of human”.

The subjects of Wang Zhibo’s early paintings were often empty public spaces such as parks and squares, avoiding the narrativity brought about by the appearance of people. She was exploring the relationship between human behaviours and spatial attributes, and the influence of historical and cultural changes on the architectural landscape from the perspective of psychogeography. Then, Wang began to paint still life, people, or the intercourse and deformation between people and objects. “He no longer looks human” was the title of Wang’s solo exhibition at Edouard Malingue Gallery, Shanghai in 2018. In Wang’s work, the human body—an arm, a leg, a posture, a gesture—is a simple and pure subject not worn out by thinking; to us, it is familiar and yet foreign, the base of life both loved and feared. Recently, Wang has moved from Hangzhou to Berlin. There is a transition between Eastern and Western cultural backgrounds, as well as shadows casted on her mind by the globally spreading survival crisis in 2020. Wang’s turbulent experience in the midst of changes thus is somewhat reflected in her recent works. She is haunted by nostalgia. But there’s no way back. So she ties together her experiences of various times and spaces. The repeated and protracted social isolation in Europe made her rethink the relationship between people, between people and society, and resettle her nostalgia, as well as gain a new perception of her own identity. The inspiration of ‘Thump, Thump, Thump II’ was from Wang’s experience when she was dining at a Chinese restaurant in Berlin one day. A few kids filed in. Their blonde hair shined brightly in the dark and murky restaurant, and had attracted Wang’s attention, which may be a particular visual concern for Asians. She tried to grasp the feeling of this moment when her self-awareness of being an ethnic minority was triggered by the blonde hair. This realization is rather new to Wang for she had just moved to Europe recently.

Wang explores the performative aspects of human movement, a sense of artificiality after objectification: the floating body, the body falling by gravity, and the rolling body. Both ‘S Shaped’ and ‘A Riddle of Feminist’ depict human bodies lying down. This is because, according to the artist, standing straight does not reflect the physical state of human beings as much as lying down. It is easier for people to feel the weight of each body parts when they are lying down, to understand the limitations of human strength and mobility, and to form an objective understanding of their bodies. Wang used to consider human movements and human body as two separate categories when depicting human movements in her oeuvre. She deliberately blurs the face of the character and focuses on the information conveyed by the body. In her opinion, the face and the body often send out different codes, like two channels of information that interfere with each other. The body often conveys more hidden and imperceptible facts. In the background of Wang’s works, there are often hidden dense ripples, grids, central vortexes and other patterns generated in the digital age. She feels that this new visual effect derived from network technology provides a new dimension between reality and fantasy, a virtual experience that modern people are obsessed with. Wang experiments with blending this experience into the process of shaping the subjects she paints, hoping to convey a more complex narrative. 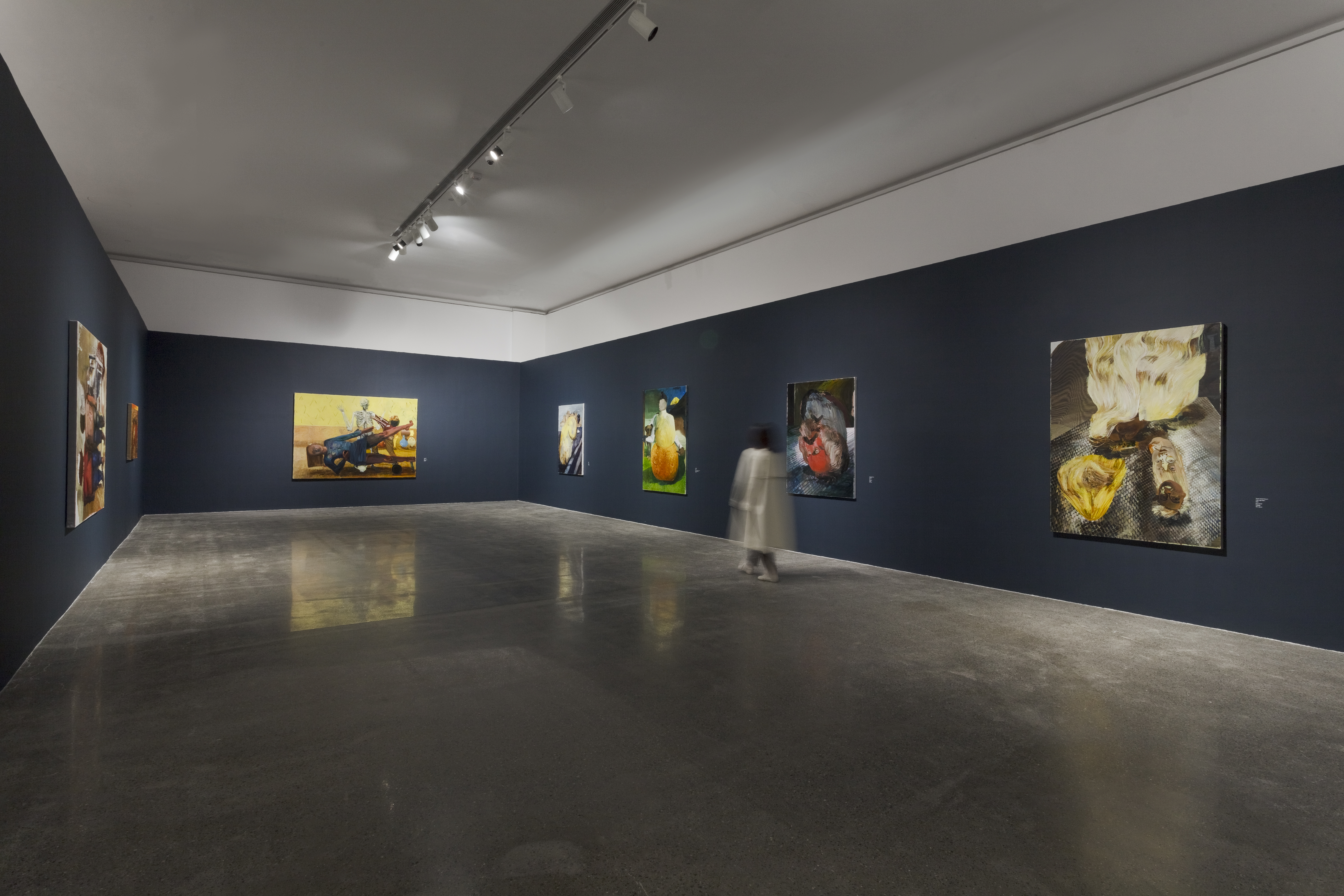