Cho Yong-Ik (b. 1934) has been highly lauded as one of South Korea’s most important painters. The Scratch Series from the 70s shows his rhythmic gesturing across the canvas, as he pressed off the top layer of paint with his bare thumb to reveal the alter undertone. Associating his practise from this period with ancient Korean pottery and artefacts from various dynasties, the artist also acknowledges the influence of Western abstraction through Japanese art. Revealed in the two major pieces of work ‘74-114′ (1974) and ‘76-728′ (1976), is the artist’s emphasis on process and action, and the meditative, ‘breathing’ moment of art.

Chou Yu-Cheng (b. 1976) works across a wide range of mediums from installation to painting, investigating the interrelation between society and aesthetics through a minimalist yet thoughtfully choreographed skill set of knowledge and aesthetics that allows him to reveal the peculiarities of art, object, and space. Chou’s recent ‘Moody’ paintings are gradient and atmospheric compositions; both the intricately layered, juxtaposed gradation and the flattening gesture nurture a ‘mood’ that is digital and weightless in appearance, but is in fact meticulously articulated and rendered. The artist’s identification of pigments as a pollutant and the painting process as a continued contamination foresees a critical association between the material aspect of painting, and the global situation today.

A plethora of historical references dramatised by musical scores and allegorical lighting make up the pillars of Ho Tzu Nyen’s (b. 1976) complex practice. At the heart of Ho’s films and installations is an observation of history; more specifically, a weaving of fact and myth to unravel and reveal what one is told versus what one believes to know, interprets and remembers. Ho’s work titters on the edge of fact and artifice, tending in scope from research-driven documentative exposure to the fantastical. ‘R for Resonance’ (2019) is a story of the musical instrument gong in Southeast Asia, told not through words, but as a journey in virtual reality, in which one experiences a sequence of “virtual objects”, by which narratives and speculations permeate.

Brook Hsu’s (b. 1987) art focuses on examining pre-Christian myths, histories, modern literature, films and personal histories. At once psychedelic and tranquil, it reveals ways in which existing narratives can induce fear, anxiety, joy and sadness in the contemporary time. The large, ink on canvas ‘Faye’ (2021) belongs to a new series of portraits depicting characters in movies: This one is of the character played by Faye Wong in Chunking Express. Hsu is interested, by embarking on portraiture, to paint the human form, and the actors in character provide an open form for her to work with. Closely observing them in movies, Hsu takes screenshots of the moments which express this openness, and then makes carefully rendered drawings from these screenshots, before producing large-scale portraits.

For more than two decades, Liu Xiaohui (b. 1975) creates paintings that commemorate quotidian movements and tell captivating stories. From a series of works depicting bleak yet mesmerising western China scenes in places like Lanzhou and Dunhuang, to repeated, passionate studies of the artist’s mother and wife in domestic setups — demonstrate the artist’s deep interest in both the adventurous and the mundane. In ‘Untitled – The Movement of Wiping’ (2017-2020), the artist depicts a woman wiping glass. Visibly discernible are the varied speeds and directions of the labour, and the beauty of this impromptu choreography. This artwork in particular is an occasion on which Liu Xiaohui directly points out the temporal aspect and the mise en abyme element that is at work in his oeuvre: as she goes up and down, the woman becomes the bodily metaphor for the act of painting.

A seminal figure in the Hong Kong art scene, Ellen Pau’s (b. 1961) body of work has been an exploration of possibilities in visual art languages by always sticking closely to the current technological developments at the time. A running theme throughout Pau’s thirty years of practice is her concern with Hong Kong’s political climate, social livelihood and the changes of urban lives. ‘Diversion’ (1990) is exemplary of Ellen Pau’s earlier works. The Victoria Harbour swimming contests of the 1960s hosted by the Hong Kong Government are re-staged as an absurd metaphor for transgression. By combining footage from various sources, uncannily overlaying images and recapturing the reflected images from a television screen, the video is a sublime reflection of a collective memory then and now.

Wong Ping (1984) uses a visual language that sits on the border of shocking and amusing, and discusses his observations of society. Flashing, pop-like imagery; visual and auditory narrations that explicitly touch upon sex, politics and social relations; vibrant installations that extend into three dimensions the artist’s fantastical animation world – Wong’s practice combines the crass and the colourful to mount a discourse around repressed sexuality, personal sentiments and political limitations. In the music video ‘Under the Lion Crotch’ (2011), little people are skipping rope on a beautiful island when they are suddenly confronted by an alien that looks like a lion. Accompanied by the ensuing graphic but nevertheless child-like violence and critical lyrics, the work engages with Hong Kong’s rising social inequality issue and plays freely with classic icons of the city.

One of the most acclaimed artists of her generation, Yu Ji (b. 1985) creates sculptures, installations, videos and performances, and frequently transforms exhibition environments into its other: studios, gardens, abandoned sites, and islands. ‘Forager – lunch’ (2020) is an uncanny assembly of figures and things: on top of and beneath the hand-made, irregular and slanted table is a collection of plaster, corals, cement, sand, wax, lead, wood, water, juice and dry fruits. Yu Ji’s practise that often pertains directly to the idea and reality of wilderness is here doubly domesticated: not only are some of the artist’s favourite motifs miniatured, the theatricalised scene also confuses industrial materials with seaside treasures and juicy, tropical gems, incorporating the great outdoors into ‘home’, and works into ‘breaks’ as food is being prepared and carelessly dropped on the floor.

Yuan Yuan (b. 1973) focuses on tackling classic and contemporary architectural subjects, executed with impeccable technique from a remarkably distinct perspective. ‘The voice behind the curtain’ (2020) belongs to a recent series that departs from a set of photographs the artist took in Hong Kong years ago. The window scene is plainly ambient and porous, as air and light flows freely on the canvas; yet the artist’s meticulous dotting and lining — reminding one of a trypophobic imagery — also manages to render it cramped and claustrophobic. Eerily tranquil and enclosed, the painting toys with the old metaphor of a painting as a window onto the world, and actively hints at what lies beyond. 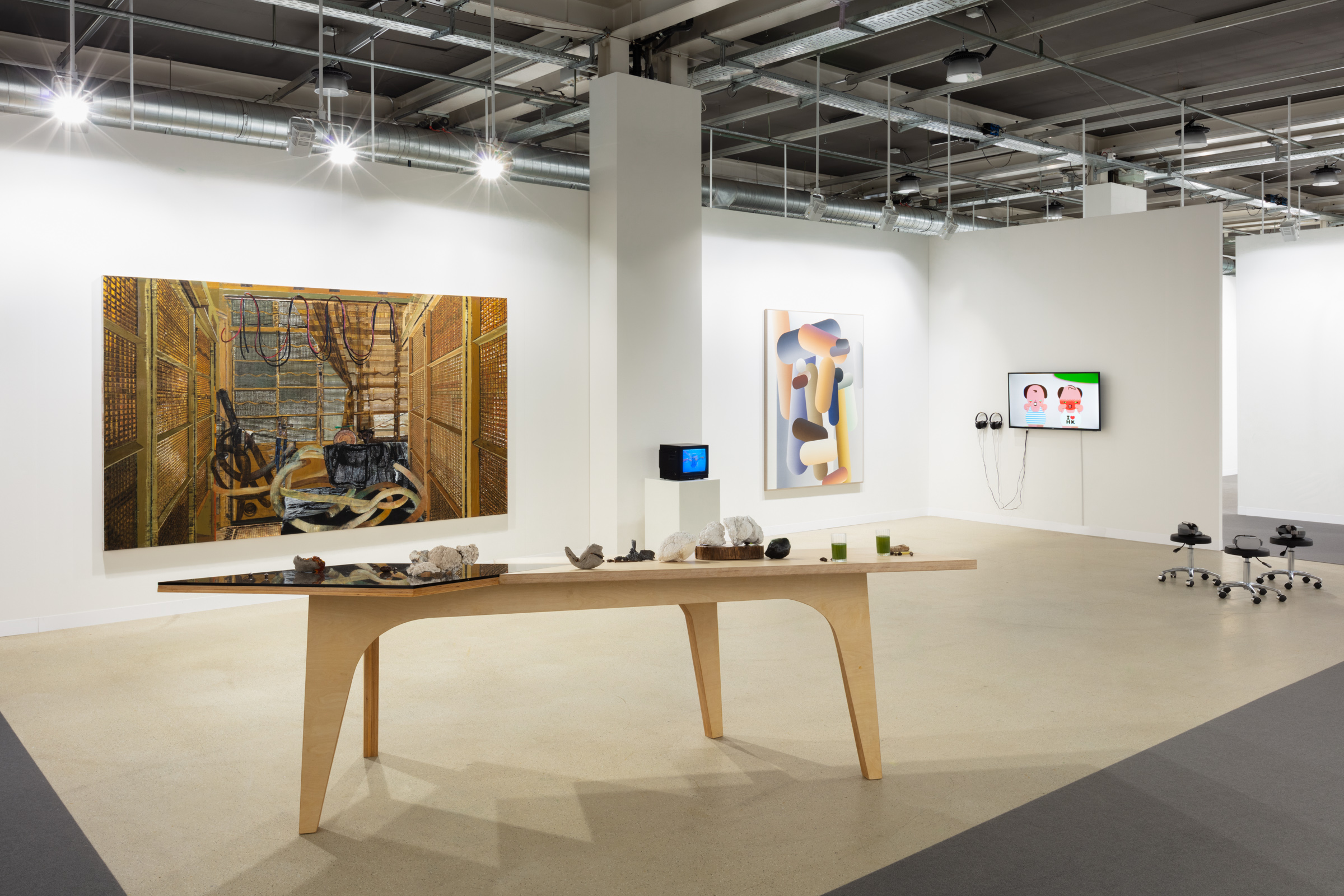