Samson Young (b. 1979) is a Hong Kong artist and composer who creates innovative cross-media experiences that touch upon the recurring topics of identity, war and literature. Presented will be ‘Situation #7 Muted Boxing Match’ (2017), part of Young’s ‘Muted Situation’ series, which consists of a muted boxing match, visible through a lightbox, accompanied by headphones, to consciously suppress the sound-producing component of a boxing match. Also on display will be the new work ‘Coffee Table Music (some other causes for celebration) VI’ (2017), which addresses the possibility of visually representing Furniture Music. Young is a highly regarded composer and media artist based in Hong Kong who most recently represented Hong Kong at the 57th Venice Biennale in 2017. Holding a PhD in Music Composition from Princeton University (2013), Young has held multiple exhibitions worldwide, including the Kunsthalle Düsseldorf; Goethe-Institute, Hong Kong; Hiroshima City Museum of Contemporary Art, Japan; 4A Centre for Contemporary Asian Art, Sydney; Center on Contemporary Art, Seattle, amongst others.

Jeremy Everett (b. 1979, USA) creates works that exist as the fragment of a sentence, a lyrical exposé, released into the world with precise abandon. With an initial degree in Landscape Architecture, Everett traversed into the art of making. At the heart of his practice is finding the delicate balance between beauty and decay through a variety of techniques. For example, the fine layers of paint pigment that skim ‘Untitled (Broken Grid)’ (2017), and his crystalline formations using books and magazines as witnessed in ‘Untitled (Playboy)’ (2017), a once porn magazine. Everett is a highly celebrated emerging artist who has held solo exhibitions in Los Angeles, New York, Paris and Hong Kong, amongst other locations. Everett recently held a residency at Hooper Projects in Los Angeles and his practice has been extensively featured in publications and critical reviews including Phaidon, l’Officiel de l’Art, Muse Magazine, The New York Times, The Smithsonian Magazine, Flash Art, Modern Painters and ArtReview, amongst others.

João Vasco Paiva (b.1979, Coimbra, Portugal) is a Hong Kong and Lisbon-based artist who observes the complex and continuously shifting characteristics of objects and spaces. Paiva examines the particular lexicon of constructed, detruded or neglected units, systematically documenting, analysing and abstracting them to compose a process-driven composition that is simultaneously an artwork. Presented is the concrete sculpture ‘Green Island Cement Factory 4’ (2016), which on the one hand by way of its title refers to a cement brand, whilst equally mounting a discourse on the urban dialectic and contemporary ruin. Paiva is a leading emerging contemporary artist who has been exhibited widely from Hong Kong and Portugal to the UK, Australia, Hungary and New York. Recently, Paiva presented two major installations at the Jardin des Tuileries, Paris and held a solo exhibition at Museu Nacional de Arte Contemporânea do Chiado, Lisbon as well as a citywide public project with Media Art Asia Pacific (MAAP), during the 8th Asia Pacific Triennial (APT8) in Brisbane, Australia. In 2015, he was selected for the Encounters section of Art Basel Hong Kong by Alexie Glass-Kantor. Finally, Paiva is the recipient of multiple awards, including the Hong Kong Emerging Artist Grant and the International Artist Support Grant awarded by the Calouste Gulbenkian Foundation in Portugal. His work is held in the permanent collection of the Israel Museum, Jerusalem.

Eric Baudart (b. 1972, France) flushes everyday, commonplace utensils of everyday contextualisation and repurposes them to create oeuvres that titter on the edge of artifice. Baudart pursues a practice that evolves from Duchamp’s readymade, whilst simultaneously devolving from it; the works or situations proposed are not mere found objects but rather reconfigured and repurposed, composed and re-choreographed materials that have been carefully assembled or molded to mount a delicate ballet of shapes, colour and form. On view will be Baurdart’s ‘Millimetré Graph Paper CMYK (yellow)’ (2017), which at first instance appears as a painterly abstraction but is actually the product of the disciplined millimetre-by-millimetre act of scratching thick architectural paper. Baudart has been widely exhibited internationally with exhibitions at the MAMCO, Geneva; Le Petit Palais, Paris; La Centrale for Contemporary Art, Brussels, amongst other locations. In 2017 he held a major solo show at Edouard Malingue Gallery, Shanghai, which included an installation along the Westbund. In 2011 he was the recipient of the Meurice Prize for contemporary art. Moreover, his practice has been written about in multiple publications, including Mousse Magazine, Slash Paris and The Wall Street Journal. Baudart’s work is held in various notable museum collections, including the MFA, Boston and the MAMCO, Geneva.

Wong Ping is a Hong Kong born and raised artist who discusses his observations of society, from teenage to adult-hood, using a visual language that sits on the border of shocking and amusing. In a sexual sense, Wong introduces the poles of desire and obsession – animating, illustrating and describing acts or scenarios that are brutally honest, or indeed, compose our personal, ‘evil’ shame. On view is Wong Ping’s single channel video animation, ‘Witch’ (2015), which displays a witch riding a penis as broomstick, the all a playful take on pixelated video games. Wong Ping is one of the Hong Kong’s most exciting emerging artists. His animations have been commissioned by M+, NOWNESS as well as Prada and he recently received one of Perspective’s ’40 under 40’ awards for his work. Moreover, Wong recently held a residency at the Chinese Centre for Contemporary Art (CFCCA) and has held exhibitions internationally in Miami, Manchester, Hong Kong, Istanbul, Berlin and Paris, amongst other locations. His animation films have been presented at numerous festivals internationally, from Belgium and the UK to Mexico and Australia, and have been reviewed in LEAP, ArtAsiaPacific and other publications. Wong’s work is held in several permanent collections including M+, Hong Kong.

Ko Sin Tung (1987, Hong Kong) investigates, through a myriad of mediums and materials, the mismatch between urban aspirations and actuality, as well as the psychological influences private objects project and the idiosyncratic functions they’ve been personally channeled to fulfill. In ‘One day, workers replaced the traditional high pressure sodium street lights with the new LED ones’ she documents how traditional road lighting has switched to LED lighting. In theory, with this half-sorrowful elimination of incandescent lighting, the new lights will illuminate the streets all the more clearly. Ko Sin Tung is a highly promising, emerging who graduated from the Department of Fine Arts at The Chinese University of Hong Kong. She has held major exhibitions in Hong Kong, Shanghai and most recently in Manchester at CFCCA. In 2012 she completed a residency at the Kunstnarhuset Messen, Ålvik, Norway. She has previously been exhibited at the 8th Vladivostok Biennale of Visual Arts, Vladivostok, Asia Society Hong Kong Center and Para Site, Hong Kong, amongst other locations. Ko Sin Tung has also been awarded multiple awards including Project Grant (Emerging Artists Scheme) from the Hong Kong Arts Development Council (2014), the Pure Art Foundation Grant 2013-2014 (2014) and Jury’s Special Prize of Huayu Youth Award (2016).

Cui Xinming (b. 1986, lives in Chongqing) is a rising Chinese artist who creates expansive oil on canvas works that express, in an elaborate and vivid painterly style, the tumultuous thoughts and reflections of a younger Chinese generation that is living through a period of constant change. On view will be Xinming’s oil on canvas, ‘Happy Chinese New Year’ (2017) that depicts a festive scene in what appears to be a village. Cui Xinming is a highly lauded emerging contemporary Chinese artist based in Chongqing. Recently selected for the prestigious 2015 ‘Luo Zhongli 10 Years Review Exhibition’ at the Chongqing MOMA, he has previously held solo shows in Hong Kong and has been exhibited in Shanghai, Istanbul, Berlin, Beijing and Chengdu, amongst other locations. In 2010 he was nominated for the 1st Zhang Xiaogang Graduate Contemporary Art Scholarship and came in third place at the 2nd Chinese Institute Annual Art Exhibition. His work has been featured in multiple publications, including the South China Morning Post, Art Info, The Art Newspaper, Oriental Daily News, Flash/On, and Artron.

Zheng Zhou (b. 1969, China) is a painter of instinct, conveying onto canvas observations from the world, as ad hoc as they may be. His strokes, furtive yet decisive, depict an urgency – to grasp, to depict, to capture that mesmeric multitude of the cosmos, the ‘phenomena’ we, or more precisely he, is a witness to. In ‘Soul Island’ (2017), ‘Witch’ (2016), and ‘Face I’ (2017), Zheng captures and entangles the variance of existence as defined by the possibilities of what is and could be, but also how one perceives it. Indeed, each painting acts as an epistemological outlet, a canvased portal unto a segment of our cosmos. A prolific painter, Zheng debuted by studying Printmaking at the Zhejiang Academy of Fine Arts, which led to a post at the Printmaking Department of the China Academy of Arts from 1994 to 1996. Zheng subsequently shifted his creative practice towards one of painting, pursuing a Masters in Oil Painting at the China Academy of Art from 1997 to 1999, following which he became a lecturer at the China Academy of Art Affiliated High School from 2000-2010. Throughout these years of tuition and pedagogy, Zheng painted, systematically, doggedly, before finally relocating to Beijing in 2013 to work as an artist. Zhou held his first major solo show at Edouard Malingue Gallery, Shanghai in 2017. 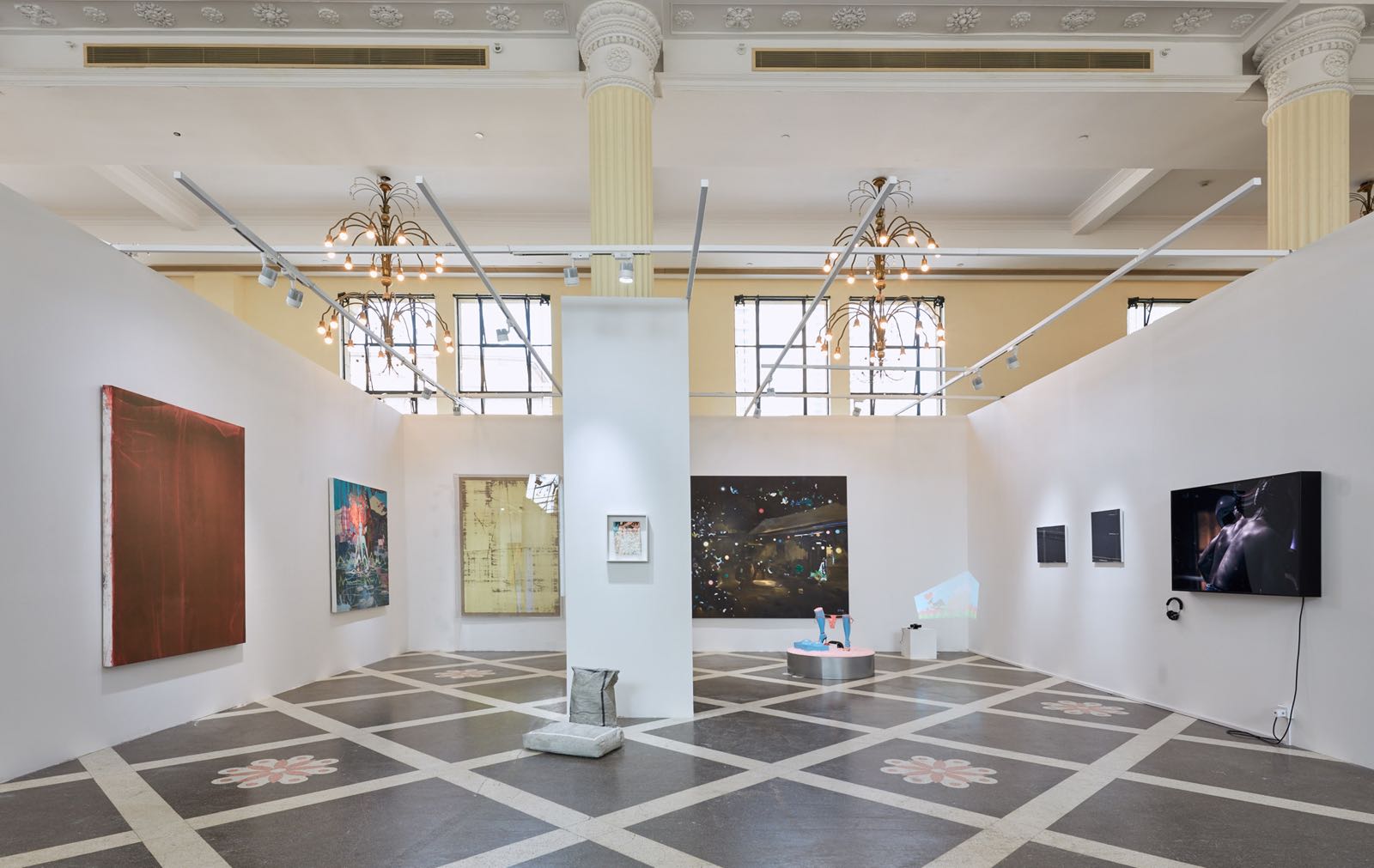