Delicately transposed, it’s the displaced materiality in Eric Baudart’s (b. 1972) works that spurs their contemporary resonance. Honeycombed plastic, millimetre paper, adhesive tape – everyday, commonplace utensils are flushed of everyday contextualisation and repurposed to create oeuvres that titter on the edge of artifice. Baudart has been widely exhibited internationally with group exhibitions at Bass Museum of Art, Miami (2014); the MAMCO, Geneva (2013); La Centrale for Contemporary Art, Brussels (2013); Le Petit Palais, Paris (2007), as well as solo exhibitions at the Fondation d’entreprise Ricard (2011) and La Maison Rouge, Paris (2007), among other locations. In 2011 he was the recipient of the Meurice Prize for contemporary art. Baudart’s work is held in various notable museum collections, including the MFA, Boston and the MAMCO, Geneva.

He Yida (b. 1980) currently lives and works in Shanghai. She graduated from Chelsea College of Art and Design, London in 2007. He Yida’s practice is not just an exploration of the language of sculpture, but also a reexamination of our cognitive process of familiar urban elements. Focused on presentation and representation, He juxtaposes actuality and image of things, which challenge the way idea forms. Exploring the sculptural language is an approach towards reality for He. Materials and forms carry their specific language of expression. Whether light or heavy, fragile or strong, the composition of the individual materials forms the expression. The presentation becomes the representation it carries. Without the projection of reference, the actual substance emerges. In He’s works, regardless of various forms and materials, “essential” and “core” are absent while “void” is always present. Using inessential things, abandoned elements and attachments, He Yida tries to shape the object with missing parts and re-examine our cognitive process of things. He’s sculptural language of superficiality and morphology simultaneously becomes a reality regenerated from images, as well as phantom haunted from behind. Her solo exhibitions include: Right Misplacement (A+ Contemporary, Shanghai, 2016), In Case (C-Space, Beijing, 2013). Her selected group exhibitions include: Very Natural Actions (Tai Kwun Contemporary, Hong Kong, 2019), Longan (House of Egorn, Berlin, 2019), A Tree Fell in the Forest, and No One’s There (Power Station of Art, Shanghai, 2018), NAN KAN: Inexplicit Ethics and De-ranking Perspective (Surplus Space, Wuhan, 2016), Alchemy (Between Art Lab, Shanghai, 2015), Peepshow (Long March Space, Beijing, 2015), Follow (MOCA Shanghai, Shanghai, 2011).

Graduated from the Guangzhou Academy of Art, Liu Yin (b. 1984) is an artist based Guangzhou and Hong Kong. Her darkly humoured images reflect upon our ever-growing complacent approach to media consumption. Liu changes what we see through imposing heavily stylised, fantastical, manga-style eyes and backgrounds to these found images, bringing to light the falsity of the image as the bearer of truth in our current age of fast-paced media. Her works have been exhibited at Taikang Space (2014, Beijing), Wiessensee School of Art (2014, Berlin), Observation Society (2010, Guangzhou), Adele C gallery (2009, Rome) and the Ecole Régionaledes Beaux Arts (2009, Besançon, France). Her work can also be found on the cover of the artist-published zine Feng Huo (馮火) which is printed monthly in Guangzhou.

What we perceive as real, the psychological nature of how we engage with objects and material, are running threads throughout the works of Nabuqi (b. 1984). Ranging from handmade sculptures to installations made from assembling readymades, there is a pull for the viewer to engage with detail and context, to be attuned to and reflect upon the spectrum between artificial and actual. As such, Nabuqi creates realms that prompt our understanding of the world around us and engage us in a play of spatial politics. Nabuqi plays with the optics and spectrum of observation, the programming that we accept and also question. Through addressing the familiar – nature, domesticity – the viewer is more deeply engaged in considering ‘presence’, how one perceives what is in front of them at present, what it was before and will be in the future. Nabuqi’s elaborate installations thus point to our epistemological idiosyncrasies and prompt, with wit and theatricality, a reflection on our constructed norms. Nabuqi graduated from the Central Academy of Fine Arts in 2013, and currently lives and works in Beijing. Her recent exhibitions include 58th Venice Biennale (Venice, 2019); Cold Nights (UCCA Art Centre, 2017); Absent Paragraph (Museum Beelden aan Zee, 2017); Any Ball (Central Academy of Fine Arts, 2017), The 11th Shanghai Biennale (2016) and the 10th Gwangju Biennale (2016). She has been nominated for the 2016 Art Sanya Huayu Youth Award.

Multicultural paradigms, weaved into a symphony of image and sound, are at the heart of Hong Kong artist and composer, Samson Young’s (b. 1979) practice. With a formal cross-cultural training in music composition, Young channels his attunement to melody by pushing it’s formalist boundaries to create innovative cross-media experiences that touch upon the recurring topics of identity, war and literature. Emphasising a sense of play and intellectual witticism through the inclusion of unexpected sounds, ranging from the ring of Gameboys, fanfare rides and Cantonese nursery rhymes, to references of great works of fiction, Young builds peculiar scenarios that challenge one’s everyday associations with objects, stories and spaces. Young was trained as a composer, and graduated with a Ph.D. in Music Composition from Princeton University in 2013. Young has had solo exhibitions at Mori Art Museum, Tokyo (2020); Ryosoku-in Temple, Kyoto (2020); The SMART Museum of Art, The University of Chicago, USA (2019); Talbot Rice Gallery, The University of Edinburgh, Edinburgh (2019); Hong Kong Visual Arts Centre (2019); Centre A in Vancouver (2019); M+ Pavilion in Hong Kong (2018); Centre for Contemporary Chinese Art in Manchester (2017); Kunsthalle Düsseldorf (2016); and Hiroshima City Museum of Contemporary Art (2015), among others. In 2017, he represented Hong Kong in the 57th Venice Biennale. Group exhibitions include Performa 19 Biennale, New York (2019); Gropius Bau, Berlin (2019); Solomon R. Guggenheim Museum, New York (2018); Biennale of Sydney (2018); National Museum of Art, Osaka (2018); National Museum of Modern and Contemporary Art, Seoul (2017); and documenta 14: documenta radio (2017) amongst others. Furthermore, he has participated in multiple festivals, as well as been the recipient of several prizes, including the 2015 BMW Art Journey Award and 2018 Hong Kong Art Centre Honorary Fellowship. Further awards include Artist of the Year (Hong Kong Arts Development Council, 2013), Prix Ars Electronica (2012, 2019), Bloomberg Emerging Artist Award (2007).

Yu Ji (b.1985) lives and works in Shanghai and Vienna. Yu Ji’s current practice is motivated by the ongoing investigation into the specific location with geography and historical narratives. Her works have been associated closely with field researches, and show a strong interest in the intervention of specific space with the body. Taking materiality of the media she employs as the starting point and sculpture as the core, Yu Ji has been developing and enriching her own vocabulary of art. Her performances that happen together with exhibitions of her sculptures, reflecting and moderating the fragile presence of human and objects in their everyday environment, often turn the space of art into the site of labor. Yu Ji has exhibited globally, including the 58th Venice Biennale (2019), Tensta Konsthall, Sweden (2018), Rockbund Art Museum, Shanghai (2017), 11th Shanghai Biennale (2016), Palais de Tokyo, Paris (2014), amongst others. In 2017 Yu Ji was nominated for the Hugo Boss Asia Art Award. Upcoming exhibitions include a major solo exhibition and commission at Chisenhale Gallery, London (2021).

Zheng Zhou (b. 1969) was born in Wenzhou, Zhejiang, China. A graduate from the Zhejiang Academy of Fine Arts in Printmaking from 1990 to 1994, Zheng worked at the Printmaking Department of the China Academy of Arts from 1994 to 1996. Since 2000, Zheng Zhou has been a lecturer at the China Academy of Art Affiliated High School for 10 years. Zheng relocated to Beijing where he has been working as an artist since 2013. Delineated contours, a subconscious blur of decipherable imagery and extraneous elements, a wistful expressive tide between the figurative and the abstract; Zheng Zhou is a painter of instinct, conveying onto canvas observations from the world, as ad hoc as they may be. His strokes, furtive yet decisive, depict an urgency – to grasp, to depict, to capture that mesmeric multitude of the cosmos, the ‘phenomena’ we, or more precisely he, is a witness to. 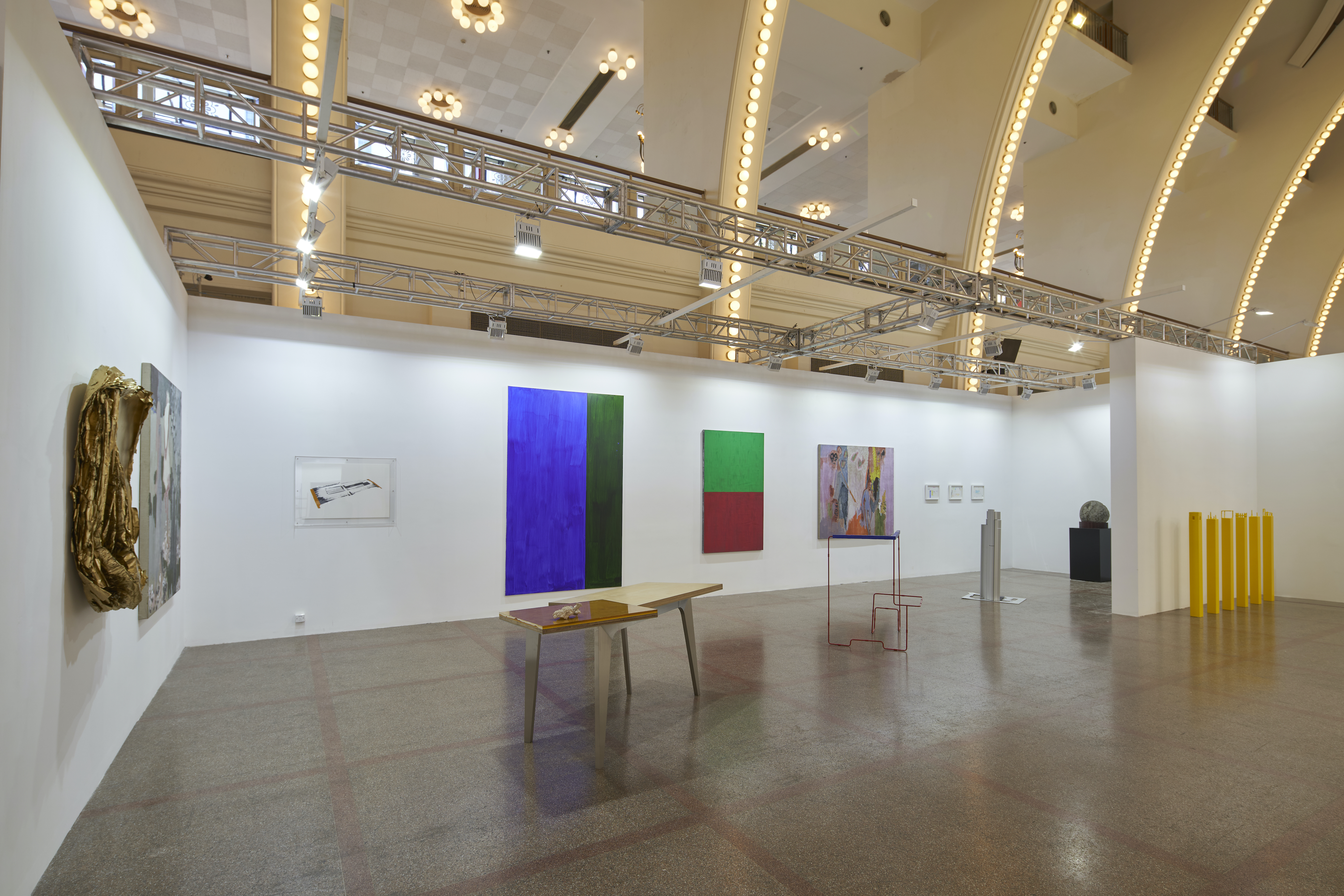