Brook Hsu’s paintings are living and breathing, fueled by a commitment to her visual language. Comfort and illness reside in verdant shades, amplifying the artist’s role as practitioner of care and synthesizer of personal experience.

Hsu insists that formlessness takes its own shape, resulting in an unbridled swell of abstract and figurative forms. Skeletons, girls and hares – expressions of animation within and beyond the mortal realm – emerge alongside efforts to maintain painting’s viability. Loops and lines commingle in sensuous fields of green and blue. Iron oxide enters as a violent sabotage, disrupting the more pensive hues while also providing complement to them: red as love and anger, green as tranquility and nature: It’s an unholy matrimony of opposites. Hsu just can’t seem to find her way out of green. Conceptual double binds execute the same tempestuous dance in her practice: love and death, violence and desire, bittersweetness. She reconciles differences by encouraging communion.

Tragedy strikes and so does the brush. The content of Hsu’s work is generated in service of satisfying a painful event by transmuting it into something else. In the act of painting, rehearsals and demonstrations of love are fostered by affection and time invested. Koether’s maxim provides a competitive dimension, “Can desire be reinvented with and in painting? Slowly against the tide?” (Hsu has transcribed part of this lecture on fluorescent orange paper, which is on view in the gallery). The crisis of love and desire cannot be understated – nurture sustains the former while lack prompts the latter. This becomes a paradox that Hsu is tasked with working through. Desire proliferates as she paints, mirroring that of a lover who seeks an embrace from the Other. Consequently, an erotic tether is inscribed within the compositions – they become loving objects.

Drawing and reading are foundational to Hsu’s practice, her literary reference points making themselves known, whether scrawled on paper or evidenced in forms. Her drawings are intrinsically diaristic – providing the closest access point to the artist’s most intimate domain. “Drawing is a great school of truth and exactingness” proclaims Balthus! This exhibition is the first time that Hsu’s works on paper are viewable alongside her paintings, registering as a gesture to elevate drawing onto the painting field. The intimacy of pen and paper becomes maximized by its transformation on the canvas. One can see Hsu’s consistent elaboration of forms alighted on different surfaces.

The spiral is a recurring form, compelling due to its uncategorical nature as either abstract or figurative. Its communicative properties are based in the eye of the beholder and the producer at once, an arcane exchange. Building an alphabetical code out of its symbology and eternal promise, Hsu asks again and again, “What is a spiral?” In one composition, beneath a tangle of stains rendered in blue, green and red, “SCIENCE” is written in a spiral script.

In an interview with Benjamin H. D. Buchloh, Jutta Koether professed “I tried to find operations to pull painting into a problematized terrain where it could perform a change on its own terms, where it could develop into something that was not merely rehashed or pastiched but actively dealt with its own fucked-up history, its pleasures and pains,” a distinct onus in Hsu’s practice as well. She is a disciple of her predecessors – making her references known. A Koether and Balthus union rendered with her specific formalism. Hsu’s process is nonetheless sustained between canvases, an untitled ink composition and Oranges each bear Hsu’s signature mark-making. The latter partially exposes an illustrative skull-and-bones figure carrying a heap of orbic fruits – an energetic counter to Cézanne’s placid still lifes.

In Hsu’s Pan et son élève, Pierre Klossowski’s Satan and flute player are replaced by two blue skeletons. Hsu’s contemporary manifestation is discrete and suffused with frivolity as she pares down the original’s perversities. She performs an operation of sketches rather than rendering minutiae, subsuming antecedents within her own vocabulary, searching and destroying in an infinite loop. Klossowski astutely notes that “Intensity is subject to a moving chaos without beginning or end,” with one’s self as the most dynamic sign, “Everything is led back to a single discourse, namely, to fluctuations of intensity that correspond to the thought of everyone and no one.” Frames of reference yield to this proverb: authorship remains an unstable tension prone to
updates and divergences.

Olympia sees a grid set faintly beyond a skeleton sprawled out atop a mess of books. The geometry is fussily doubled in the unorganized collection of literature situated at the painting’s fore. What’s crucial here is the painting’s relationship to Manet, made explicit by its title and exacted in the cartoonish figure’s sprawl as it improvises the original’s prostitute. Death and knowledge appear again in Meet Me at the Library, this time with sex as a new recruit. The two boney figures copulate in a similar pile of books, this time with haphazard shelves mounted in the background. Hsu reproduces settings and subjects with intrepid revisions, destabilizing whatever mythos her viewers may come to understand in other works. She poses affronts to her own oeuvre as well as to those of artists with whom she shares a lineage.

Hsu’s material approach is deeply entwined with the work of other artists. In regard to her use of fabric, this is especially the case with Sigmar Polke. Hsu invokes his tripartite usage of fabrics as ground, form, and iconography (Christine Mehring identifies this approach in the essay “Polke’s Patterns”). How can sourced materials aid in the compositional process? How does the tangibility of cloth furnish context, texture, and form? Ink stains these textiles – art and design are staged in harmony and conflict at once. Subject is the point at which the two artists’ paths diverge. Hsu paints in deference to old masters, the portrait of a girl persisting over the fabrics. In contrast to Polke’s women-as-material, the agency of Hsu’s girl is presupposed by defiant stances, sensitive linework, and repetition of form.

Allegories, personal experience, fact, fiction, and cultural products are all embedded in a fertile mass of reference material. Hsu’s inspirations and modes of creation are porous, consistently seeping into one another, and ultimately through her filtration system. She establishes a catalog of touchstones in an effort to renegotiate epochal virtues. Hsu’s endurance as a painter is inscribed with love’s status as a verb – continuity defines “success” in both endeavors. In seeking understanding she finds herself enmeshed within painting’s historicity and its ability to rupture time’s supposed linearity. 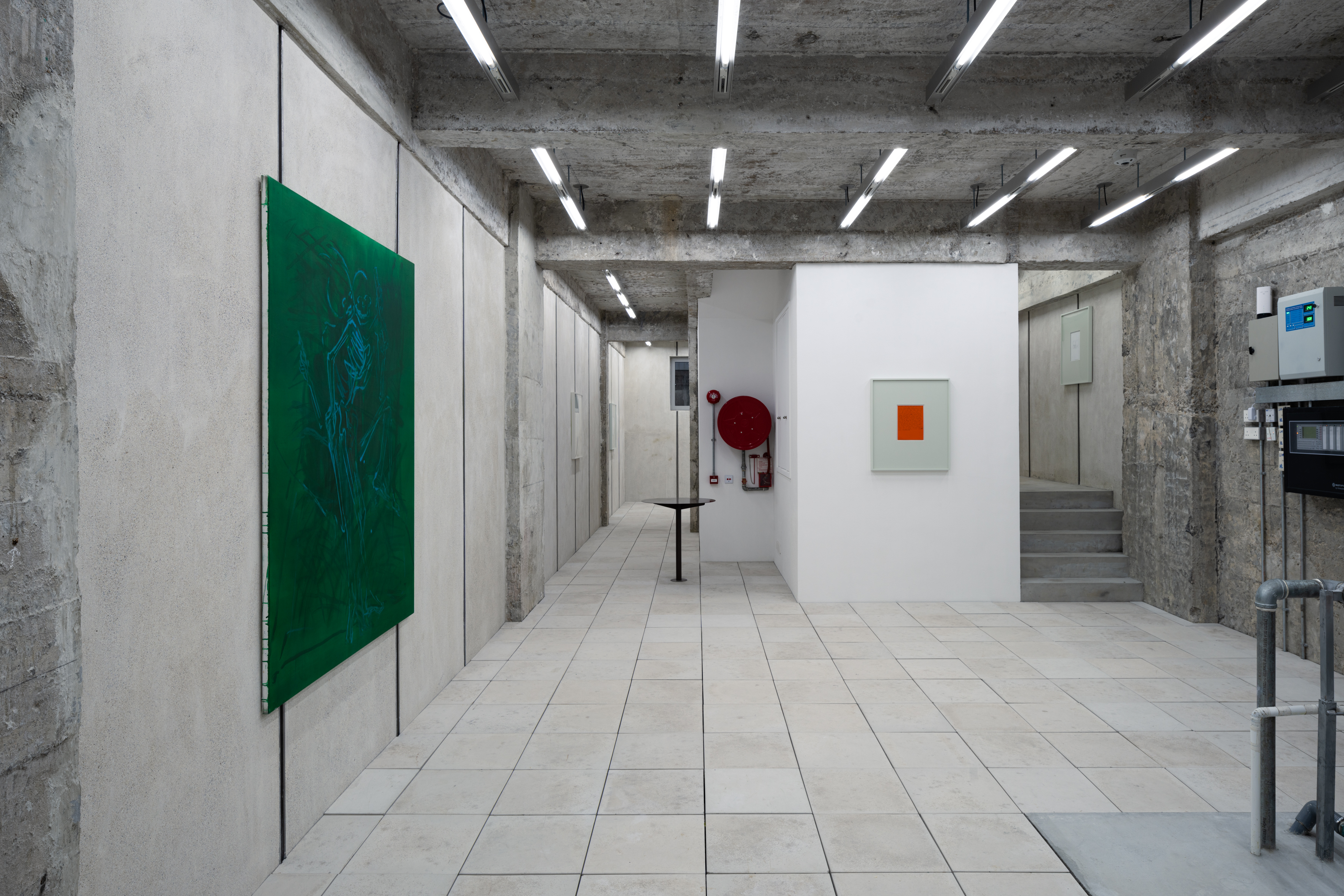