Weaving notions of repetition and musicality, ‘Choruses’ is a group exhibition presented by Silverlens, Manila at Edouard Malingue Gallery, Hong Kong as part of the two galleries’ ongoing collaborative exchange. Bringing together the work of Genevieve Chua (b. 1984, Singapore), Martha Atienza (b. 1981, Philippines), Maria Taniguchi (b. 1981, Philippines) and João Vasco Paiva (b. 1979, Portugal), the show moves between sculpture, video, painting and mixed media works, pointing to a melodic sense of cyclicality, both literally and more widely as an expression of how things develop and evolve.

Genevieve Chua creates mixed media works on an unfurling narrative informed by natural history and linguistics. Primarily working with abstraction, Chua’s pieces are contingent realities presented as installations, images, and objects. Chua’s ‘Ultrasound’ series, for example, depicts aerial geological compositions on linen, which poetically seem to present a near nostalgic view of fluctuating earth. Referencing music more directly, her ‘Mnemonic Staccato’ series is composed of several shaped canvases that have similar geographic abstractions on them, each jutting from the wall in serial alignment, punctuating space. Also on display are works from Chua’s ‘Swivel’ series that appear as sculptural formations of sinuous and undulating geometric shapes. Resembling musical notes as seen across a score except in inverse monochrome white, there is a playful sense of ease in their contortions, an organic nature to their dance-like twists.

Moving towards the realm of video, Martha Atienza creates installations drawn from her Filipino and Dutch background. Interested in the precept of a ‘stranger’ and how it emanates as a crevice between the operations of understanding and imagining, Atienza’s work is an ongoing series of an almost sociological nature that studies her direct environment. On display is ‘Anito’ (2015), which documents a festival, the notion of repetition emerging in the fact these collective celebrations occur over and over again, the video being updated each time. Narrowing on the moving bodies, shifting in rhythm to the pulse of the street, a superimposed beat immerses the viewer into a trance-like state, leaving us as observers to this contemporary civilian ritual across ages.

Drawing an additional focus on the notion of alternate repetition are the ‘brick’ paintings by Maria Taniguchi. Delicately rendered in near black monochrome, Taniguchi allows for a faint white outline of each tile, pointing to a composite of parts. Lightly resting on the floor against the gallery wall, they allude to a sense of scaling, individual yet collective realisations of a whole. Deliberate and precise, the surfaces are neither uniform nor static, altering in reflection according to one’s physical presence in relation to the work. A manner of creating an organised structure we may seem them as an analytic response to urban chaos bordering on the minimal and sculptural.

Building on notions of cyclicality, João Vasco Paiva considers via the urban the push and pull between construction and eventual dereliction. This conundrum is emphasised by Paiva’s casting of everyday objects from contemporary sneakers and life-size modular kitchens to the cardboard slabs domestic helpers use as ephemeral structures on Sundays. Using materials ranging from black lava rock to concrete, Paiva extends the ordinary’s temporality whilst highlighting the cycle of human action. Moreover, Paiva points to what we assign value to or more crucially do not, thus reflecting on the aesthetic properties of the ‘non’ and eventual contemporary ruin.

Ultimately, ‘Choruses’ brings together artists from different disciplines and considerations to mount an aesthetic and conceptual enquiry of that which occurs and reoccurs, and what is to remain and be remembered, in a manner akin to that verse one repeatedly hears and hence recalls.

Selected solo exhibitions include Parabola (2014); Cicadas Cicadas (Los Angeles, 2014); Birthing Ground not a Sound (Singapore, 2012); Adinandra Belukar at the Singapore Biennale (2011); and Full Moon and Foxes at the Atelier, National Museum of Singapore (2009). She was a recipient of the NAC Georgette Chen Scholarship in 2003–04 and the Young Artist Award in 2012 conferred by the National Arts Council, Singapore. The artist has also participated in shows, such as Future Proof (Singapore, 2012); BMW Young Asian Artist Series II (Singapore, 2011); Art Project Ideas at Hiroshima MOCA (Japan, 2011); Cross-scape at the Kumho Museum of Art (South Korea, Seoul, 2011); Shadow in the Dark (Hong Kong, 2011) and CUT 2009: Figure, New Photography from Southeast Asia (Kuala Lumpur; Singapore, 2009).

Born in Manila, Philippines to a Dutch mother and Filipino father, Martha Atienza (b. 1981) has moved between both countries and cultures throughout her life. She was awarded the Baloise Art Prize in 2017 Art Basel Statements. She was also one of the five shortlisted for the Benesse Art Prize for the Singapore Biennale. In 2015, Atienza was awarded the Thirteen Artists Awards by the Cultural Center of the Philippines. In 2016 and 2012, she received the Ateneo Arts Award with studio Residency Grants in Liverpool, Melbourne, New York and Singapore. In 2009, she joined a residency at Green Papaya Art Projects in the Philippines. In 2006, Atienza received her Bachelor in Fine Arts from the Academy of Visual Arts and Design in the Netherlands. She also participated in the art program at the Kuvataideakatemia in Helsinki, Finland, in 2005. Previously, she has exhibited video art, often described as snapshots of reality, as part of installations in galleries. Her works have been exhibited internationally at various art spaces, galleries, and video festivals. She is also the recipient of the first Mercedes Zobel/Outset Residency at Gasworks in London (2016).

Maria Taniguchi was born in Dumaguete City, the Philippines, in 1981. She won the Hugo Boss Asia Art Award in 2015 and was a LUX Associate Artist in 2009. Recent exhibitions include History of a vanishing present: A prologue, the Mistake Room, Los Angeles (2016); Afterwork, Para Site, Hong Kong (2016); Globale: New sensorium, ZKM Centre for Art and Media, Karlsruhe, Germany (2016); The vexed contemporary, Museum of Contemporary Art and Design, Manila (2015); and the 8th Asia Pacific Triennial of Contemporary Art, QAGOMA, Brisbane (2015). Her work is held in a number of collections including the M+ Museum, Hong Kong; the Burger Collection, Hong Kong; Kadist Art Foundation, San Francisco; QAGOMA, Brisbane; and the K11 Art Foundation, Shanghai.

João Vasco Paiva has been exhibited widely from Hong Kong and Portugal to the UK, Australia, Hungary and New York. Recently, Paiva presented two major sculptural installations at the Jardin des Tuileries, Paris, held a solo exhibition at Museu Nacional de Arte Contemporânea do Chiado, Lisbon and a citywide public project with Media Art Asia Pacific (MAAP) during the 8th Asia Pacific Triennial (APT8) in Brisbane, Australia. In 2015, Paiva was selected for the Encounters section of Art Basel Hong Kong. Prior to that, he completed a residency at Lichtenberg Studios, Berlin and was part of a group exhibition at the Witte de With, Rotterdam as well as a travelling exhibition at Artsonje, Seoul and OCT Contemporary Art Terminal, Shanghai. Furthermore, he held a major solo exhibition at the Orient Foundation in Macau as well as Counter Space, Zurich. Finally, Paiva is the recipient of multiple awards, including the Hong Kong Emerging Artist Grant and the International Artist Support Grant awarded by the Calouste Gulbenkian Foundation in Portugal. His work is held in the permanent collection of the Israel Museum, Jerusalem. 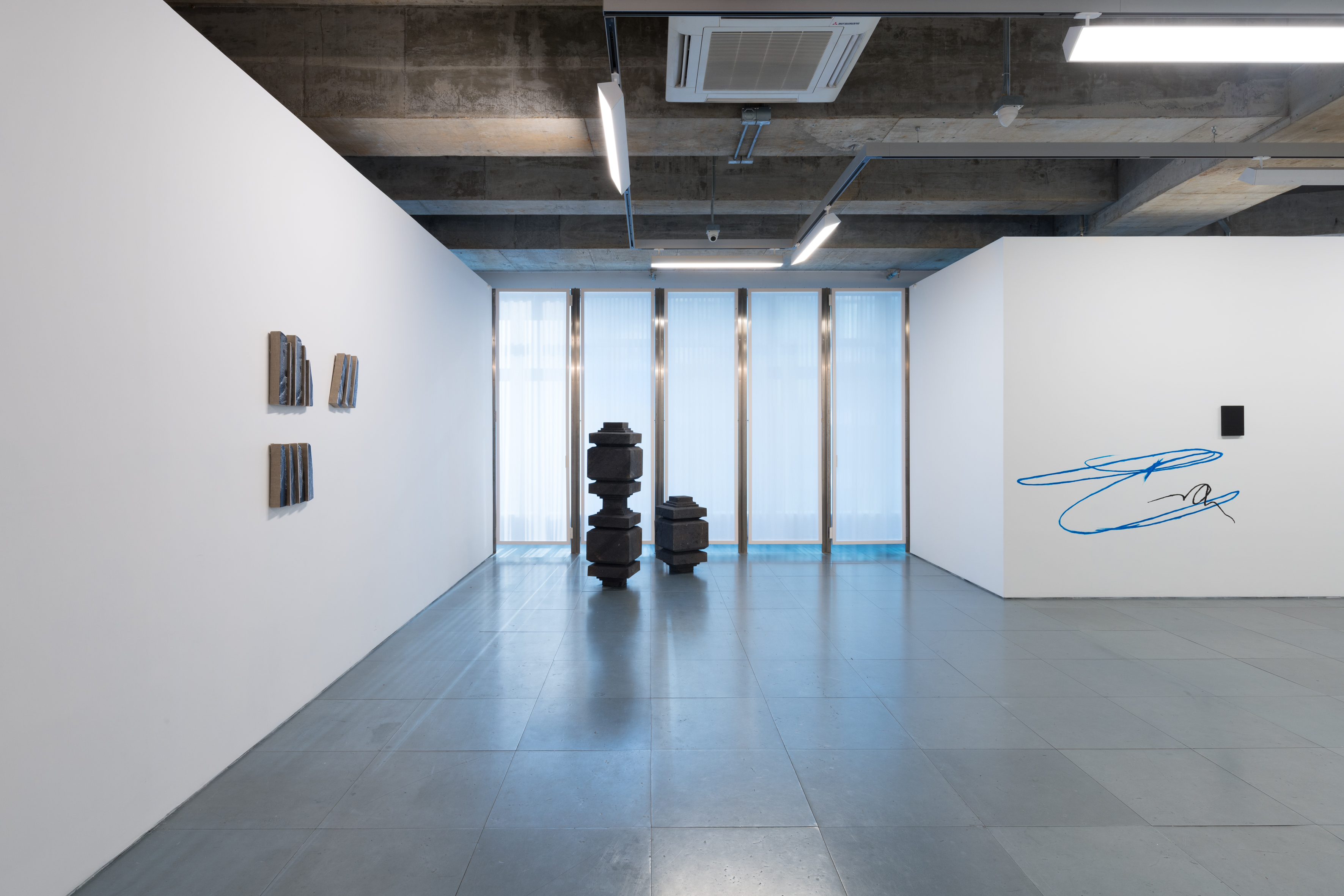