Returning to Gallery Weekend Beijing in 2022, Kiang Malingue is pleased to present Chou Yu-Cheng (b.1976, Taipei) solo presentation Sedimentary Gradient, showcasing ten paintings created in the last two years. Appearing for the first time in Beijing, is Chou’s Moody series of distinct abstract compositions conceived at the peak of the pandemic in 2020, and the consecutive series of Bibiliotheque and Water, Color & Paper, dealing in ever sophisticated fashions with the nuanced equilibrium of matters and motion.

Moody emerges directly from the global pandemic situation: facing extreme uncertainties regarding the future and filled with awe, Chou Yu-Cheng conceived the series that on an exceptional level pertains to subjective feelings, affect and sentiments. For the artist, the flawlessly rendered, highly digital surfaces speak less of continuation of life in the virtual realm, but more of rupturing and suspended experiences in everyday reality. Chou views the works as anthropomorphic entities, simulating facial expressions or human moods at critical moments of collapse.

Working on Moody and ensuing series, the artist has to learn and take full control of flow in relation to gravity: the remarkably fine gradient patterns on paper mounted on canvas are all results of meticulous handling, as Chou Yu-Cheng balances torrents of contrasting acrylic paint, and ensures that on super-flat Italian Fabriano paper the mineral-based particles are strictly ordered and arranged. After the precise colouring process, Chou then plays with various compositions before collaging and mounting the shaped papers on canvas. Chou also draws an analogy between the singular painterly process and the notions of sedimentation and pollution: just as natural and human forces create riverbeds, layered geological formations, vast sites of waste and even visible air pollution in particularly the age of Anthropocene, Chou’s latest painterly practise demonstrates the ways in which irreducible material components insidiously shape the world in a painting.

Departing from the technical and material aspects of Moody and playfully named Water, Color & Paper, a new series in the exhibition of Sedimentary Gradient introduces rectangular shapes, and is in active conversation with the history of abstract art. For the artist, his recent painterly practises come closer to Cy Twombly’s mark- making than to Mark Rothko’s colour fields: by introducing elements that are apparently digital and arbitrary, and by placing emphasis on the individual signifiers, the multi-layered artworks invoke a renewed notion of mono-chrome, redefining what constitutes and differs a colour from another. In the monumental series of Bibliotheque, Chou Yu-Cheng further systematises the rectangular shapes that are solemn in essence: taking as its starting point the quotidian quest of charting a nice-looking bookcase, the Bibliotheque series presents the audience with pseudo-private scenes that are unprecedentedly ordered, and chaotic. 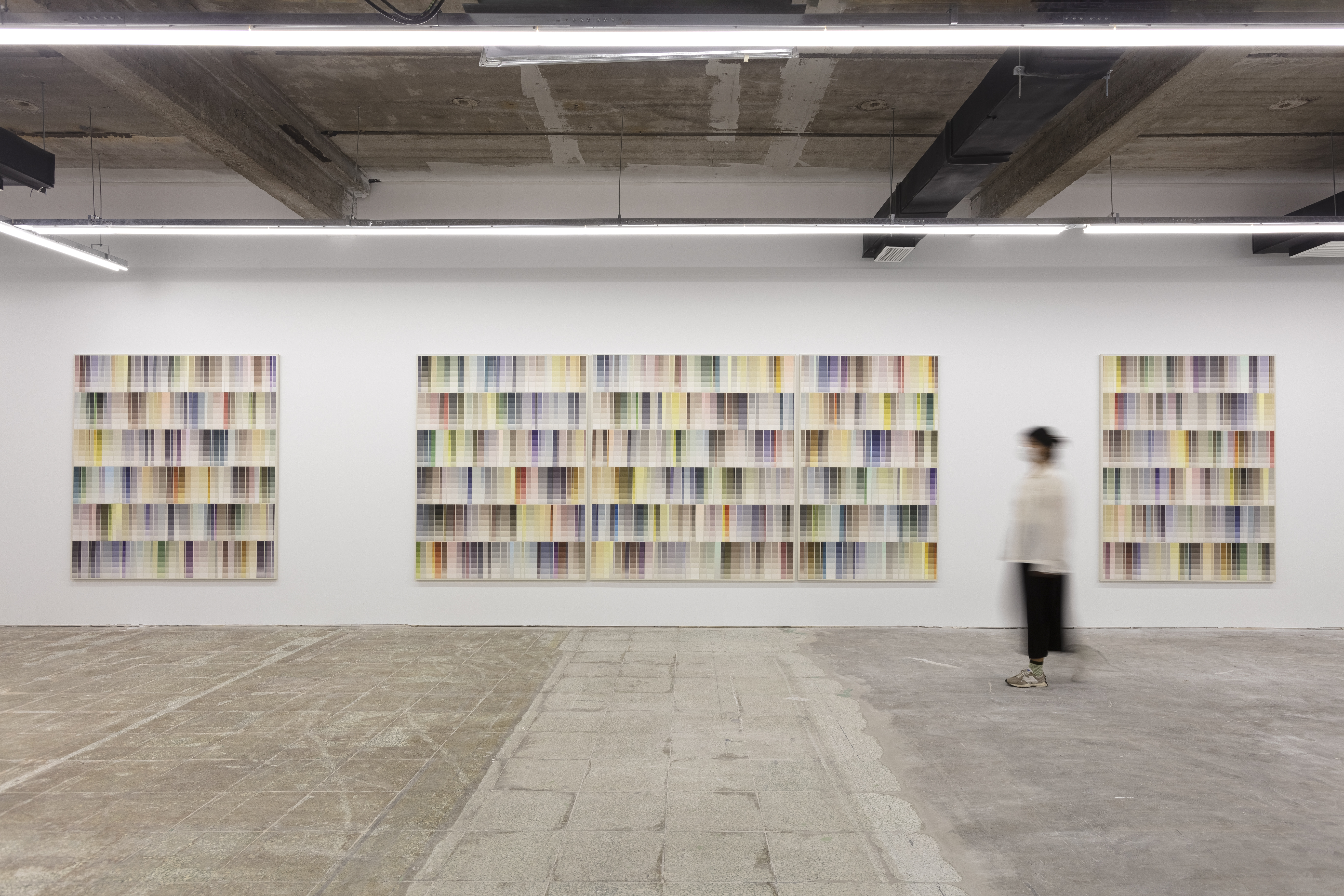