Journey to the East

Edouard Malingue Gallery is pleased to present ‘Journey to the East’, a solo show with the emerging Chinese artist Cui Xinming (b. 1986, lives in Chongqing). A recent graduate from the Sichuan Academy of Fine Arts, Cui Xinming creates expansive oil on canvas works that express, in an elaborate and vivid painterly style, the tumultuous thoughts and reflections of a younger Chinese generation. Presenting a new body of work, the exhibition follows from Xinming’s previous practice yet displays a remarkably luminous development in his painting technique. The vibrant, red-toned glow that permeates these new works heightens how, at the heart of Xinming’s oeuvre, is his unique ability in capturing the inner turmoils experienced when undergoing a phase of personal development. Indeed, Xinming is an observer, a highly introspective artist who examines himself, his position with regards to society and the values of those who surround him. Where words do not capture his sentiments, Xinming approaches the canvas with incredible vigour and treats it as an extension of his visions and internal tensions, casting upon it incredulous scenarios and hypnagogic happenings.

Although Xinming’s paintings borrow elements from the quotidian, these scenes are not figments of a universal reality; rather, they are dramatic and subliminal visions that Xinming’s mind has conjured. This is not to say, however, that his works do not bear a real-world relevance; on the contrary, each work is laced with secondary meaning, ranging from political to religious commentary. In Empire is a dream (2014), for example, Xinming depicts three figures in ornamental Empirical dress standing behind an altar upon which incense sticks have been placed as well as a red card bearing the sign of luck. Despite the details of their robes, the faces of each of the figures are concealed, creating a sense of eeriness, a feeling that is heightened by the surrounding monkeys, which given their animated postures, seem even more alive than the figures themselves. As such, Xinming comments on the emptiness of humanity, the animality of our society and breaks down perceived illusions of grandeur.

Privy to Xinming’s thoughts and visual narrative, one feels approximate to a trespasser, an infringer upon a terrene that is very much the artist’s own, for these are visions that stand on the border of personal tremors and inveterate hauntings. The painting Don’t hurt me (2014), for example, follows from Xinming’s interest in capturing an altered domestic and shows to the left of the canvas what seems to be a commonplace home interior; an ornate dark sofa, faced by a low-rise wooden coffee table. As your gaze traverses to the centre of the canvas, however, it becomes fixated on a fiery glow and the profiled outline of a kneeling figure. Face turned, it is uncertain whether the character is seeking to put out the mounting blaze, trying to protect himself, or is indeed caught in a limbo between the two acts. From the title of the oeuvre though, one can deduce the existence of a threat, a state that seems all the more peculiar given the usual comforts of a homely interior. Xinming thereby addresses the challenges of the domestic, the flame both acting and symbolising the variety of possible perils.

Overall, ‘Journey to the East’ presents a series of narrative paintings that are omniscient in quality and insightful in their socio-political commentary. Following from Xinming’s previous works, these oeuvres have a distinct literary angle in their visual recounting of a story. Fraught with complexity, Xinming’s paintings voice the qualms of his generation – its evolving relationship with traditions, values and beliefs.

Cui Xinming is a highly promising emerging contemporary Chinese artist based in Chongqing. He previously held a solo exhibition at Art Basel Hong Kong 2013 that received critical acclaim and has been exhibited in Istanbul, Berlin, Beijing and Chengdu, amongst other locations. In 2010 he was nominated for the 1st Zhang Xiaogang Graduate Contemporary Art Scholarship and came in third place at the 2nd Chinese Institute Annual Art Exhibition. His work has been featured in multiple publications, including the South China Morning Post, Art Info, The Art Newspaper, Oriental Daily News, Flash/On, and Artron.

Journey to the East    Cui Xinming 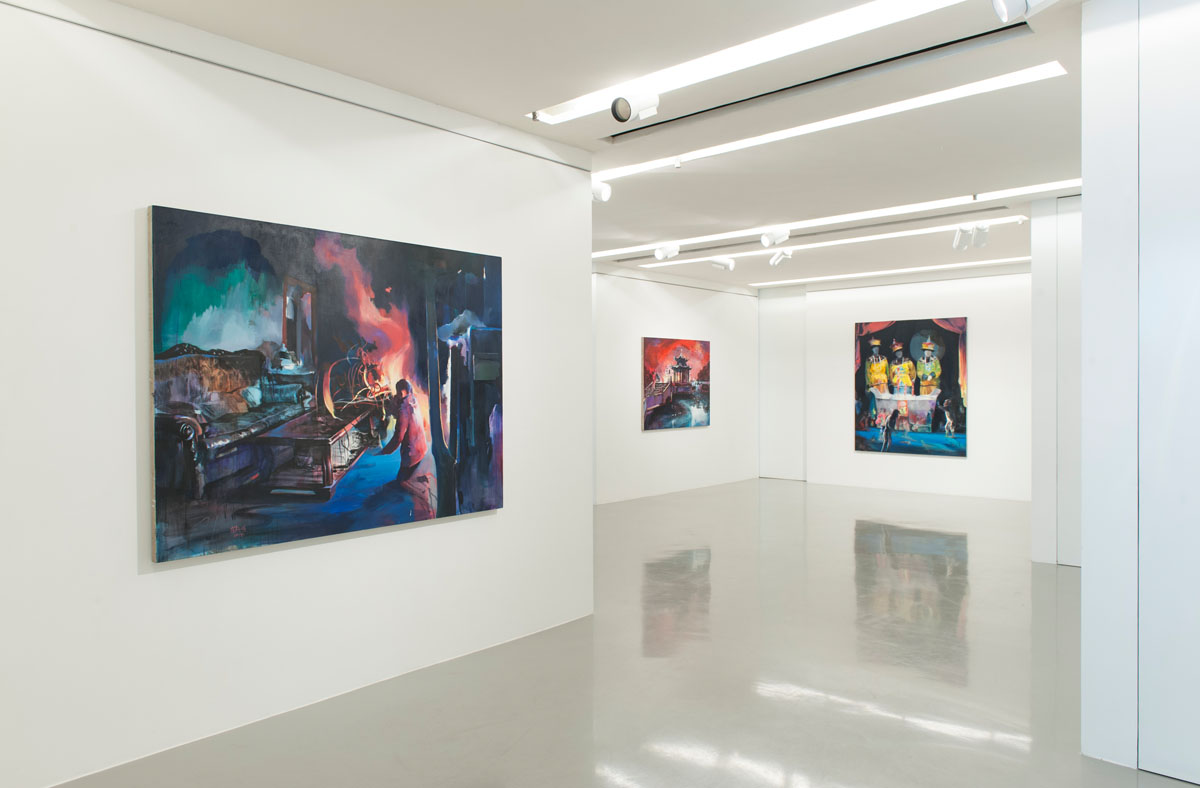