‘one, maybe two Parsecs’, Eric Baudart’s solo show at Edouard Malingue Gallery, Hong Kong refers to a unit of length or distance as coined to describe astronomical objects outside the solar system. Baudart uses this scientific rooting and also approach to discovery to address a process that involves the seeking of answers, which opens more questions: how what we know is that we’ll never know everything; how one may turn to understand a face or a piece of music, contemplate it, yet never completely solve it. Through a set of sculptural works and paintings that evoke Baudart’s continued interest in objects and materiality, he explores this condition of going towards what one does not know without fully conquering it.

Each work is dotted throughout the space as part of a constellation of individual discoveries. The sculpture ‘EqualAtoms’ stands as the first encounter and follows from Baudart’s running interest in collecting vintage detergent boxes, admiring their composition and colour, beyond their past utilitarian function. Placed in it is a cross, resting as an umbrella would in a stand, this juxtaposed placement hinting at once to the ritual of hygiene and consumption, yet also pointing to Baudart’s sharp sense of humour: the box, in a past life, treated ‘calcaire’ or limestone in English, a rusty growth that appears, in turn, to have taken over the cross. Through the composition of two found elements he creates a sense of visual irony and simultaneously points to the power of symbolism, evoking thoughts on habits and tradition, death and atomic universality.

This balance between a sense of play and the serious is extended throughout the exhibition. ‘Stephen Hawking’, for example, the sculpture which most directly relates to the show title by referencing the late brilliant physicist, is composed of a functional yet contorted chair, a direct reference to the man’s genius mind yet incapacitated physicality. Beyond this literal analogy, it serves as a reminder to not immediately judge upon appearances and the disparity, or lack thereof, between knowledge, function, aesthetics and beauty. Equally, it points to what outlasts us – thoughts, actions, minds – beyond what we immediately take, buy, use. A sense of visual tension, the varied spectrum of aesthetic to conceptual appeal, permeates Baudart’s other works. ‘CADDIE’, in its rusted hues of grey and copper, stands as a fossilised indicator of consumption, while ‘Storage Box’ rests as a shredded, textured and mangled vestige of abandon. Plastered in silver tape it signals to a sense of care but equally bounces light, taking on its own tonal qualities.

This sense of collage – layering, patching, protecting – is echoed throughout but in particular the ‘Painting’ series hanging throughout the space. Each work in this series, which in itself plays on what we traditionally consider painting, hangs as its own form of archeology. ‘Painting No. 1’ in its cracked painted wood aesthetic reminds one of an abandoned home, its texture resembling fabric traced by use and disuse, a hint of bright pink spray paint to the top left corner breaking up the otherwise monochrome palette. Similarly, the monotonal abstraction created by layers of cream blocks in ‘Painting No. 2’ is interrupted by the superimposition of a light orange sheath, the delicacy of this detail contrasting with the weight of other works in the room. Contrarily, ‘Painting No. 3’ and ‘Painting No. 4’ point more directly to the running theme of purchase, casting figures one sees on billboards as well as consumer items such as Coca Cola, staples to supermarkets and art historical movements, alike.

Ultimately, Baudart pours you into a pluralistic melting pot of considerations regards habits, values, economies, traditions and longevity. Crucially, he plays with your senses and assumptions, calling you to question, fundamentally – and as the exhibition title suggests – the limits of your knowledge and what stands the tests of distance and time. 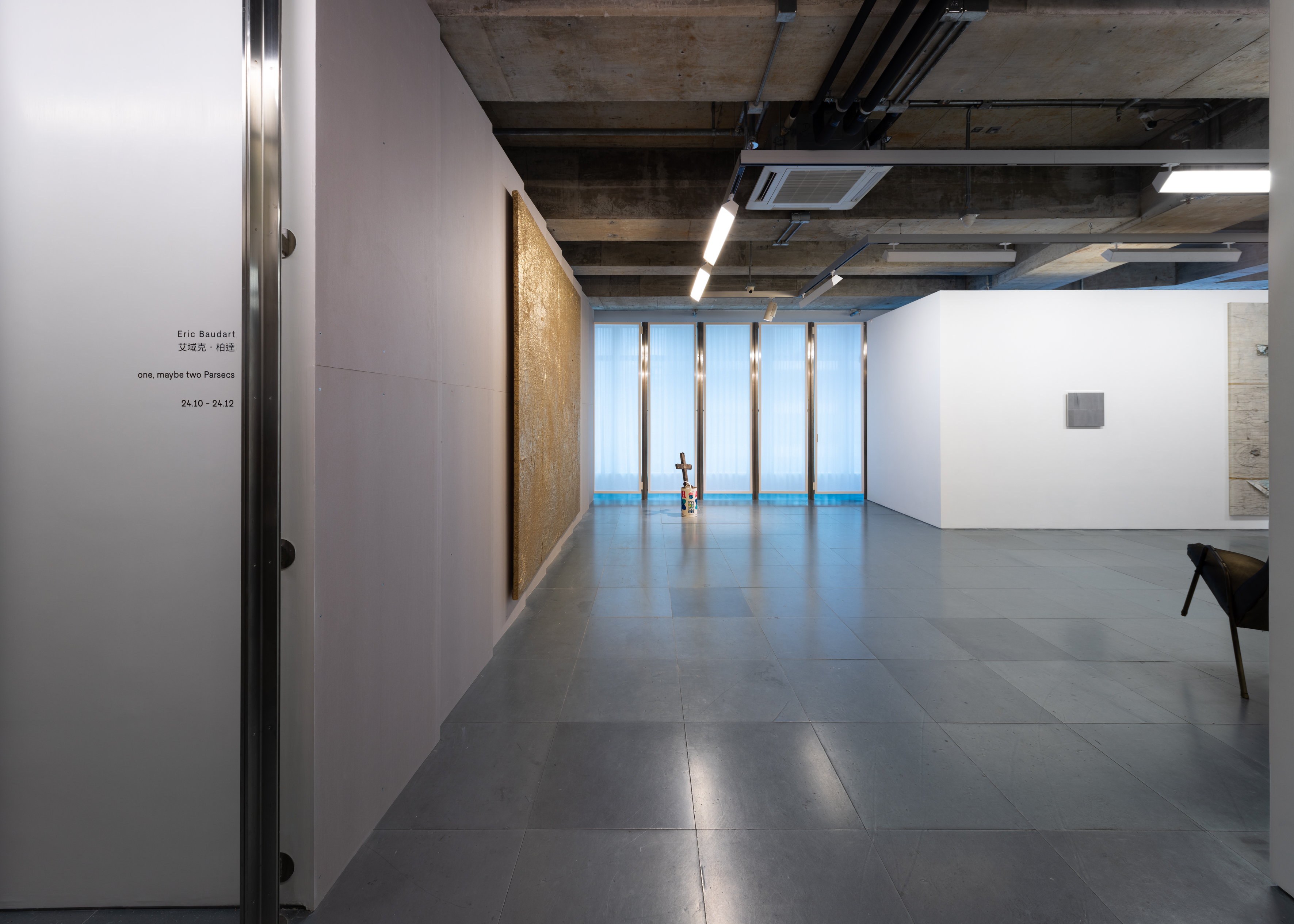