The widespread Covid-19 pandemic has a global impact on many aspects of the gallery ecosystem and has profoundly affected artists, professionals and realisations of artworks. Although the pandemic aborts a number of scheduled projects and programmes, galleries worldwide manage to come together not long after the outbreak, supporting the community, interacting and cooperating with each other. The ‘Galleries Curate’ programme was initiated as an expression of this unity, presenting a total of 21 exhibitions concurrently on the online platform and the exhibition spaces of the participating galleries from January until May 2021, in order to express the dynamic dialogue between the galleries’ individual programmes. ‘Galleries Curate: RHE’ is the first chapter of this collaboration. Signifying in Greek for that which flows, ‘RHE’ is evocative of unity and impermanence, both central concepts in Heraclitean philosophy, expressed most famously by his saying: panta rhei (everything flows). The chapter of ‘RHE’ loosely addresses the theme of water in geographical, political, economic and metaphorical terms, and reminds us that through water, we are all connected.

Responding to the overarching theme, Edouard Malingue presents the exhibition ‘Shape of Water’. As the only participating gallery based in China, Edouard Malingue aims at enriching the reading and interpretation of water from different perspectives that are equally pertinent: water has for long been a unique subject in the history of Chinese art, as both an essential artistic material, and a subject matter of cardinal importance. In classical Chinese philosophy, water is a matter that is frequently discussed and empowered. Laotzu deems the highest virtue as water, and that a most sublime sage nurtures the world without asking for reciprocations as water does. Weak and gentle, water of perseverance can penetrate hard rocks; formless and plastic, water can assume any shapes once contained and sculpted. In Confucianism, Taoism, or traditional Chinese culture and art in the broad sense, water is considered soft and humble and is often eulogised. In the era of the Socialist revolution and construction, water is treated as a natural phenomenon to be conquered. Heroically controlling water, building dams and reservoirs represent the newly established government’s grand infrastructural ambitions and a materialist ideology of man triumphing over nature. Water is also present in many modern time artworks, albeit in different forms; for propaganda purposes, water is taken as a metaphor for nature which directly confronts man, and is by extension subject to modification and reform. Responding to the two preceding attitudes in stark contrast, contemporary artists practising today have in turn produced series of artworks that are emotionally charged and are radically political in sophisticated and nuanced ways. As ancient Greek philosophy explores the dialectics of impermanence and change upon the relationship between water, time and space, Eastern philosophy is focused on the spiritual dimension of water, oscillating between de-secularisation and secularisation, worshipping or conquering the subject.

Five artists from the mainland, Hong Kong and Taiwan regions of China participate in the ‘Shape of Water’ exhibition; attentive to the geographical, political, historical and cultural backgrounds of the gallery’s locus, they present artworks that deal directly with the flowing, rolling theme of water. Chou Yu-Cheng’s ‘Water, Synchronous, Sediment, Substance, Flow, Diachrony, Color #6′ (2020) examines the gradation and sedimentation of matter after being washed for an extended period of time, such as the order of pebbles on a riverbed. Chemical, toxic industrial wastewater paints matter over as it flows. The artwork faithfully represents the ordering of environmental elements and the formation of colours as time-water goes, hinting also at the brooding negative emotions and thoughts at the time of the pandemic, to the extent of inducing collective anxiety. Lai Chih-Sheng’s ‘A Water Sculpture’ (2016) fills a semi-transparent rubber glove with clear water. This small sculptural work, executed in a makeshift fashion, reverses the interiority-exteriority relation of protection, turning prevention of infiltration into prevention of overflowing. Typical of Lai’s long-term conceptual practise, it re-imagines, re-resists, re-transcends the everyday or is being re-transcended, giving birth to an uncanny atmosphere, presenting simple yet relatable expressions by carrying out small-scale interventions, sabotaging norms in a relaxed, playful Minimalist fashion. Wang Wei’s ‘Coastline’ (2021) appropriates patterned tiles found at the Hong Kong Macau Ferry Terminal. The blue and golden tiles in the public space originally signify the passage from seawater to the beach, actively transforming the space in which visitors casually stroll. Wang Wei is particularly attentive to this species of public space rhetoric, and is keen on replicating or re-placing the specificities of a given environment, isolating and in turn presenting the mundane materials and objects, creating a multi-layered, absurd spatial imagination.

Edouard Malingue is pleased to be part of the ‘Galleries Curate’ programme and converse with international galleries, artists, and audiences. For its duration, the exhibition is available both online and at the gallery’s Tin Wan studio. The gallery looks forward to initiating and being involved in more long-distance curatorial projects across galleries to come. 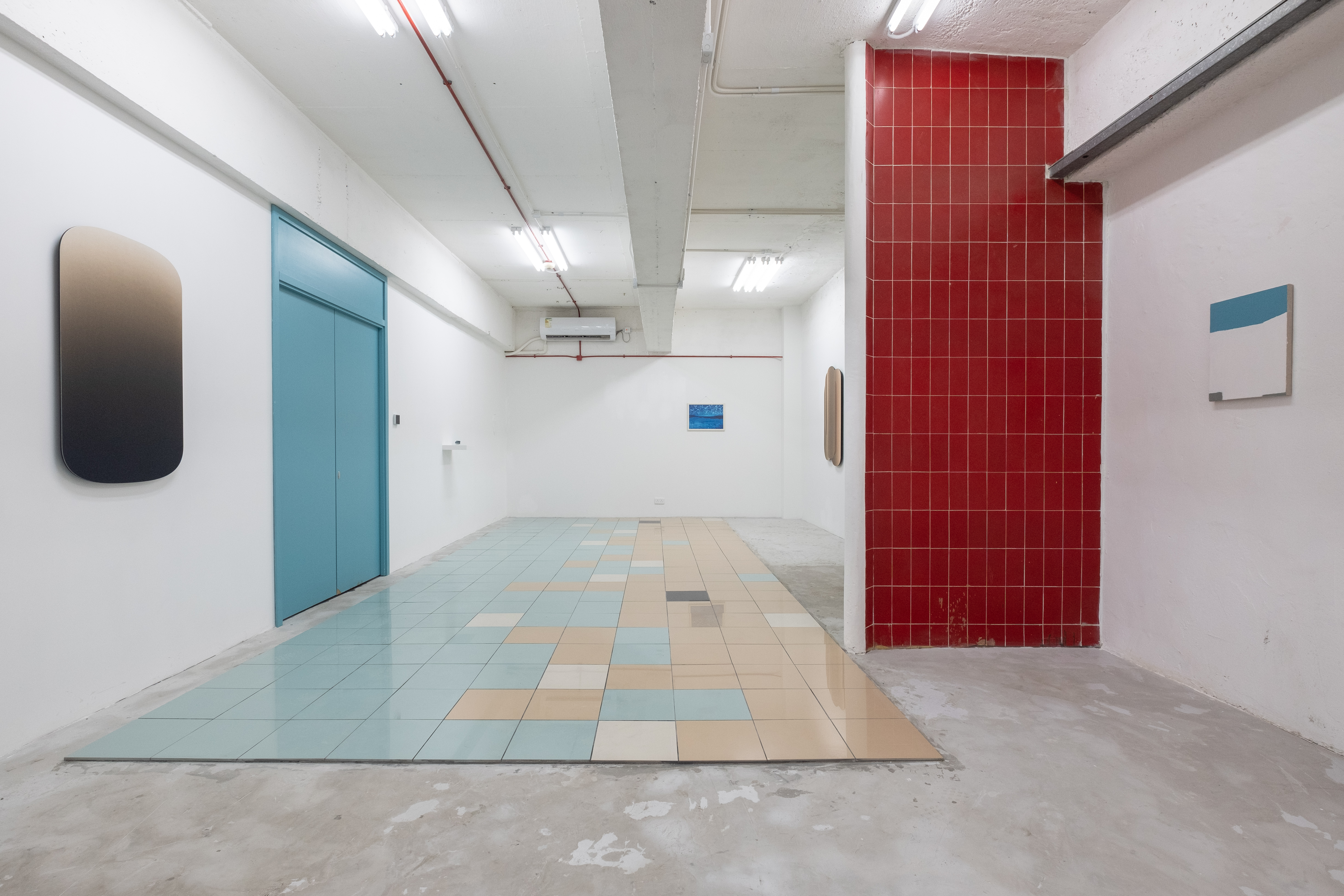