Edouard Malingue Gallery is pleased to present the first solo exhibition in Hong Kong of the Shanghai artist Liu Weijian, whose acutely observed depictions of everyday objects and moments in life add up to a strangely compelling visual language. The artist will be present at the Vernissage on Friday, 23 November 2012.

Liu Weijian was born in 1981 in Hunan Province, China. He graduated from the Shanghai Normal University College of Art in 2005 and currently lives and works in Shanghai. Typically his paintings feature simple, ordinary objects – a mailbox on the wall of a village street, rubbish bags on a grass verge, a cigarette bin and a fire extinguisher in a hotel room, a water dispenser next to a window. His subjects are the kind of things we would walk past a thousand times, never giving them a moment’s thought. But with his immaculate technical skill and painterly use of materials, Liu Weijian makes us stop and take notice.

Every summer Liu Weijian spends two months simply walking down city streets or country roads. He picks a road at random, walks along it, and paints whatever he sees along the way. He says that only thus – not choosing what to see, but just letting scenes bump into him – will he capture the most real and natural objects and occurrences. Nevertheless, of course he makes conscious choices of what to paint both outdoors and indoors and thus presents his own personal view of the era we live in.

As if to focus our attention even further, Liu Weijian bathes each object or frozen moment in sunlight or harsh artificial light, as if he is painting a still life. Also in the manner of a still life painter, Liu keeps a distance from reality and depicts his subjects in a totally objective way. There is no sign of subjectivity or emotion. Each object has its own independent presence and exists only for its own sake. His paintings do not seem to have symbolic value, nor do they hint at any narrative. Liu Weijian calls his style “anti-expressionism” and his perspective is unromantic.

The viewer, perhaps used to searching for hidden meanings, or imagining how the subject fits into a wider story, may find Liu Weijian’s work unsettling. For here we are presented by an uncompromising and unpretentious truth: these images constitute the reality of today and there are no clues; you must make of them what you will. Adding to the uncanny feeling is that the works are devoid of human beings, except The Two of Us where we see merely their shadows on the ground. It is hard to avoid thinking that Liu Weijian’s mosaic of urban life is tinged with a feeling of melancholy and alienation. 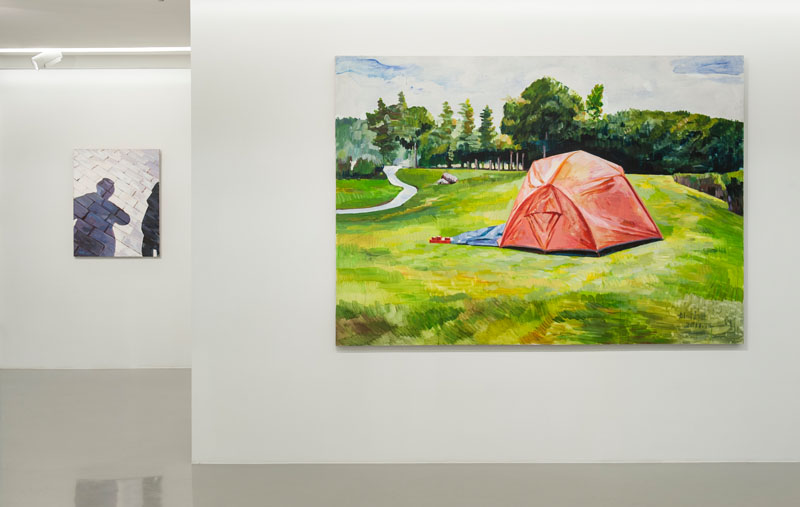