Edouard Malingue Gallery is thrilled to announce the solo exhibition of Sun Xun (b. 1980, Fuxin, China) entitled ‘Brave New World’, which will feature the exciting new animation film ‘What happened in the year of the dragon’ (2014) and an immersive installation. Created exclusively for the show and presented for the first time, the film – which carries the show’s title – will be screened alongside drawings and installations that collectively present a response to Aldous Huxley’s 1932 seminal text and considers its contemporary incarnations. A graduate from the Printmaking Department of the China Academy of Arts in Hangzhou, Sun Xun was a professor at the prestigious Academy before founding in 2006 his own Animation Studio, entitled π. His work primarily involves making images using various materials such as colour powder, woodcuts and traditional ink, and collating these to produce a film, which is often presented in an immersive setting. Sun Xun is not to be simply categorised as an animation artist, though – his art goes beyond production and acts as a theatre of memory, replete with shuttering sequences and jarring juxtapositions of surrealistic and recognisable images, which mutually serve to scrape the uncontested surface of politicised truth.

‘Brave New World’ reflects and condemns how the predicaments outlined in Huxley’s ominous text have become a reality. An illustrious writer, Brave New World was Huxley’s most enduring work in which he imagined a fictional future where free will and individuality have been sacrificed in deference to complete social stability. A work that combined the writer’s skill for satire and his deep-rooted fascination with science, Brave New World envisaged – or indeed even warned – of a dystopian world, in which a totalitarian government controlled society through the use of science and technology, one was part of an extreme consumerist society, and there was an incompatibility between happiness and truth. Huxley, whilst creating a notorious tome, effectively cautioned readers of the dangers of an all-powerful State; a premonition that, through his work, Sun Xun is stating has actually become a reality.

Consider, for example, Huxley’s vision of complicated entertainment machines: ones that would generate both harmless leisure and high levels of consumption and production, which in turn would form the basis of the World State’s stability. Sun Xun remarks and evinces in his exhibition that today these dystopian ‘ideals’ have become a reality, where rather than reading a book replete with independent thought, contemporary individuals tune in to watch meaningless TV that distracts their mind and deletes their impartial thoughts. Ironically, and as a deliberate response, Sun Xun presents a film entitled ‘What happened in the year of the dragon’ (2014). But unlike those blasé channels of entertainment pumped by production houses, it comprises a series of individual images that are questioning, reflective and, most importantly, stir independent thought. Sun Xun has thus turned on its head the 21st century tactics of information ingestion to gain our attention and, in turn, deliver us intellectually from our flat unquestioning nonchalance. The ultimate result is then not so much a film, as we have come to recognise it, but rather a manuscript – an interactive visual work of authorship.

Combined with installations as well as drawings, the gallery space will thus go beyond being a site for placid contemplation and be pivotally changed into a milieu for you to be engaged, politically or other. Sun Xun’s work purposefully stimulates us to think, and urges us to do so in a public environment; it responds to a critical need within our contemporary society to be actively and consciously present. Sun Xun achieves this, however, not by pointing to current events but rather by presenting a series of characters that seem to have existed in times past. Consider, for example, his top-hatted and straight suited magician. The locations, furthermore, seem to be of elsewhere: some mnemonic nightmarish milieu. Indeed, the scenes and sites are not attributable to places you would recognise, but rather seem to stem from some dark fictional narrative. Within this portrayal, however, lies the true wonder in Sun Xun’s works, for he is able to create a relevant fiction, one that brings you into another world, yet presents a vivid undercurrent that prompts reflection into the world you currently live in.

Overall, ‘Brave New World’ provides a challenging response, not far from a century later, to the predictions made by the literary master Aldous Huxley. Primordially, it prompts an active and engaged consideration as well as an awakening vis-à-vis what is taking place in our society and how we – as supposedly sophisticated liberated people – ‘are’. Is our existence really ours, and is our history really one that we’re making? Or are we allowing it to be simply, and ignorantly, constructed for us? 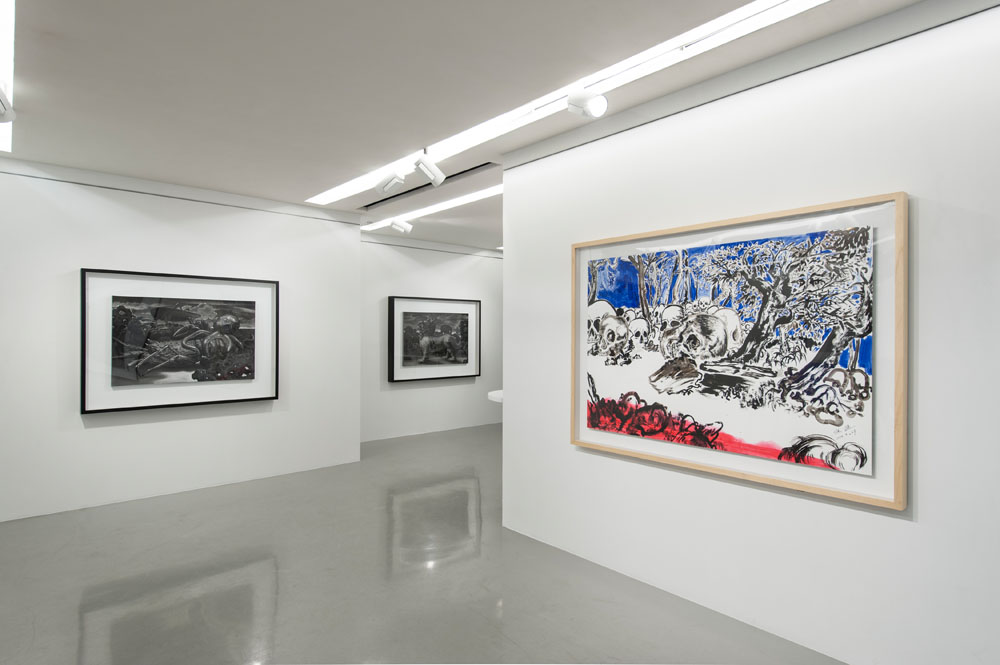