Edouard Malingue Gallery is pleased to present at The Armory Show 2013 a solo exhibition of Wang Zhibo (b. 1981), a highly talented contemporary female Chinese oil painter who lives in Hangzhou, China. The exhibition marks Wang Zhibo’s first show in New York and introduces Edouard Malingue Gallery and its dedication to exhibiting established as well as emerging artists with a multicultural perspective. A special selection of the works will be on view at the gallery space in Hong Kong prior to The Armory Show on 22-25 February.

Wang Zhibo’s solo exhibition entitled ‘Standing Wave’ features a series of thirteen new works, which capture that moment of stillness when two waves of equal but opposite forces meet (Dr. Curtis Carter, Standing Wave, 2013). This split moment is recreated by the careful depiction of external spaces, which similar to an anthropologist, Wang has observed in great detail throughout her daily life. In this series, Wang focuses on the cacophony created by renaissance-esque park fountains and new hotel lobbies being built in historical Western styles in contrastingly Chinese locations.

Through her textural painterly technique and selection of subtle tones, Wang imbues her juxtapositions of equal but opposite cultural forces with a running sense of nostalgia, beauty and darkness. Devoid of human presence, the spaces at first appear unspectacular, yet, as the viewer is drawn in by their private sphere, it emerges that each painting possesses an illogical geography. Wang’s paintings therefore blend the familiar with the imaginary, and through their intricacy, remind us to slow down and take a more minute and up-close view of China, “an external image, that may otherwise be ignored”. (Dr. Katie Hill, The Elegant Parkscapes of Wang Zhibo, 2013).

A recent graduate from the China Academy of Art Oil Painting Department, Wang Zhibo was awarded the prestigious national Luo Zhongli Scholarship in 2008 for her sensitive and evocative Garden paintings. Zhibo’s work has since received nation-wide attention and has been exhibited at various institutions across China, including the Chong Qing Art Museum, the Today Art Museum in Beijing and the Museum of Contemporary Art in Taipei. 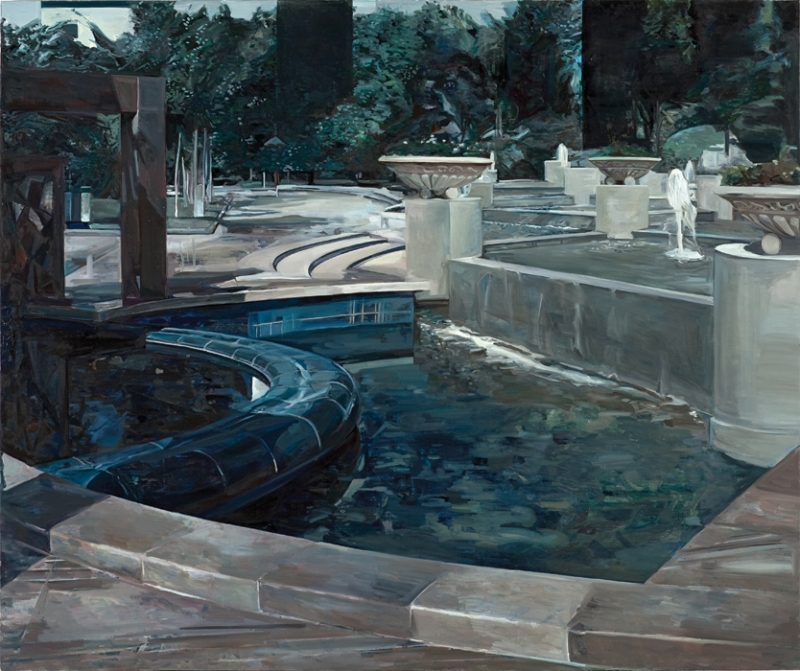