Tens of thousands of minuscule mosaic tiles, reflecting just as many tones of blue; shade nets intertwined with one another, resting upon dead branches, forming multi-layered matrixes; aged grease stains and dust, rendering window screens turbid yet thinly transparent – being obsessed with and almost paranoid about polishing such details, Yuan Yuan depicts most patiently and rationally an uncanny realm, merged in which are displaced scenes, fantasies based upon reality, personal experiences, and the singular aesthetics of immanence of the artist.

From 1992 to 2003, Yuan Yuan spent eleven years in the oil painting department at the China Academy of Art. A skilful painter, Yuan is able to delineate with great precision any specific form. He is, however, not a realist painter, and does not want to be confined to classical aesthetics.  Yuan is interested instead in exploring layers of colours with various painting knifes, and in filling gaps in a figurative composition with abstract details. Surrealist dreams expand on his canvas, interchangeably co-existing in which are the decayed and the grandiose, the complex and the orderly, the tranquil and the tumultuous, the transient and the eternal. Painting is Yuan’s only chosen form; for Yuan, art is an enclave in reality, a borderland where controversies and clashes are allowed. As soon as the artist starts working on his art, he becomes the voice of the enclave. Yuan Yuan moved to Germany in recent years and has established his permanent studio in Berlin. Just like other artists from all over the world who reside in Berlin, he is attracted by the unique, free cultural atmosphere, the specific socio-political history, and the independent, forward-thinking mentality of the city. Arriving in Berlin, Yuan looks forward to a new level of artistic creation, the starting point of which is marked by the exhibition Irregular Pearl.

It is thought that the etymological root of Baroque is Portuguese Barocco: imperfect pearls. In eighteenth century French, Baroque was defined as irregular, strange, imbalanced, dissonant, or as burdened with excessive and superfluous details. Today, ‘baroque pearls’ is a term commonly used in gemmology, regarding the pearls that are naturally irregular and non-spherical. Although the pearls are strange looking, they are considered uniquely valuable in a niche market. In 18th century, the artistic style of Baroque declined, and was considered a bad taste of extravagance. In recent times, the meaning of Baroque is still largely dismissive, more often than not related to vulgar and kitsch tastes of the nouveau riche. However, the origin of the term speaks of something else: compared with a pearl that is perfect, which stands for ideas like perfection and splendour, an irregular pearl suggests imperfection, irregularity and oddity. The two are both natural creations, born differently, so why is one necessarily better than the other? Yuan Yuan’s art is like an irregular pearl – instead of founding one’s creation upon something that is already perfect, is it not more meaningful to capture the cruel beauty in imperfection?

Frequently, Yuan Yuan’s paintings depict claustrophobic spaces; the places are seemingly lively, but human figures are definitely absent. As soon as the spaces are abandoned, they are turned from private territories into public spaces. Yuan compares this transformation with the fate of an artwork: as soon as it is gazed upon by a spectator, the artist abandons his exclusive possession of it. The viewer gradually identifies the time and space depicted in the painting, and in the same process identifies his or her own perspective, arriving not only in a painted world, but also his or her own projection. Expressing the absence of human by depicting the traces left behind, Yuan’s painting takes exactly the excess of details as its subject, emphasising on even the most trivial details. In a space that is ruined and fractured, time is surprisingly rendered clear and visible, amplifying vivid spiritual and emotional echoes.

In many of his paintings, Yuan Yuan depicts the same elements repeatedly: row upon row of the same object, is Yuan’s way to present all the details that are considered equally significant. By doing so, the artist’s aim is to know and comprehend all the facets and spheres of what is present in perspective. It is like sorting out a room, which has less to do with physically categorising and sorting things, than with positioning one’s self on the level of perception. In an interview, Yuan talked about the amount of time he spends daily on cleaning the studio; if there is one painting tool that is not in its place, it is not possible for him to start working. The methodological habit shapes his work, not by presenting a kind of ground-breaking form, but by arriving at a perfect balance between the subjective and the objective, through examinations and sort-outs. 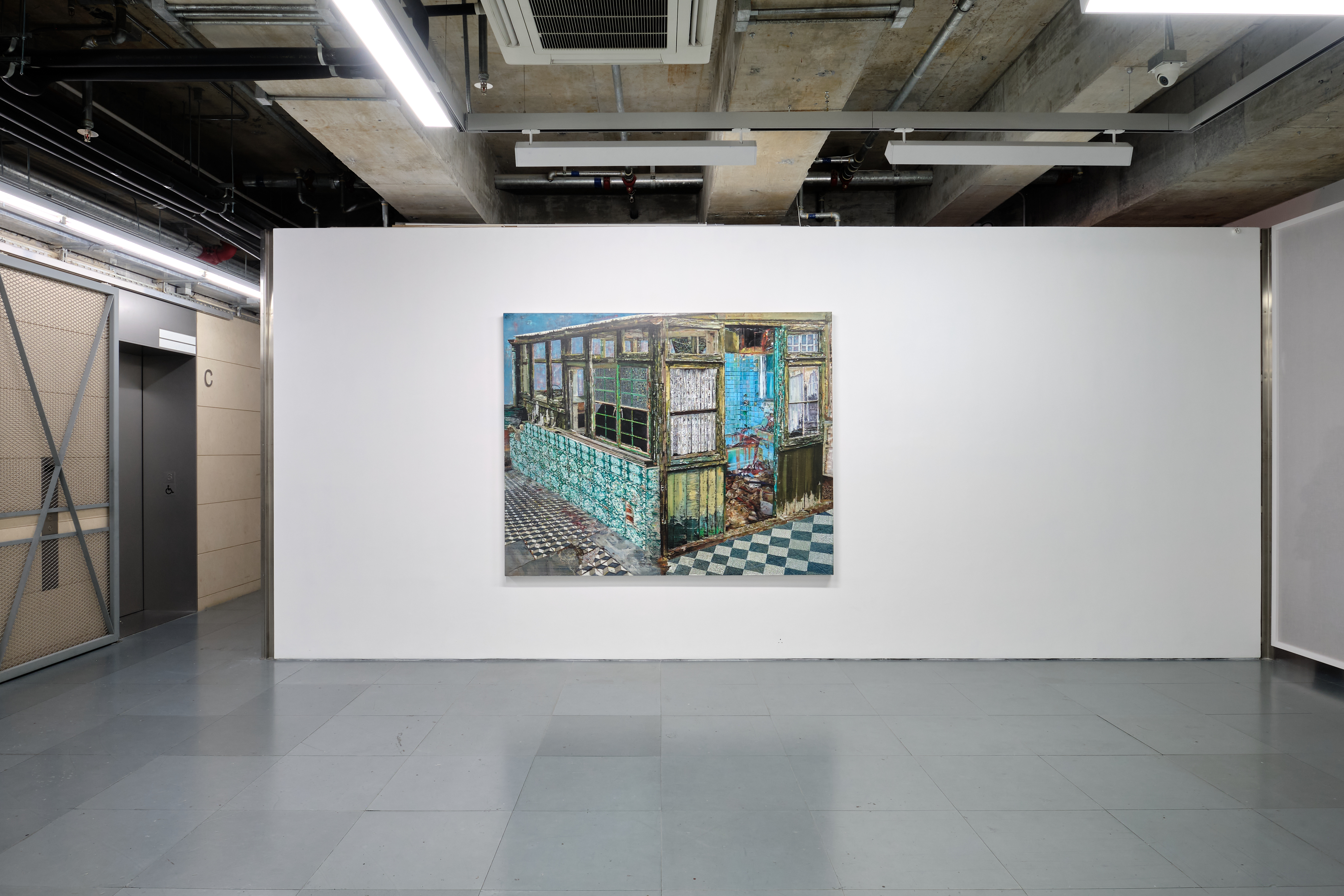