Edouard Malingue Gallery is pleased to present at FIAC a booth featuring Su-Mei Tse (b. 1973, Luxembourg), Chou Yu-Cheng (b. 1976, Taiwan) and Zheng Zhou (b. 1969, China). The works reflect the gallery’s programme that focuses on artists who combine aesthetic appeal with conceptual enquiry.

A trained classical cellist of Chinese and British descent, Su-Mei Tse weaves a meditative, visaural tale empowering the language of music as a primary voice. Investigating associations between places, geographies, cultures, traditions, Tse’s work elicits a cross-stimulation of the senses, where time and its flow are suspended in a gentle state of contemplation. On display is the diptych ‘Sky’ that depicts a set of cloud images, captured, for a single moment, as if freezing a wrinkle in time. In tandem, she will present ‘Stone II #1’ (2018), which raised on a plinth, has one think of scholar’s rocks and when juxtaposed with ‘Sky’ creates an environment reminiscent of Shan Shui paintings in three dimensions, a traditional style of Chinese painting that depicts sceneries or natural landscapes. Tse rose to prominence when representing Luxembourg at the Venice Biennial and being awarded the Lion D’Or award. She has equally held solo shows at Aargauer Kunsthaus, Aarau; Mudam Luxembourg, Luxembourg; Isabella Stewart Gardner Museum, Boston, amongst others.

Modified, shifted or transferred elements amounting to new relationships between status and object: herein lies the pulse of Chou Yu-Cheng’s practice that builds, across multiple mediums, a subtle critique of mass media, institutions and the mechanisms that produce them. A graduate from l’Ecole Nationale Supérieure des Beaux-Arts de Paris, and the research programme La Seine, Chou has gained international recognition for his dialectical interplay between the source and results of his creations. On display is a new wall-spanning work based on his recent series addressing modernisation and cognitive faculties. “Refresh, Sacrifice, New Hygiene, Infection, Clean, Robot, Air, Housekeeping, www.ayibang.com, Cigarette, Dyson, Modern People” (2017-18) addresses this multifaceted topic through the lense of ‘hygiene’ reflecting the Taiwanese slang phrase “without knowledge and without hygiene” that refers to someone dumb, dirty, without standards. Relative to knowledge, hygiene is relatively abstract – yet, it possesses a yardstick by which we gauge modernisation. Recent solo shows include Taipei Fine Art Museum, Taipei; Kaohsiung Fine Art Museum, Kaohsiung, amongst others. Group exhibitions include Liverpool Biennial; Art Basel Hong Kong Encounters; New Museum, New York and others.

Zheng Zhou is a painter of instinct, conveying onto canvas observations from the world, as ad hoc as they may be. His strokes, furtive yet decisive, depict an urgency – to grasp, to depict, to capture that mesmeric multitude of the cosmos, the ‘phenomena’ we, or more precisely he, is a witness to. Referencing ‘I Ching’ (“The Book of Changes”), Zheng channels the astronomical, remarking the myriad of components that make up our universe, mimicking its duplicity through his subject range, hues and techniques. Figures, crowds, animals, objects – elements of the quotidian are the protagonists of Zheng’s vision, except none are depicted quite as is. On display are two works, “Endless Idleness” (2016) and “Eye of Sky” (2016). In each, animals and people hover behind a glistening trickle of abstract paint, superimposed to create a delicate fumble of anthropomorphic shapes with a mnemonic quality. A prolific painter, Zheng debuted by studying Printmaking at the Zhejiang Academy of Fine Arts, subsequently shifting his practice to painting and lecturing.Throughout these years of tuition and pedagogy, Zheng painted, systematically, before finally relocating to Beijing in 2013 to work as an artist. He recently exhibited at Edouard Malingue Gallery, Shanghai and Hong Kong. 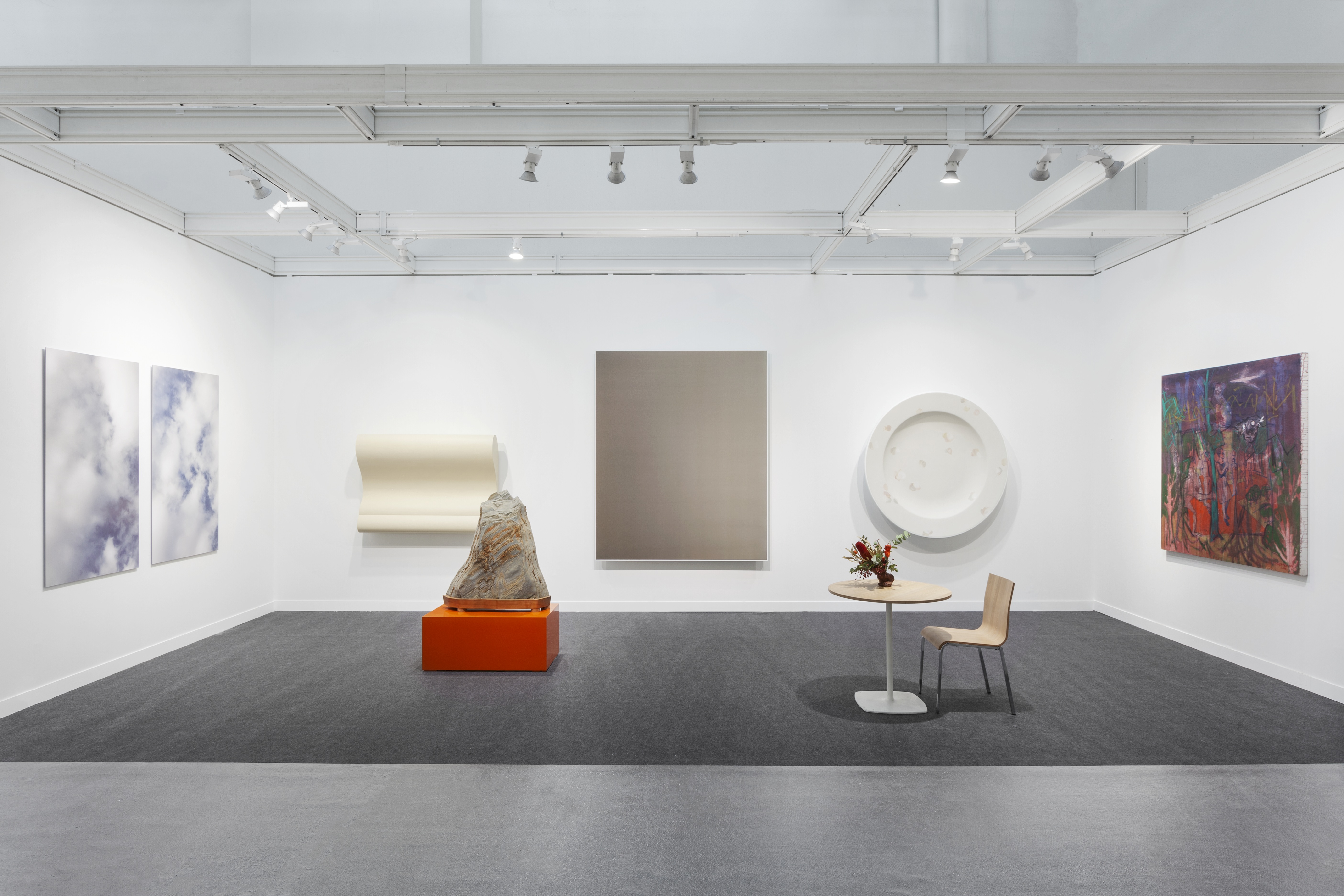