Weight, gravity, pushes and pulls – such interactions are at the heart of Edouard Malingue Gallery’s (Hong Kong/Shanghai) booth at Frieze London, which presents a theatre of objects by Shanghainese artist He Yida (b. 1980, China). Displaying a new body of work, each sculpture introduces her diverse language while reflecting her inspiration from discarded objects. By means of mimicking, He Yida reconstructs elements to create a subtle spectacle: concave and convex, presence and absence, presentation and representation – a search for the balance between objects.

He Yida mounts delicate sculptural compositions that challenge the aesthetics of everyday life, the relationships between objects and more broadly probe at the origins of art and its deference to monumentality. Born and living in Shanghai following studies in Fine Art at Chelsea College of Arts in London, He Yida’s approach to the readymade is one of integration rooted in material. She identifies curvatures, textures, weights, and through a process of selection adopts the existing whilst assembling it as part of a new whole. As such, He Yida creates her own language of sculpture: one that acknowledges the utilitarian purpose of the original but uses it as a springboard to build a palpable yet ambitious multi-dexterous theatre of objects originating from the streets.

In the centre of the booth are a set of floor-based sculptures. ‘Urban waste imitation 1’ (2019), for example, mimics a pile of stacked timber crate frames, loosely placed on top of each other. Composed of Oriented Strand Board timber battens, the work evokes the feeling of squeezing. Placed one on top of the other, there is a natural gap, a gap that using truck tarps and straps, is condensed. This sense of forced proximity extends to ‘Urban waste imitation 2’ (2019) that is equally a remake of a real crate that was found. From the main structure to the accessories, this work mainly consists of what is considered packaging. Placed on a rug, the uneven bottom of the crate sits around the corners, the gaps becoming evident through the pressed marks on the carpet. Contrasting with the patterns on the surface, there is a sense of coexistence between the decorative shapes and the forced marks.

A further work, weighing on the floor, is ‘Urban waste imitation 3’ (2019), which consists of various door panels, door frames and accessories that have been arranged and balanced. The latter is at the heart of this work and He Yida’s practice more widely: finding balance through physical forces. The staggered ceramic door handles vary in length and strength. Some serve as brackets between the door panels and others are strung into other structures. These sheet or block-like structures act as outlines of cross-sections of plasterline moulds. Crucially, when these small pieces are stuck on stainless steel pipes they are objects as well as connectors. This sculptural language becomes a primer that links all the clues and combines these objects, structures, outlines and missing parts into a small assemblage of objects.

Surrounding the booth are several wall-based works. ‘There was a light coming through shining on the imaginary city 2’’ (2019) follows He Yida’s interest in delicate but sharp metal. Based on the silhouettes of architecture models for children, she uses silver paint to “print” shapes and structures of the main components and leftover panels on the blinds. The simple outlines of trees, as well as shapes of house façades and their frames, are divided into layers by the blinds. The chrome paint looks like dust from certain angles and sometimes as if its shadow is cast by sunlight.  A few sponges with peculiar shapes are stuck in the middle and the images seem to be wiped by those sponges. Part of the blinds appear to collapse as if they are carrying some weight.

On an adjacent wall are a new series of silkscreen prints, ‘Fossil – shrink 1 & 2’ and ‘Fossil stretches’ (2019), produced by painting on creased paper surfaces and then making them into silk screen prints. The patterns are the remaining frames from an industrial laser cutter. He Yida taped the shorter pieces of paper together to create enough length for the longer pieces so there are some visible tiny gaps unpainted on each paper edge. He Yida’s interest in silk screen printing is related to the pressure of that scraping force needed during the process of screen printing. As such, production methods and expression are combined in this work: the vertical structure of silk screen printing’s edge, the sandpaper-like colour, folds, as well as the gap between papers displayed on the longer silk screen printings. Pressed in an acrylic frame, there is the opportunity for front and back display. When they are mounted on acrylic frame, the frame is made with 3cm edge 90 degree standing up on the side, so it will look like the whole frame is pressed into the wall by force, and also when we hang the shorter ones (with wrinkle) behind the long prints, it will look like the shorter prints is about to push the long print forward with the tense of  those wrinkle

Through this exploration of relationships and assignations of value, He Yida ultimately mounts a considered, calm and confident defiance of venerated monumentality. Observing artistic, societal and social celebrations of the magnanimous, He Yida departs from the common rhetoric, exploring the overlapping fields between elite and plebeian, shying away from the purported high-end and macroscopic narratives. 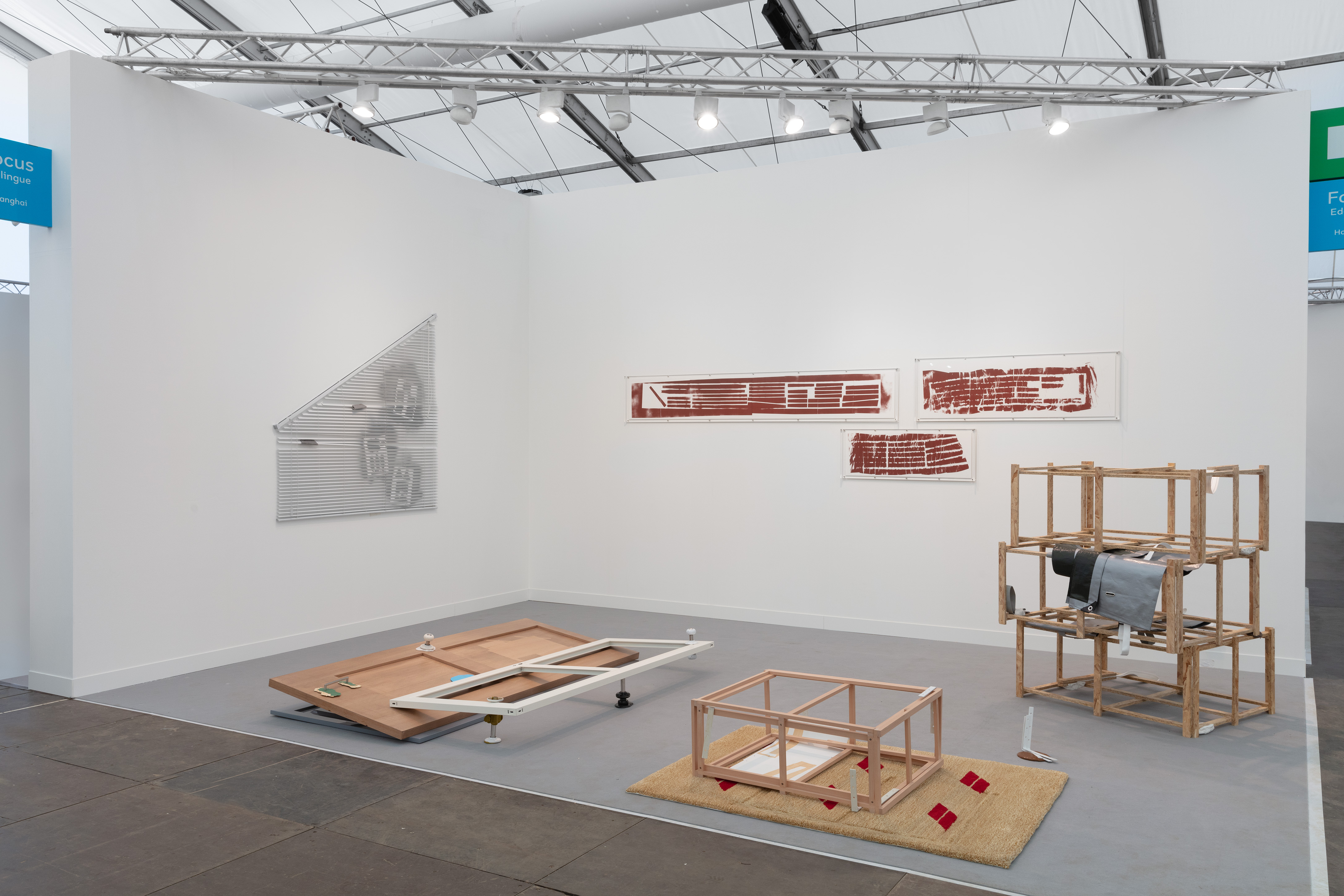