Edouard Malingue Gallery is pleased to present recent paintings by Brook Hsu at Frieze London 2021. Hsu (b. 1987, USA) grew up in Oklahoma, currently lives and works in New York. Her work is known for interweaving the fantastical, the mythopoetic and the autobiographical, embedding rich and diverse references from histories, modern literature and films. Working across painting, drawing, sculpture, writing and rug making, the artist creates a distinct species of apparitional imagery through an array of mediums. Her attentiveness to loss in life allows her art to occupy a singular transitional space that is acutely contemporary in nature, reconstructing personal experiences and fanciful myths, recounting stories of love and melancholy.

The solo presentation includes Hsu’s latest portraits series, depicting moments and characters from films by Stanley Kwan, Takeshi Kitano, and Wong Kar-wai among others. ‘Maggie’ (2021) and ‘Ruan’ (2021) are portraits of Maggie Cheung playing both herself and Ruan Lingyu in the 1991 film ‘Center Stage’ directed by Stanley Kwan. Hsu is interested in recent years to explore the human form, and the actors in character — ‘surrogates in pure form’ — provide an unusually open form for her to work with. Closely observing them in movies, Hsu takes screenshots of the moments which express this exceptional openness, and then makes carefully rendered drawings from these screenshots, before producing large-scale portraits. The pair of ‘Maggie’ and ‘Ruan’ could be considered examples par excellence from the portrait series, as Maggie Cheung in the pseudo-documentary oscillates beautifully between being the silent-film star from the 1930s, and herself in an uncanny fashion.

Hsu repeatedly examines and feels the painting subjects in her practice. Basing ‘La Froggy Victime’ (2020) upon Balthus’ painting ‘La Victime’, the artist ruptures and warps the composition to produce dichotomised tensions. The painting’s astoundingly simple and monochrome surface brings about a hauntingly emotional charge, knifing in one and the same gesture the victim and the diptych-ed painting itself.

The obvious manifestation of mythological symbols is provisionally dissolved in Hsu’s ongoing series of small-scale oil paintings ‘Tree in a landscape’. The landscape in these paintings is too ambiguous to decide the specificity of the locus; the only subject that is clearly delineated is the tree that stands out in an abrupt yet silent way. A Bataillean discontinuous being, the evergreen, ever-centred tree is radically (de-)contextualised by being placed in environments that are at times luscious, luring and threatening.

Another oil painting on wood of a smaller size is ‘Two Skeletons’ (2021), which brings the viewers back to the world Hsu often paints: a world that is populated with spectres, ghosts, satyrs and creatures from other worlds. Caught in a permanent, intimate relationship, the two skeletons also demonstrate Hsu’s interest in revisiting the specific painting genre of vanitas, and re-introducing the language of it into post-human discourses. Turning away provisionally yet resolutely from Hsu’s favourite shades of green, the moderately sized work speaks of world-making endeavours that are humorous, deadly and life-affirming. 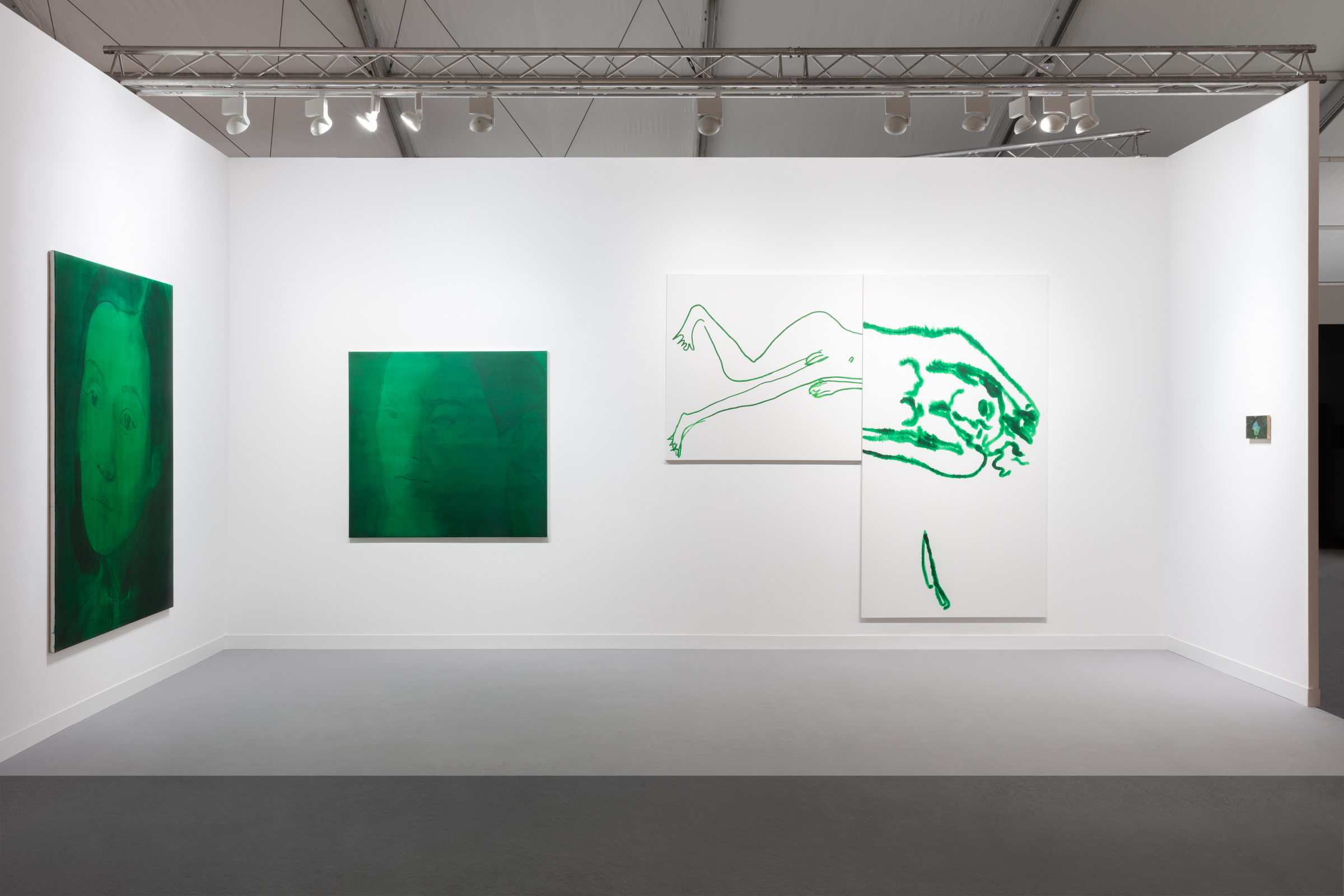