Edouard Malingue Gallery is pleased to present at Hong Kong Spotlight 2020, a solo presentation with works created by Su-Mei Tse (b. 1973, Luxembourg).

A trained classical cellist, Su-Mei Tse weaves a meditative tale through her work. Empowered by the language of music, Tse’s practice spans mediums of video, installation and sculpture. Investigating associations between places, cultures and traditions, Tse’s delicate work elicits a cross-stimulation of the senses, where time and its flow are suspended in a gentle state of contemplation. Examples of her work include a chamber where the sole reverberating sound is your own breath, and cellos played against an accentuated mountainous green backdrop.

In the film “Shaping” (2019), which is accompanied by audio based on different soundscapes, an ongoing act of undulating clay endlessly being shaped by hand and then dissolving is presented. More than shaping a useful vessel or moving towards a final result, the work represents the idea of shaping the world and shaping a life through ceaseless movements. The beginning overlaps with the end and vice versa, constituting the cyclic character of being. The undulating choreography appears akin to breathing or fluctuation, instilling a sense of living into the act. Together, image and sound fluctuate between presence and absence creating a suspension and a space for potentialities.

In the series of works entitled, “Home (Cube Studies)” (2019), Su-Mei Tse presents photographic examinations developed in the spirit of three-dimensional drawings. Playing with the basic shape of the classic line drawing of a house, these are variations on distortions of a cube. Thin and simple threads gather the frail sticks of each cube and moments of fragile instability become translated into geometric forms of delicate beauty. The sculptural and spatial approach of these “mental drawings,” as well as the rhythmic variations they create comment on the fragility of the inner state of mind.

“Studio 8 (Rome) #1” (2015) and “Studio 8 (Rome) #2” (2015) are part of a series in which Su-Mei Tse manifests into two inkjet print photographs, a contemplation of time that has passed. The image of “Studio 8 (Rome) #1” is a photograph of the reflective surface atop “Faded,“ a series of sculptures that are manipulated mirrors realized by the artist in 2014-15. The reflection captured in this work is of Tse’s atelier during her residency at the Villa Medici in Rome, which was also the atelier of Jean-August- Dominique Ingres during the early 19th century. By photographing this atelier through a faded and mirrored surface, Tse emphasizes and explores the meaning of temporal space that is evanescent, absent, and capable of bearing possible residual aura.

In the work “Nested #1” (2016), Tse has embedded stone balls of different sizes and colors in the niches of limestone formations, representing the delicate balance between holding and being held, and also suggesting associations with the kind of marbles that children play with, or planets orbiting in the cosmos. “Nested” echoes the ancient Chinese tradition of “scholars’ rocks” (gongshi), unusual stones, objects of contemplation and inspiration the literati placed on their work desks. As reflections of the veneration of nature and the links that connect microcosm and macrocosm in Chinese thought, these stones embodied mountains, landscapes, “bones of the earth”, “roots of clouds” or parts of the celestial vault. By placing mineral spheres of different sizes and colours in cavities in calcareous stones with tortured shapes, Tse appropriates this play on scale in a playful and poetic way: the spheres evoke both a child’ s marbles and the cosmic universe. It is also a matter of letting oneself be led by the found shape, emphasising its singularity by nesting other forms. 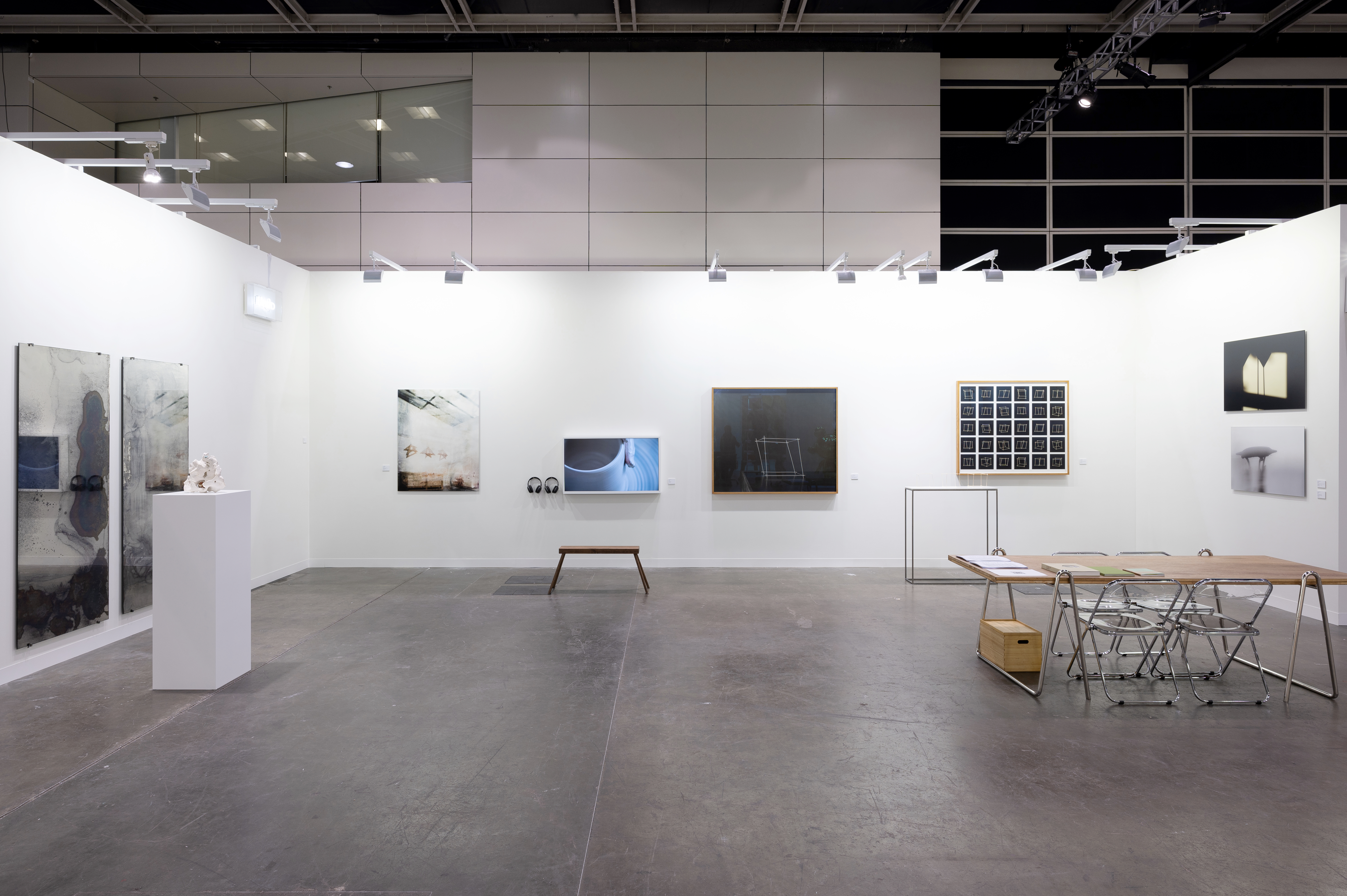