Eric Baudart appropriates, transforms and alters readymades as well as decontextualises quotidian objects to mount a ballet of shape, colour and form. On display is Light Trap. Baudart has been widely exhibited internationally with group exhibitions at the MAMCO, Geneva; Le Petit Palais, Paris; La Centrale for Contemporary Art, Brussels; Bass Museum of Art, Miami, as well as solo exhibitions at Centre d’art contemporain Les Tanneries, the Fondation d’entreprise Ricard and La Maison Rouge, Paris, among other locations. In 2011 he was the recipient of the Meurice Prize for contemporary art. Baudart’s work is held in various notable museum collections, including the MFA, Boston and the MAMCO, Geneva.

Jeremy Everett creates works that exist as the fragment of a sentence. With an initial degree in Landscape Architecture, Everett traversed into the art of making. Citing inspirations such as Land Art masters Robert Smithson and Michael Heizer, Everett’s work stems from a centre of intuition and subtly evolves beyond process and creation; neither never fully created nor complete, its significance is in its evolving state between varying forms of beauty. On display is Burn Out. Everett has held solo exhibitions in Los Angeles, New York, Shanghai, Paris and Hong Kong, amongst other locations. Group exhibitions include Espacio Tenerife de las Artes and the Museum of Contemporary Art, Chicago. Everett’s practice has been extensively featured in publications and critical reviews including Phaidon, l’Officiel de l’Art, The New York Times, Modern Painters and ArtReview, amongst others.

Su-Mei Tse weaves a meditative tale through her work. Empowered by the language of music, Tse’s practice spans mediums of video, installation and sculpture. Investigating associations between places, cultures and traditions, Tse’s delicate work elicits a cross-stimulation of the senses, where time and its flow are suspended in a gentle state of contemplation. On display are Nested #4&5, Studio 8 (Rome) #1&2 and Stone Collection II #8. Tse is an internationally-celebrated artist who rose to prominence in 2003 when she represented Luxembourg at the Venice Biennale and was awarded the prestigious Leono d’Oro award for her tripartite installation ‘Air Conditioned’. Tse’s work has since been exhibited nationally and internationally including solo shows at Aargauer Kunsthaus, Aarau (2018); Mudam Luxembourg, Luxembourg (2017); Joan Miró Foundation, Barcelona (2011); Isabella Stewart Gardner Museum, Boston (2009). Her solo show “Nested“ was held in Luxembourg, Berlin, Rome, Shanghai and Taipei. Group exhibitions include Kunstmuseum Bonn, Germany (2009); National Gallery of Art, Poland (2009); Singapore Biennale (2008); Kunsthaus Zurich (2006); De Appel, Amsterdam (2005); Sao Paulo Biennale (2004). Wang Wei is a multidisciplinary installation artist who looks at how the navigation of physical spaces can inform us about our own lived reality. Through modifying existing architectural structures with subtle, surprising additions or appropriating stylized features from disparate sources, Wang Wei has developed a strong practice around interventions that are aim to disrupt human perceptions of space while opening a dialogue about construction, labor and ways of seeing. On display is Squared Natural History 4 (No.9), replicating the décor from exterior walls of various buildings in Guangdong’s Dongguan area. Using various forms of borrowing and replication, these “cheap aesthetics” are extracted from their original contexts, rendering them odd, awkward, isolated and self-contained. Wang Wei’s work has been exhibited in series of important exhibitions including: Thailand Biennale, The Second Yinchuan Biennale, 2017 California-Pacific Triennial, Pavilion of China at 12th International Architecture Exhibition-La Biennale di Venazia and others. Wang Wei’s work ‘Shadow’ (2017) was selected as the best oeuvre standing as part of the special exhibition programme ArtReview Asia Xiàn Chang at West Bund Art & Design 2017, Shanghai.

Tropical sceneries finely coated by a delicate layer of dewy snow; glass cabinets housing an array of anthropological items; the blurred vision of a seated mother and child; each are running explorations in Wang Zhibo’s practice that surveys the absurd spectrum of what is real – geographically, historically, ethnographically, architecturally. A graduate from the China Academy of Art’s Oil Painting Department, Wang’s paintings confound our notions of time and space, transcending traditionalism through her curious and challenging subject matter. On display is Sitting (Saint 1). A highly regarded Chinese painter, Wang was awarded the prestigious Luo Zhongli Scholarship in 2009. Her work has since been exhibited worldwide including exhibitions at Times Art Centre Berlin; Times Museum, Guangzhou; Penrith Regional Gallery, Sydney; Chongqing Art Museum; Today Art Museum, Beijing; and Museum of Contemporary Art, Taipei among others. Furthermore, Luise Guest selected Wang to feature in her publication on female Chinese artists ‘Half the Sky’ (2015).

Multicultural paradigms, weaved into a symphony of image and sound, are at the heart of Hong Kong artist and composer, Samson Young’s practice. With a formal cross-cultural training in music composition, Young channels creates innovative cross-media experiences that touch upon the recurring topics of identity, war and literature. On display is a 3D print artwork Support Structure #17. Young has had solo exhibitions at SMART Museum of Art, Talbot Rice Gallery, the Kunsthalle Düsseldorf, Centre for Contemporary Chinese Art in Manchester, M+ Pavilion in Hong Kong, and Hiroshima City Museum of Contemporary Art, among others. In 2017, he represented Hong Kong in a solo project at the Hong Kong Pavilion of the 57th Venice Biennale. In 2019, he is shortlisted for the inaugural Sigg Prize. Group exhibitions include Performa 19 Biennial, New York; Solomon R. Guggenheim Museum, New York; Biennale of Sydney; National Museum of Art, Osaka; National Museum of Modern and Contemporary Art, Seoul.

Yu Ji’s current practice is motivated by the ongoing investigation into the specific location with geography and historical narratives. Her works have been associated closely with field researches, and shows a strong interest in the intervention of specific space with the body. Taking materiality of the media she employs as the starting point and sculpture as her essential media, Yu Ji has been developing and enriching her own vocabulary of art. Her performances that happen together with exhibitions of her sculptures, reflecting and moderating the fragile presence of human and objects in its everyday environment, often turn the space of art into the site of labor work. On display are Flesh in Stone – Component 2# and Ta Jama No.1. Yu Ji’s work has been exhibited at Various art institutions including Palais des Tokyo in France, CAFA Museum in Beijing, Yuz Museum Shanghai, and Times Museum Guangzhou. Yu’s selected exhibitions include: May You Live In Interesting times, 58th International Art Exhibition of La Biennale di Venezia 2019; SOON ENOUGH: ART IN ACTION, Tensta Konsthall, Stockholm (2018); HOGO BOSS ASIA ART: Award for Emerging Asian Artists, Rockbund Art Museum, Shanghai (2017); Why Not Ask

Again?-Maneuvers, Disputation & Stories, 11th Shanghai Biennale; and The Eighth Climate (What Does Art Do?), 11th Gwangju Biennale (all 2016).

Zheng Zhou is a painter of instinct, conveying onto canvas observations from the world, as ad hoc as they may be. His strokes, furtive yet decisive, depict an urgency – to grasp, to depict, to capture that mesmeric multitude of the cosmos, the ‘phenomena’ we, or more precisely he, is a witness to. On display are his most recent works, Cool summer and The rabbit’s blessing. Zheng Zhou has been exhibited internationally, from Beijing to Hong Kong, Paris and Shanghai. Zhen Zhou’s work has been exhibited in Hong Kong and Shanghai. He also had solo exhibition in CHAO Art Center. 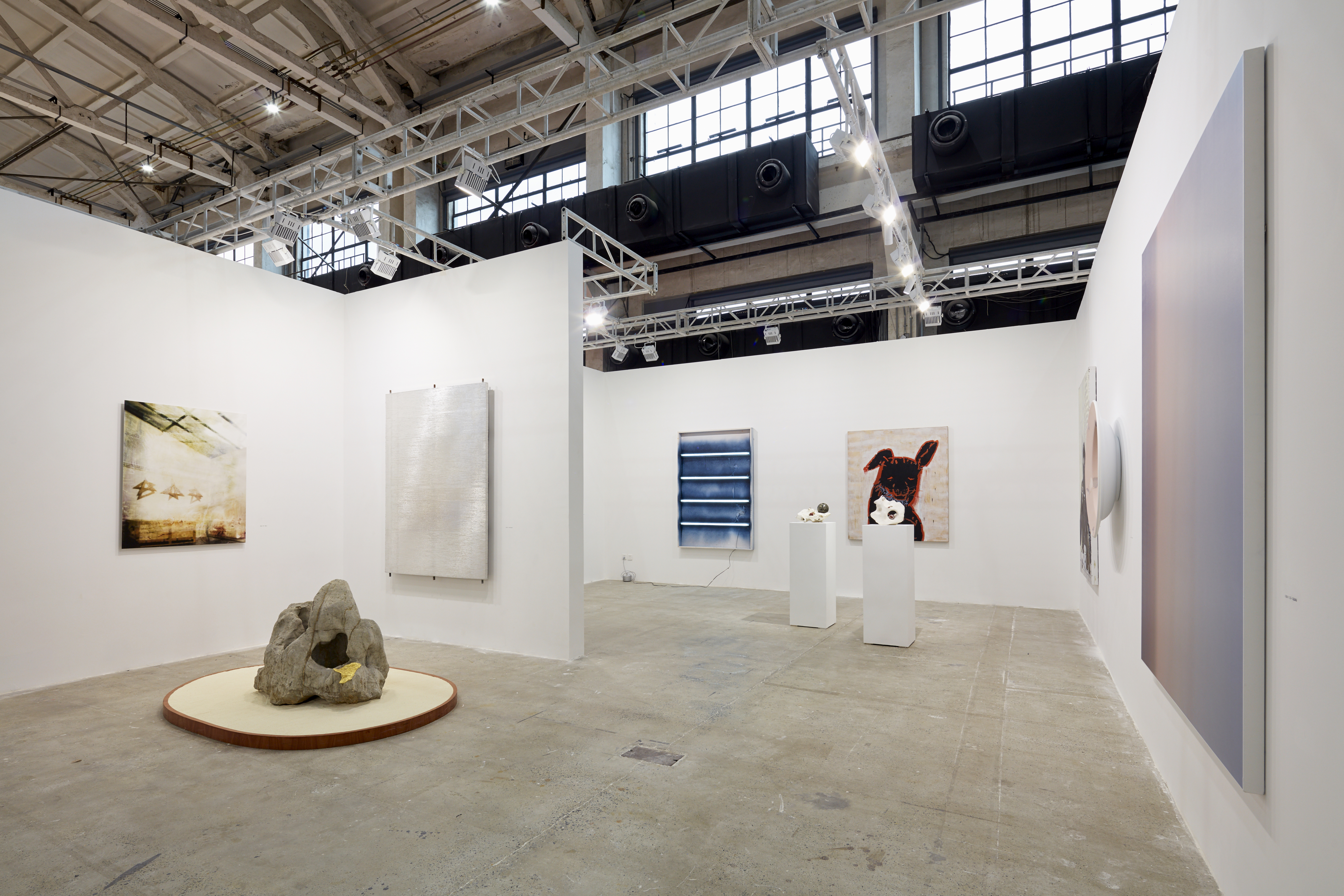