Edouard Malingue Gallery is delighted to announce its participation at Art Basel Miami Beach 2016, presenting Wong Ping in the Nova Sector, Eric Baudart in the Public Sector, Tromarama and Samson Young in the Film Sector as well as João Vasco Paiva in the Film Sector Library. Additionally, Sun Xun has been selected for the 2016 Audemars Piguet Art Commission.

Hong Kong artist Wong Ping has been selected to present his animation film ‘Jungle of Desire’ (2015) in the Nova Sector. The short film tells the story of an impotent husband, unsatisfied wife and a megalomaniac policeman, illustrating the perfect ecosystem of the concrete jungle, where these characters are able to truly face their lust with no moral laws. Flashing, pop-like imagery; visual and auditory narrations that explicitly touch upon sex, politics and social relations; vibrant sculptures that extend into three dimensions the artist’s fantastical animation world – these are but cornerstones of Wong Ping’s practice that combines the crass and the colourful to mount a discourse around repressed sexuality, personal sentiments and political limitations. Wong Ping is one of Hong Kong’s most exciting emerging artists, whose animations have been commissioned by NOWNESS, Prada and M+, and have since been added to the museum’s permanent collection. He recently received one of Perspective’s ’40 under 40’ awards for his work.

Eric Baudart is presenting ‘Atmosphère’ (2016) in the Public Sector at Collins Park. An evolution from his running series bearing the same title in which he places various types of operating ventilators in a clear aquarium filled with yellow canola oil, ‘Atmosphère’ (2016) takes on a larger than life form so that the viewer’s interaction with the artwork is shifted from one of peering to that of being physically absorbed. Absurd, humorous and mildly perturbing, the apparatus operates, moving in a cyclical motion against the thick substance, creating slow, citrine ripples. The sculpture series takes inspiration from a conversation between Marcel Duchamp, Fernand Léger and Constantin Brancusi, when Duchamp, hinting to the perfection of natural simplicity, announced ‘Painting is dead. Who could make something better than this propeller? Could you?’ Living and working in Paris, Eric Baudart has been exhibited internationally at La Centrale for Contemporary Art, Brussels and the Bass Museum of Art, Miami among other locations. His work is held in several permanent collections including the MAMCO, Geneva and the Museum of Fine Arts, Boston. In 2011 he was the recipient of the Meurice Prize for contemporary art.

Tromarama, Samson Young and João Vasco Paiva have been selected for the Film Sector. Tromarama are presenting two stop motion films. Firstly, ‘Serigala Militia’ (2006), created using 450 woodcut plywood boards, with a backdrop of Seringai’s thrash metal lyrics, which playfully addresses social issues in Bandung. Secondly, ‘Psylocibin’ (2010), created using 120 acrylic on wood boards and juxtaposed with music by Abi Raditya, which presents a bow tie wearing cartoon-like bear dancing to synth-electro 80s beats. Humorous and engaging, Tromarama present a critique of video art as a medium in itself rather than simply a filmic accompaniment to a musical track. Tromarama have been exhibited around the world including the Liverpool Biennial Fringe, Gwangju Biennale and National Gallery of Victoria, Melbourne. Additionally, Samson Young is presenting his short film ‘The Coffee Cantata (Institute of Fictional Ethnomusicology)’ (2015), a fictional adaptation of J.S. Bach’s ‘Coffee Cantata’. Originally presented through songs, videos, and stage design, the artist tells the story of a caravan cafe owner’s life. In the video, jazz vocalist Michael Schiefel improvises a set of songs inspired by the cantata in the Rio Del Oro Valley, New Mexico. Samson Young is a leading artist, selected to represent Hong Kong at the 57th Venice Biennale, 2017. He has held multiple exhibitions worldwide, including 4A Centre for Contemporary Asian Art, Sydney; Center of Contemporary Art, Seattle; and the Asia Triennial, Manchester. Upcoming exhibitions include a major solo show at Kunsthalle Düsseldorf. João Vasco Paiva’s ‘Unlimited’ (2014) has also been selected for screening in the Film Sector’s Library. The work details the rapid spanning, across land as well as above and below water, of Google Earth-rendered territory. It references Fernão Mendes Pinto’s journey from Europe to Asia in the 17th century, juxtaposed with a composition by Beijing rock band Vagus Nerve. João Vasco Paiva has been widely exhibited in museums and galleries internationally, including a solo exhibition at Museu Nacional de Arte Contemporânea do Chiado in Lisbon, Portugal; a citywide public project with Media Art Asia Pacific in Brisbane, Australia; as well as participating at the Encounters section of Art Basel Hong Kong in 2015, curated by Alexie Glass-Kantor.

Sun Xun has been selected for the 2016 Audemars Piguet Art Commission. One of his most ambitious projects to date, Sun Xun will present ‘Reconstruction of the Universe’ (2016), located on the Miami Beach oceanfront. In addition to 2D and 3D animation, the work includes traditional scroll paintings, ink drawings, various architectural and design elements, as well as sound. Five films loop continuously on screens, utilising different materials to symbolise the five elements—metal, wood, fire, water, and earth—that structure the universe according to Chinese tradition. The large-scale installation amounts to a prolonged meditation on time by bridging classical and modern art, and exploring the history and metaphysics of the world that surrounds us. Widely considered one of China’s most talented artists, Sun Xun has been granted several awards including the Best Young Artists award by the CCAA in 2010. He has held multiple exhibitions around the world, most notably at the Guggenheim Museum, New York; Yuz Museum, Shanghai; the Metropolitan Museum of Art, New York; Vancouver Art Gallery; and Taiwan Museum of Fine Arts, Taipei. 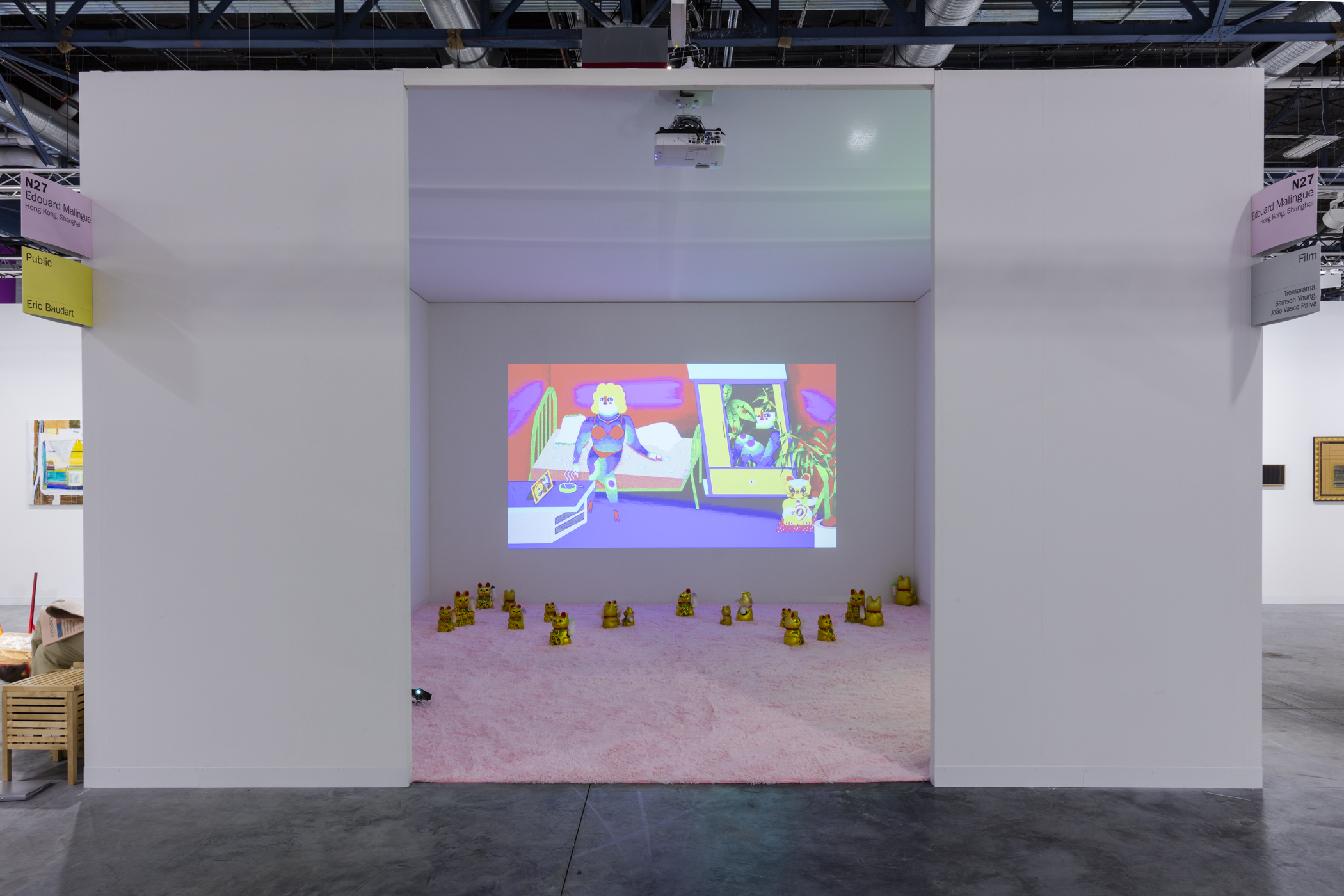