“The experience of trauma, whether actual or imagined, can lead to a variety of peculiar and unexpected outcomes. The distorting effect on body image, defined as a person’s feelings of the aesthetics and sexual attractiveness of their own body that may be forced by culture or their surroundings, can be particularly strong. In Anatomy of Anxieties, the body however is conceived not only in terms of human flesh and bone, but metaphorically. It can be seen to encompass the steel and glass structure of a building, or the landscape as living organism, both forms of bodily representation are equally subject to being the site of fantasy, trauma and perversion.

Traversing between dark humour and deadpan irony, and at times morbid, and other times playful fascination with the instruments (CCTV surveillance, broadcast television, the Stora Enso Building in Helsinki, Finland), and instrumentalised subjects of control, the works in the exhibition dissect the fantasies and dominant cultural narratives we tell ourselves, while pointing to not only how such representations of the self begin to crack under the strain of their own artifice, but what possibilities might lie beyond the psyche’s breaking point.”

Hans Bellmer’s work explores personal trauma and how the subconscious expresses itself through a surrealist style of disfigurement and dismemberment of the body. Inner trauma can reconfigure the mind’s ‘map’ of the body as well by appearing to imbue body parts, such as a foot or arm, with the same sexual and erogenous function as genitals. Bellmer is widely known for his images and sculptures of a large constructed doll, a symbol of childhood, femininity, sexual fantasy, and political victimisation, whose slippery moods and poses speak in a variety of psychologically compelling ways. On display are a set of classic photos from ‘Les Jeux de la Poupée’, the book of poems by Paul Eluard written in 1939 to accompany Bellmer’s staged settings for his doll.

A graduate from the Staatliche Hochschule für Bildende Künste in Frankfurt, Ceccaldi has gained critical acclaim for his perturbing post-gothic works. On display is a collage on canvas piece, which juxtaposes three banal photographs of de-humanised urban dwellings against a dual tonal background – the glittering silver paint contrasting against the adjacent flat black surface. Trickling from the top edge are narrow streams of measured dark blue paint. Conveying impressions of control yet alienation, Ceccaldi’s work builds a dialogue with SUPERFLEX’s video Modern Times Forever, and introduces his wider practice that relates to post-humanism as well as commodified and sub-mainstream countercultures.

Working across performance, video, installation, object making and drawing, Collar’s practice is engaged with experimental archaeology, history, magic and the epic. Her performance will be centred around a man’s head carved in oak, which appears severed; prompting thought on iconoclasm and the historical beheadings of Cicero, John the Baptist and Salome, amongst others; the happening will involve speech and sound as well as intimate interactions with the humanised object.

Laurent Grasso is a highly celebrated conceptual artist who, across multiple mediums, engages with theories of epistemology by blurring our notions of past, present and future. His displayed video Polair, 2007, depicts floating electrically charged white particles through still shots of Berlin and its TV Tower. Evoking an unsettling sense of danger and awe on a city-wide scale, like witnessing a rare weather event, or the hypothetical prelude to deadly radioactive fallout, Grasso’s video depicts similar miraculous yet unnerving phenomena explored in scenes of the artist’s Renaissance-inspired paintings Studies into the Past, 2010-2012.

Andy Holden’s artistic practice explores the anthropomorphic characteristics of everyday objects through a range of media. Holden’s Eyes in Space, 2014, comprising wobbly eyes glued onto wallpaper printed with images of the cosmos, and inspired by the artist’s large-scale paintings, not only summons an uncanny feeling of being closely monitored, as if surrounded by a phalanx of cartoon-like paparazzi, or the prickly gaze of a giant guilty conscience turning on itself, but offers the viewer an opportunity to step back from the daily tit-for-tat of personal or, more broadly, global political disagreements and see ourselves from the viewpoint of outer space, as the famous photograph of Earth taken aboard Apollo 17 in 1972 did, which seemed to condense human history and suffering to the size of a shiny blue marble.

Tetsumi Kudo’s work explores both the effects of hypothetical disaster on a large-scale, such as radiation resulting from a nuclear attack producing mutant bodies spanning generations, as well as the gnawing pain of the human condition – humanity’s continued willingness to inflict suffering on others through warfare and destruction – weighing on the creative artistic mind and pushing it to the brink of madness.

Rachel Maclean’s ornately gilded and framed digital print The Massacre of the Innocents, 2011, is inspired by Peter Paul Rubens’ paintings of the biblical episode depicting the gruesome murder of Jewish babies ordered by King Herod. while the event’s historicity remains disputed, becomes a joke, as if the story, embellished through history, mirrors the gradual corruption of childhood innocence as one grows up in today’s media-saturated world of beauty bar adverts, frothy Starbucks lattes, and dashing animated Pixar heroes. Rubens’ painterly depiction of baby head bashing, in Maclean’s rendition, turns into a bacchanalia of corporate interests wildly mating with cultural capital. Both Di Massimo and Maclean’s works share similar undertones of masochism masquerading as pleasure-filled orgies.

Cindy Sherman’s photograph Untitled 165, 1986, part of the artist’s ongoing Untitled film still series, continues her critique and parody of female stereotypes in popular cinema. In this work, the artist peers out from a tree-lined forest donning a prosthetic, rabbit-like mask over her mouth and distorting her face. Like a frightened animal locking eyes with a human, the work suggests parallels to the dominant relationships at play between human and animal, or male and female, as manifested by the power of the gaze. Sherman’s costumed role-play suggests parallels as well to Rachel Maclean’s grotesque creatures, all played by Maclean herself, wearing excessive make-up and tourist tat and carousing for the viewer in a debauched Reubensesque landscape.

Cui Xinming creates oil on canvas works that express, in an elaborate and vivid painterly style, the tumultuous thoughts and reflections of a younger Chinese generation. Sleepwalker – Summons, 2013, depicts a group of youths walking steadfast into a luminescent forest. At once beckoning yet threatening, the scene captures the inner turmoils experienced when undergoing a phase of personal development. As an observer, Xinming examines his position with regards to society and the values of those who surround him, treating the canvas as an extension of his visions and internal tensions, casting upon it incredulous scenarios and hypnagogic happenings.

SUPERFLEX’s film Modern Times Forever, 2011, visible 24-hours a day during the exhibition and from the street outside, depicts what would happen to the Stora Enso building in Helsinki, Finland, as an architectural and ideological symbol over the next few thousand of years, if only time would affect the building. As the film gradually progresses, the building, designed by Finnish architect Alvar Aalto (1898 – 1976), decomposes in situ like a Modernist corpse or monument to rapid 20th century economic growth and industrialization in Finland. 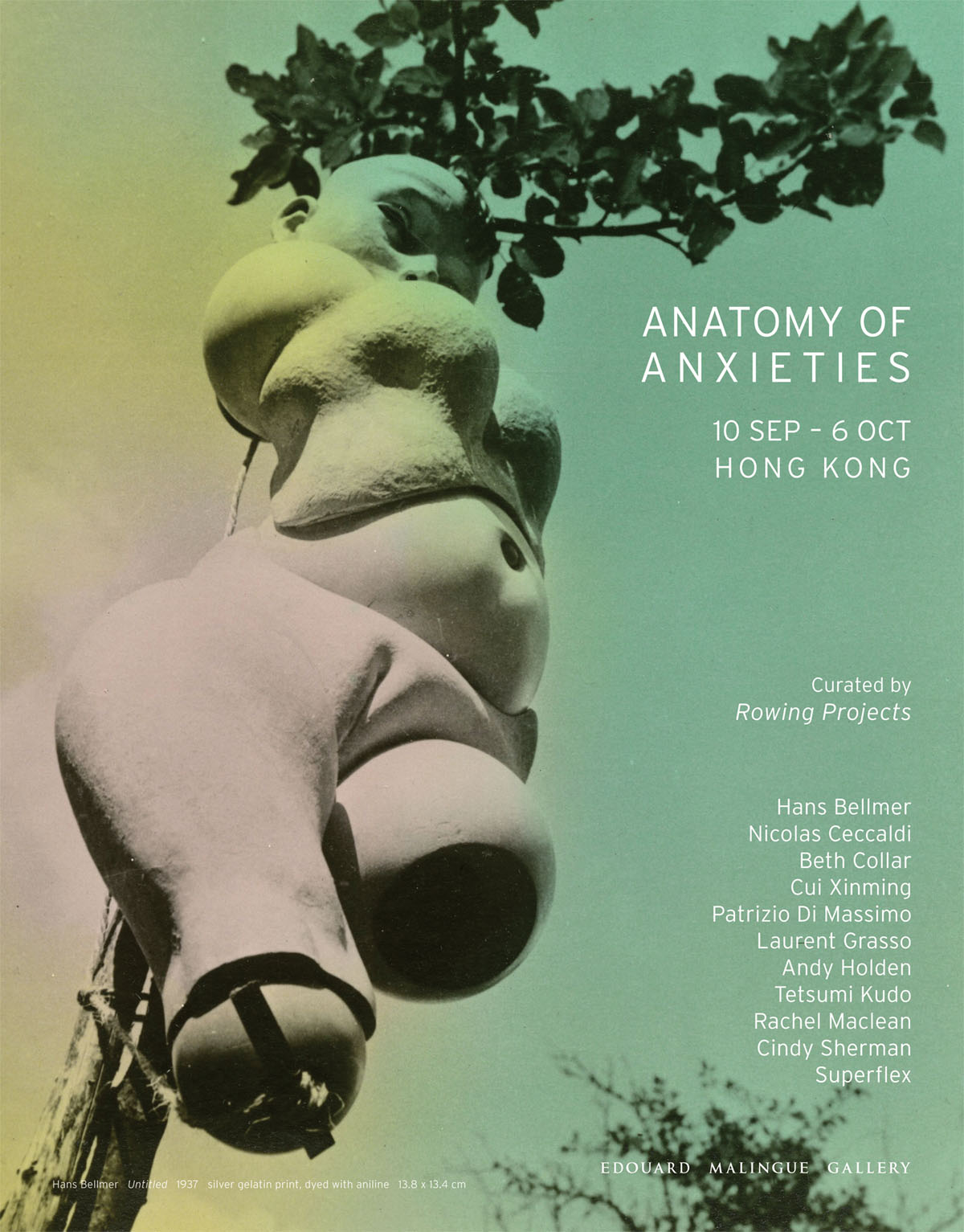