Edouard Malingue Gallery is delighted to present the first solo exhibition in Asia of the renowned Scottish artist Callum Innes featuring recent works in a variety of media, including monumental paintings two metres in height.

Callum Innes has gained a worldwide reputation as one of the most significant abstract painters of his generation. His distinctive minimalist geometric works have captured the attention of the international art world. Innes’ paintings are characterized by monochromatic zones of colour in precise geometric compositions and have a powerful, almost physical impact on the senses and emotions. Their effect is magical, entrancing and mesmerises the viewer.

Born in Edinburgh in 1962, Callum Innes studied drawing and painting at Grays School of Art, Aberdeen, from 1980 to 1984 and completed a post-graduate degree at Edinburgh College of Art in 1985. He was short-listed for the Turner Prize in 1995, won the prestigious NatWest Prize for Painting in 1998, and in 2002 was awarded the Jerwood Prize for Painting.

Central to Callum Innes’ art is the physical process of painting. His works are created through a complex process of application and removal of paint. Often he paints a canvas in one colour before using turpentine to wipe away the paint from one section of the surface. He may repeat this process several times, over several days, weeks or months. This systematic layering and dissolving gives his work its rhythm and beauty. Paradoxically, while the act of creation can be uncertain and tense, the end results are calm and meditative.

A highlight of the exhibition is Untitled no. 82, oil on linen, painted in 2011 (illustrated right). This monumental work appears to be mostly white with a red rectangle on the left-hand side. The red part was inspired by the brightly coloured side of a building in New York, but this was only the starting point. What is important is the way the painting was made. Innes first covered the canvas in a bluish-black pigment. Next he drew a vertical line in turpentine where eventually the red and white zones would meet and removed all the paint at the right side of the line. After letting the black pigment at the left side of the line dry for a week, he covered the entire canvas in a combination of red pigments. Finally he removed the red from the right side of the vertical line. Traces of red and black pigment remain as clues to the construction of the work and give it its vitality.

Also of special note are a series of smaller pastel works on paper, marking the first time Innes has worked in this medium. These are unveiled for the first time anywhere in the world in this exhibition. Although abstract, these too are often inspired by figures or architectural features. They have a feeling of balance and purity as well as a sense of both space and time. The luminous quality of Innes’ paintings no doubt derives from the brilliant light witnessed by the artist on his walks on the east coast of his native Scotland.

A third powerful medium represented in the exhibition is oil on oil paper in the Cento Series, showing how Innes is continually exploring new media and artistic directions. Like all his works, these impressive, two-metre-high vertical paintings elicit a response on many levels – emotional, physical and even spiritual. 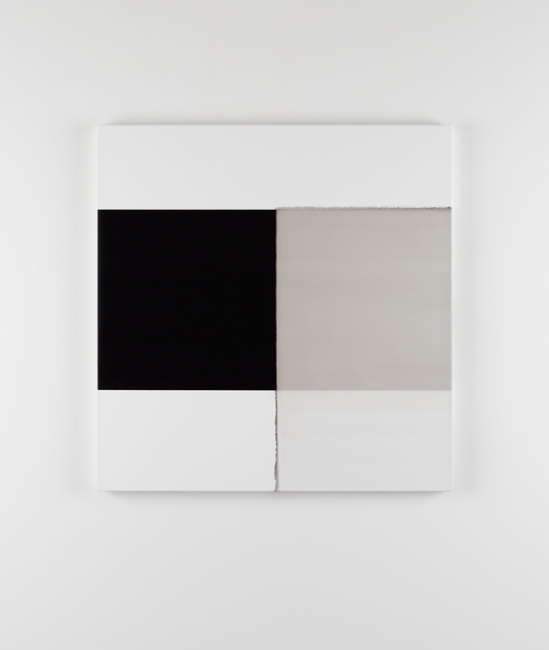