Edouard Malingue Gallery (Hong Kong) is pleased to present the second edition of ‘Film Screening’, a summer programme initiated in 2017 focusing on moving image. This iteration brings together six artists from Hong Kong to China to Taiwan and features works such as ‘The Prophet’ (2016) by Su Yu-Hsien, ‘The World of Yesterday’ (2017) by Ko Sin Tung, ‘Double Talk’ (2018) by Tao Hui, ‘Forest, A Man, A Baby & Aristocratic Life’ (2015) by Evelyn Wang, ‘Wong Ping’s Fables 1’ (2018) by Wong Ping and ‘Tell Me What You Want’ (2017) by Yu Cheng-Ta. By presenting this group of filmmakers simultaneously, the film series aims to urge a deeper contemplation of each practice and allow for the possibility of dialogue between their oeuvres.

Taiwanese artist Su Yu-Hsien primarily addresses the people and elements around him. By measuring the difference between himself and the other, life and media, he creates distance and a place for subjectivation, thinking about how to achieve a state of Zen without chasing after it vigorously. It is precisely this sense of incredible confidence that he seeks to pursue. ‘The Prophet’ (2016) is a restaging of an old play created in 1965, originally written by the Taiwanese avant-garde artist Huang Hua-Cheng (1935-1996) as one of the first series of performances organised by the magazine ‘Theatre Quarterly’ in the Cardinal Tien Cultural Centre of Taipei, a marker of the beginning of Taiwan’s postwar experimental theatre. The playwright had hoped to break traditional theatre modes and proceed according to the scenes described in the script but it was not adopted by the director at the time. As such, Su Yu-Hsien decided in 2016 to invite two of the original performers back to the scene and restage the “absent” parts of the play. In ‘The Prophet’, the viewer observes as the couple go to watch the stage play only there are no actors, only light and shadow, movements of the curtains and pulley sounds onstage. The aged male and female protagonists talk in the audience seats and the dialogue expresses the spiritual split of the modernist intellectuals. After a lapse of half a century, ‘The Prophet’ is a re-understanding of the narrative outside the original story as well as an attempt to interpret its absence once again.

Moving over to Hong Kong, Ko Sin Tung is concerned with the impact of ‘things’ and investigates, through a myriad of mediums and materials, including moving image, the psychological influences private objects project and the idiosyncratic functions they’ve been personally channeled to fulfill. Observing the city’s inhabitants and their close-quarters, she identifies with curiosity their values as dictated through the items they treasure and keep, slowly observing how these objects mirror ways of life, or in the very least, illustrate what is expected for living. ‘The World of Yesterday’ (2017) is a double-channel video that reflects upon the relationship between technology and modern life. The imagery she employs such as, a sink, a building, a street scene, comes for the most part from everyday life, all to the poetic and reflective subtitled narration of the observer. She employs the binary colours of blue and red – a visual cue that plays off the subtitles urging a need to look back and remark on the speeds of change. Ultimately, the film maps an urban environment, weaving its visual ordinariness with commentary that seems related yet detached, as if remarking on the existence of non-interacting worlds or the contemporary call for systematic adaption.

Tao Hui is a Chinese artist born in the city of Chongqing who uses the creative language of imagery and installation art to express collective experience, the focus of which is often social identity, gender status, ethnic issues and cultural crisis. Particular to his practice is a reflection upon the cultural psychology and aesthetic needs of society today in metaphorical ways. The scenes he creates are mostly absurd and even exaggerated; certain characters appear, each of which have certain metaphorical qualities, such as tarot cards and the spiritual colours of major emotions. Running throughout his work is a sense of “misplacement”, prompting the audience to face their own cultural histories, living conditions and social identities. In the work ‘Double Talk’ (2018), Tao Hui shows an interest in K-Pop culture, using a double-screen video installation to depict the story of a Korean singer idol who rises from death. Through a Q&A session with a journalist living after him, the artist explores how popular culture and mass media can have an impact on individuals.

Born in Chengdu, Evelyn Taocheng Wang is a Chinese artist who currently works and lives in the Netherlands. Her works explore her identification as transgender and wander around the boundary of matter and spirit, between virtual reality and the creation of fantasy. At the core of her practice is the notion of cultural relativity of the body as well as the change of its representation with that of time and place. ‘Forest, A Man, A Baby & Aristocratic Life’ (2015) is based on the 10th century Japanese folklore ‘The Tale of the Bamboo Cutter’ in which an old, childless bamboo cutter called Taketori no Okina finds a little baby girl in a luminous stalk of bamboo and names her “Kaguya-hime (Princess Kaguya)” who grows into a woman of ordinary size and extraordinary beauty in just three months. As the tale goes, five princes approach Taketori no Okina requesting to marry the beautiful Kaguya-hime. She promises to marry the one who manages to bring her her favourite treasures but ultimately they all fail due to their incapabilities and deceptions. The Emperor of Japan, Mikado, then asks her to marry him but she equally rejects him. In the end, Kaguya-hime returns to the Moon, leaving the everyman in disbelief and her earthly foster parents in tears. Evelyn Wang modifies aspects of the original narrative interweaving its composition with her own life and personal experiences. Fairy tales have certain moral connotations and are often full of familiar cultural references. As such, this is a vehicle that can be reconstructed continuously and used for Evelyn Wang’s exploration of gender, society, culture and identity, as well as the patterns and cinematic styles of theatre through images.

Hong Kong artist Wong Ping uses flashing, pop-like imagery juxtaposed with visual and auditory narrations to explicitly touch upon sex, politics and social relations. Building a fantastical animation world, Wong Ping combines the crass and the colourful to mount a discourse around repressed sexuality, personal sentiments and political limitations. Hong Kong born and raised, he creates alter motifs for his observations of society, from teenage to adulthood, using a visual language that sits on the border of shocking and amusing. ‘Wong Ping’s Fables 1’ (2018) is a collection of three vignettes employing animals as the allegorical characters to touch upon various conditions of society: the first a loveless relationship between a tortoise and an elephant; the second a chicken police officer with Tourette Syndrome who soars by being instafamous only to fall from grace dramatically because of excessive media attention; the third a tree who is mentally battling with a cockroach as it scares the poor little tree to death on a bus.

Yu Cheng-Ta from Taiwan often involves verbal communication with the subjects and viewers in a playful manner to create the concept of “life theatre”, that is, deliberately setting up real life situations as the shooting scenes. The work ‘Tell Me What You Want’ (2017) is about the exchange of sights, desires, friendships and needs between a traveler and a foreign culture. It starts with David on the streets of Malate in Manila, as an outsider, gradually developing friendships with the “Marketing Coordinators” active among the local streets. The various transactions that have arisen from the filming, as well as the relationships and processes of multiple kinds that have developed over the course of these encounters, are intertwined with Malate’s local reality. The network of human relations, cross-cultural desires of different kinds, as well as the gazes and illusions conjured by one’s imagination, are meshed together. ‘Tell Me What You Want’, as a common greeting for attracting guests on the street, points directly to the transactional nature of the streets of Malate. The artist fuses local urban negotiation techniques during the process of film production, experimenting with the human relations and economic structures in such interactions, while also drawing out the definitions of friendship exchange and behaviours in different cultures. This is juxtaposed with the stereotypical impressions of nationalities and the class consciousness hidden behind touristic entertainment and cross-border transactions. 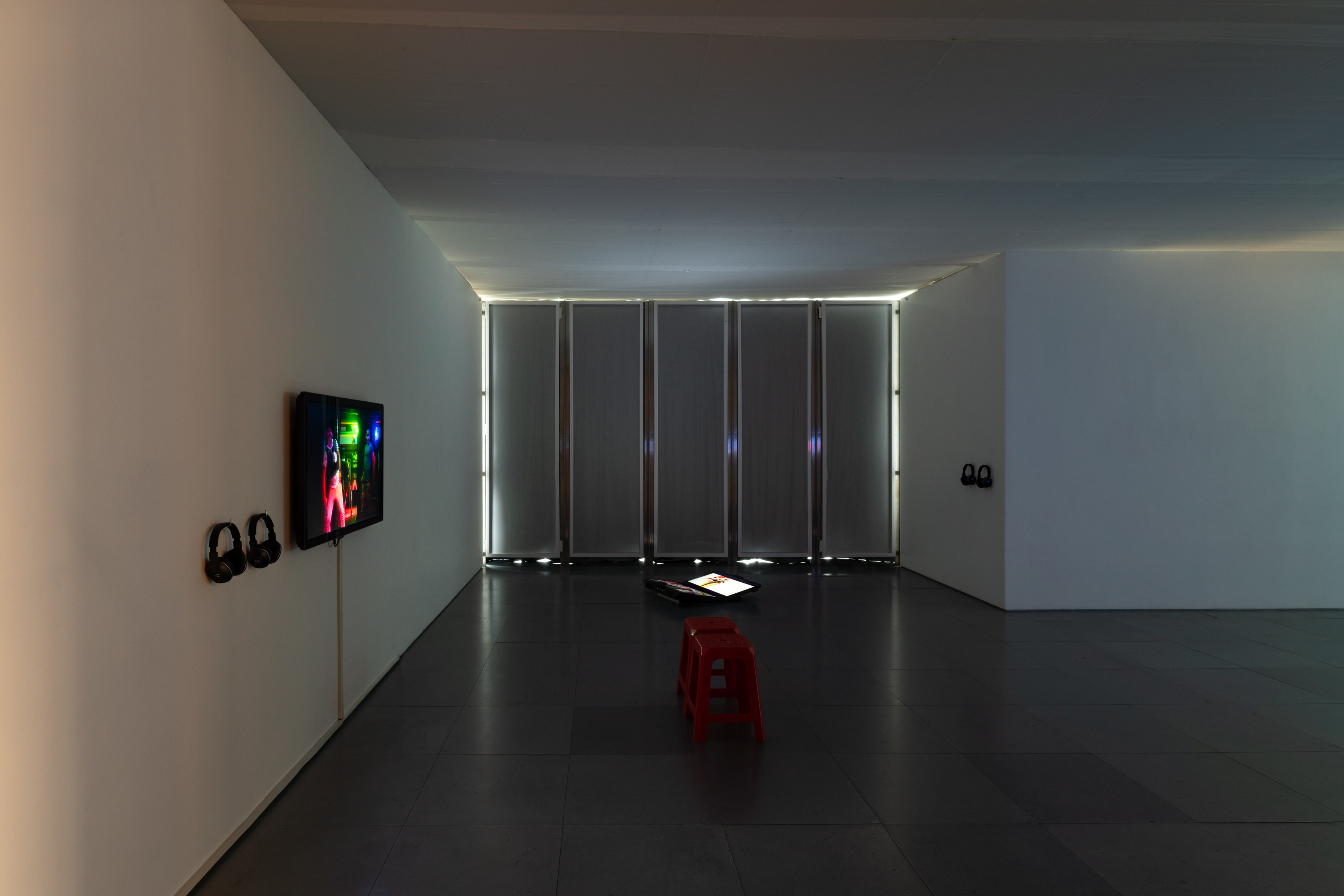