Responding to transcontinental considerations of history, power, time and discovery, Edouard Malingue Gallery is pleased to present a focused series of film screenings bringing together, for a one week period at a time, five artists working between Asia and the West. Presented in a setting that instills calm and considered viewership will be works by Ho Tzu Nyen (b. 1976, Singapore), Mark Geffriaud (b. 1977, France), Laurent Grasso (b. 1972, France), Kwan Sheung Chi (b. 1980, Hong Kong) and Sun Xun (b. 1980, China). By placing this group of filmmakers in sequential individual focus, the film series aims to urge a deeper contemplation of each practice and allow for the possibility of dialogue between their oeuvres.

Initiating the programme will be four key films by Ho Tzu Nyen who via employing a plethora of historical references unravels unspoken layers of Southeast Asian history whilst equally pointing to our own personal unknowns. ‘The Cloud of Unknowing’ (2011), for example, is an epic work presented by Ho for his representation of Singapore at the 54th Venice Biennale, which explores the expansive subject of the representation of the elusive and amorphous cloud. Inspired by philosopher Hubert Damisch’s thesis on the form’s aesthetics and symbolism ‘A Theory of /Cloud/: Toward a History of Painting’ (1972), the film incorporates a set of eight vignettes, each centred on a character’s representation of the cloud, whilst referencing the work of Western masters such as Caravaggio, Francisco de Zurbarán, Antonio da Correggio, Giovanni Lorenzo Bernini, Andrea Mantegna, and Rene Magritte. The link between Eastern history and Western traditions is further referenced by ‘EARTH’ (2009), which presents a pile of bodies in the wake of an unspecified catastrophe, along with a tangle of wires and cables, stacks of wooden pallets, cardboard boxes, dead fish and fluorescent light tubes. A direct reference to Caravaggio’s The Incredulity of Saint Thomas (1601–02) and his technical use of ‘chiaroscuro’, the work is brought to life by the score that coincides with the tentative ruminations of the emerging visual elements. Beyond art historical references, ‘Gould’ (2009-2013) serves as a direct reference to the famed maestro pianist Glenn Gould, and depicts a man playing the piano to extreme velocity while his head bobs, a motion that is eventually revealed as being dictated by a guiding white-gloved hand. A reference to control, puppetry, on an individual and institutional level, the istoria points to manipulations that does not seem to be. Finally, ‘Newton’ (2009) references the great British physicist who discovered gravity, by presenting a clinical setting in which books, the source of knowledge, are dictated to drop, only to be repeatedly blank, as the white computer screens upon which the protagonist types, suggesting a sort of unwritten history.

Veering towards a consideration of literature, imagery and how it serves towards the construction of time and memory is the work of Mark Geffriaud. Presented for the first time in Hong Kong will be his epic film series ‘deux mille quinze / two thousand fifteen’ (2016) composed of 15 different films showing multiple video projections of footage shot during his recent travels in South America. Taking as a conceptual starting point Samuel Beckett’s novella ‘Company’ in which an older man bemoans his confinement to the present, Geffriaud sets to explore notions of time as advocated through civilisations and communicated through filmic captures and narrative voice. Two sites compose the pillars of ‘two thousand fifteen’; the first, an observatory construction site in the Atacama Desert, Chile, at the top of Mount Armazones, where astrophysicists are building one of the largest telescopes in the world and hope to travel back in time to witness the birth of the first galaxies. The second site, set on the shores of Lake Titicaca, located between Peru and Bolivia, is where a set of large stones were abandoned for unknown reasons more than a thousand years ago. Whilst various theories exist regards their intended use, these are all ultimately speculations about the past. Between the contemporary and ancient site though, which both look to different degrees at the past, lies a land, that of the Aymara people, who are the only people on earth to have an inverted sense of time: that the past lies ahead and the future behind. Capturing footage through automated shutter imagery and juxtaposing shifting voices – initially speaking in the first person plural and subsequently in the second person at the very end – Geffriaud breaks down the linear time confinement of Beckett’s protagonist and presents an oscillating space for which the story to unfold.

Developing on notions of discovery and time as well as power is the work of Laurent Grasso, whose complex conceptual practice delves into science, history, mythology and supernatural phenomena to weave a research-filled narrative bordering the actual and the inconceivable. Oscillating between multiple temporalities as well as geographies, Grasso engages our notions of time and locale, creating work that tests our knowledge in a manner tending on the epistemological. At the heart of every thread in Grasso’s practice is a film; an out worldly sequence that is of this lifetime yet extends far beyond our limits of experience. ‘Soleil Noir’ (2014) slowly pans from an aerial perspective a fallen Pompeii, the ruins standing as a reminder of humanity’s quest for improvement and its inevitable fatality. A 16mm film created using a drone, conventional human vision is substituted for that of an object allied with war and surveillance. Unpopulated, the only living creature is a wandering dog, which under the spectra of lunar light, appears as an eerie incarnation of the mural subjects. Seemingly supernatural, the viewer is lured to address the relationship between reality and fantasy, inertia and livelihood. Delving deeper into past history, science and the power of observation is the film ‘Uraniborg’ (2012), which presented as part of a major solo show at the Jeu de Paume and Museum of Contemporary Art Montreal, takes its source of inspiration from the “palace of Urania”. Referencing the muse of astronomy, the grand architectural construct was built in 1576 on the island of Ven, between Denmark and Sweden. Financed by King Frederick II, the palace housed the biggest observatory in Europe, where the astronomer Tycho Brahe spent twenty years recording and analysing the configuration of the stars and movements of the planets. Akin to a documentary, ‘Uraniborg’ seems to focus on myth, presenting something that no longer exists. Drawing on Grasso’s fascination with discovery and the unknown, the film explores a site that developed prior to the invention of astronomical telescopes by having multiple openings onto the sky. Supplemented by a voice-off, the viewer is invited to engage in a sense of outworldly exploration.

Tending towards current political commentary, Kwan Sheung Chi tenaciously pursues a conceptual practice rooted in criticism of status quo, assignations of value and modes of existence. In particular, Kwan unravels Hong Kong’s relationship with money, its political framework and the livelihood of those who inhabit it. ‘A Flags-Raising-Lowering Ceremony at my home’s cloths drying rack’ (2007), for example, was realised the year of the 10th anniversary of the establishment of The Hong Kong Special Administrative Region of the People’s Republic of China. Kwan asked his parents to perform a flags-raising-lowering ceremony from their home’s cloths drying rack, with the HKSAR regional flag, and the flags of PRC and The UK. Artist Lee Kit hand-painted the HKSAR regional flag following the detailed instructions in “The State’s Standards of The People’s Republic of China, GB16689-1996” issued by The State Authority of Technical Monitoring. The national anthem of the associated flag was played or suddenly paused while the corresponding flag was raised or lowered to mount a reflection on the ambiguity of Hong Kong’s future. Illustrating a dark sense of humour, ‘Doing It With Mrs Kwan—Making Pepper Spray’ (2012), presents Wong Wai Yin (Kwan’s wife) posing as a DIY instructor akin to those found on Youtube albeit delivering advice for assisted suicide and the creation of a weapon or item for self-defense. Dry, the video follows ones providing assistance regards everyday problems, an approach that prompts us to realise how we can focus on the mundane whilst not tackling the major threats to our existence such as the dissolvement of democracy. Emphasising a sense of futility is the work ‘Drinking a glass of hot chocolate with a fork’ (2011) that, purposely silent, presents the slow but eventual progress that the film title suggests. Similarly, ‘Take away an “Iron Horse” barrier from the entrance (designated protest zone) of the Central Government Offices’ (2012) presents a series of barriers placed in front of the Central Government Offices that have been wrapped in white tape, repeatedly, a mummified visual nod to the banality of protest and self-protection/preservation.

Culminating the film programme series is the work of Sun Xun, whose artistic practice fuses the line between art and animation to build an investigation of recent and past histories, intransigent conflicts and tensions. Presented will be a focus on the major new work by Sun ‘Time Spy’ (2016), exhibited for the first time in Hong Kong. Part of ‘Reconstruction of the Universe’ it was initially created following Sun’s selection for the 2016 Audemars Piguet Art Commission exhibited in Miami Beach and marks Sun’s first 3D animation of its kind involving 10,000 woodcuts. The single-channel film follows the story of a magician who appears to be on a universal quest for the construction of time. Taking inspiration from the period of time he spent at Le Brassus, Switzerland, Sun depicts a quaint village where time is being mechanically created, spanning out into telescopic scenes and metaphysical realms with spinning planets. The relationship between time and space is due to Sun’s observation that the universe is vast, yet, the only thing that can be equally continuous whilst being limited, is time. Set to a dramatic classical score performed by the Beijing Philharmonic Youth Orchestra, ‘Time Spy’ mounts an engulfing and entrancing narrative on the universe, ‘that continuous clock’, our individual juggling, and how one continues upon an investigative journey of the shifting world that surrounds us.

Laurent Grasso has held residencies at the Villa Medicis, Rome and ISCP, New York. In 2015 he was awarded the esteemed Order of Arts and Letters by the French Ministry of Culture, and in 2008 was awarded the prestigious Marcel Duchamp prize. Grasso has upcoming exhibitions at MASS MoCA, USA and Pompidou-Metz, France. Furthermore, he was recently the focus of a major solo exhibition ‘Uraniborg’ at the Jeu de Paume, Paris, which travelled to the Museum of Contemporary Art, Montreal and was the subject of solo shows at the Kunsthaus Baselland, Basel and Bass Museum, Miami. Grasso’s work has been featured in multiple publications, including ‘Architecture Now!’ (Taschen). Moreover, his work is held in collections around the world, including the Centre Pompidou, Paris, Mori Art Museum, Tokyo and Leeum, Samsung Museum, Seoul.

Sun Xun is widely considered one of China’s most talented rising artists. He was awarded in 2010 the Best Young Artists award by the CCAA, the Young Art Award by Taiwan Contemporary Art Link and the Arts Fellowship by Citivella Ranieri Foundation (Italy). Sun Xun has held multiple solo exhibitions around the world, most notably at the Hammer Museum (Los Angeles), The Drawing Center (New York), Kunsthaus Baselland (Basel), A4 Contemporary Arts Centre (Chengdu), Minsheng Art Museum (Shanghai) and the Louis Vuitton Taipei Maison (Taipei). He has also been included in numerous significant group exhibitions at the Skissernas Museum (Lund), Times Museum (Guangzhou), Jordan Shnitzer Museum of the Moving Image (New York), Minsheng Art Museum (Shanghai), Kunsthalle Bern (Bern) and Taiwan Museum of Fine Arts (Taipei), amongst others. Furthermore, his video work has been widely exhibited at film festivals around the world, from Germany and Austria, to Sweden, South Korea, Brazil and Iran. 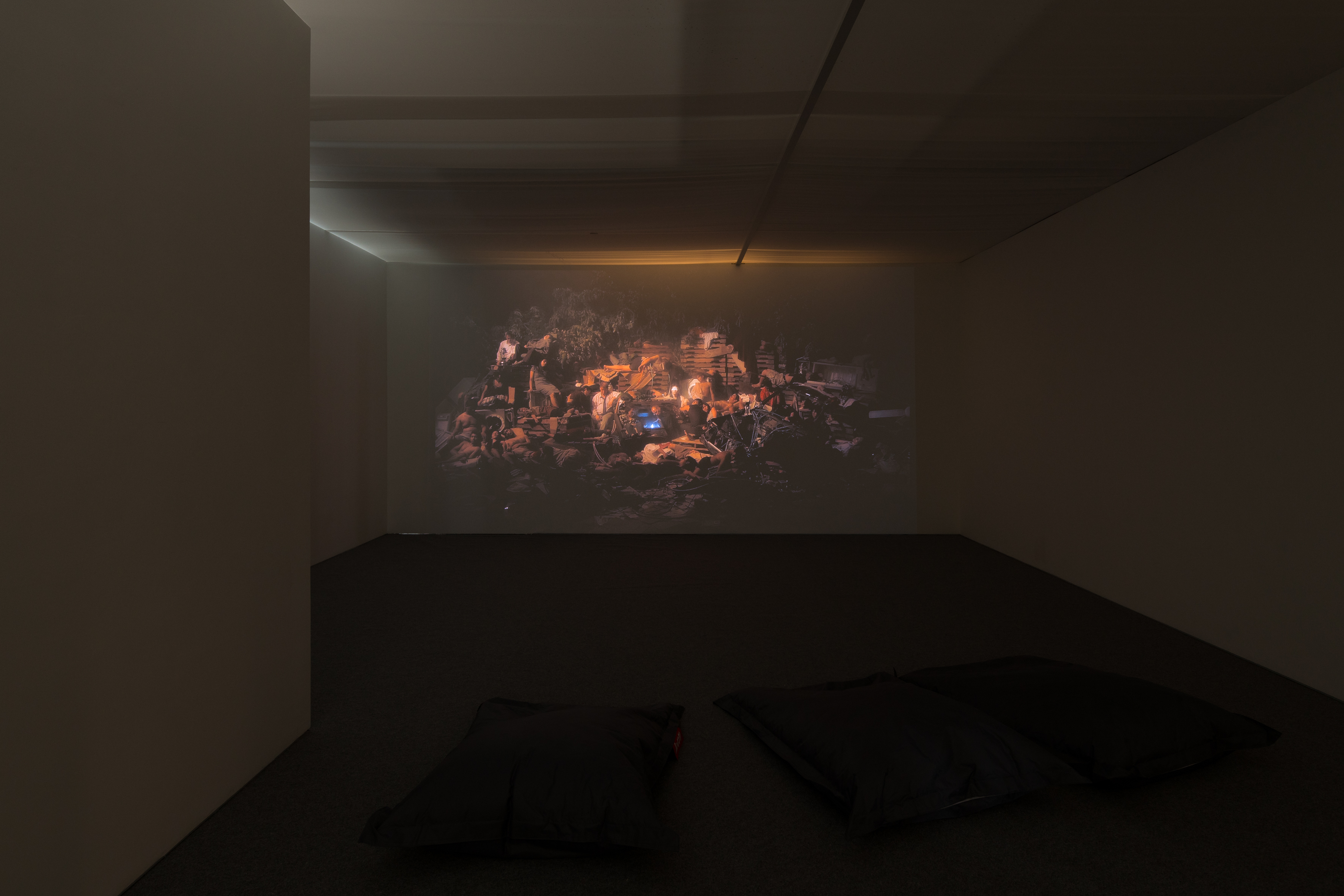