Our surroundings, as they shift and bend to the sways of contemporary society; us, our beings, responding to them, ever faster, ever sharper. ‘Adaptation’, the second solo show by Hong Kong artist Ko Sin Tung (b. 1987, Hong Kong) at Edouard Malingue Gallery, Hong Kong is an investigation into this process of corporal, emotional and mental attunement. It questions that self-adjusting process of fitting oneself into environments in order to survive, be at one. It goes a step further, however, and proposes: with the frequency of these constant shifts, are they indeed ephemeral in nature, or rather the foundations of a permanent future?

A graduate from the Department of Fine Arts at The Chinese University of Hong Kong, Ko Sin Tung observes the city’s inhabitants, their close-quarters, and identifies with curiosity their values as dictated through the items they treasure and keep, slowly observing how these objects mirror ways of life, or in the very least, illustrate what is expected for living. ‘Adaptation’, in particular, address how we are required to respond and become accustomed to supposed temporal permanences.

This status of self-adjustment is propositioned and questioned through a series of works, each of which approaches our surrounding’s oscillatory condition. At the entrance there is ‘A Blu-tack photo’ (2019) a little photograph of blu-tack in the midst of colour mixing, in transience between old and new. The shape is fluid, malleable – in flux. Captured via an image though, the fluidity is made still, the temporary converted to posterity. Small in size, the photograph forces you to look, to note, a viewing muscle that can be flexed throughout the rest of the exhibition as you pick up on details, a viewing approach that can also be turned and applied to oneself.

Eyes aflush, tone set, one then approaches ‘Adaptation’ (2019), a series of decorative moulds as one would find on the outside of buildings. Painted white, they meld into each other, despite their ornate detailing. Resembling figures, they each have their own individuality. Yet, this is equally met by a sense of mimeticism and camouflage as each masks itself into the other and their surroundings. Domestic objects, there is a sense of everyday familiarity. One cannot help, however, when observing them to capture a sense of the unfinished through their monochromatism, as if they were frozen in a moment before becoming something more.

This static feeling is heightened by ‘Surface’ (2019) the drywall walls, which appear mid-construction, mid-paint. This condition, intrinsic to the fabric of the environment the visitor finds themselves in, dictates and accentuates the sense of adaptation – walls being the very skeleton of the gallery space, what gives it shape and direction. It equally references our outside environment, the myriad of construction zones we’re exposed to, as society builds, morphs and expands. Moving through the gallery converted into site there are a series of photographs of parallelograms surrounded by darker shapes. Entitled ‘From dark to light’ (2019) these are in fact pits from construction sites – the dark gaping holes left by building progress and attempts. They have been inverted, however, resembling luminous abstractions rather than an abyss. Finally, a set of two sculptures, ‘Arrow’ (2019), lie on the floor – an agglomeration of semi-transparent road stickers making the arrow initially printed on them, unclear.

Ultimately, Ko Sin Tung in her consideration of self-adjustment creates an environment for outer and introspection. Following from her previous practice of experimenting with space, we can take that little extra moment to consider our own responses to things, places, objects in movement and change. We as individuals are never the same from one moment to another but ‘Adaptation’ is a zone for observing those nuances and through its comparative calm a chance to question: is our outer environment changing too fast, can our minds and beings move as well as follow forward? 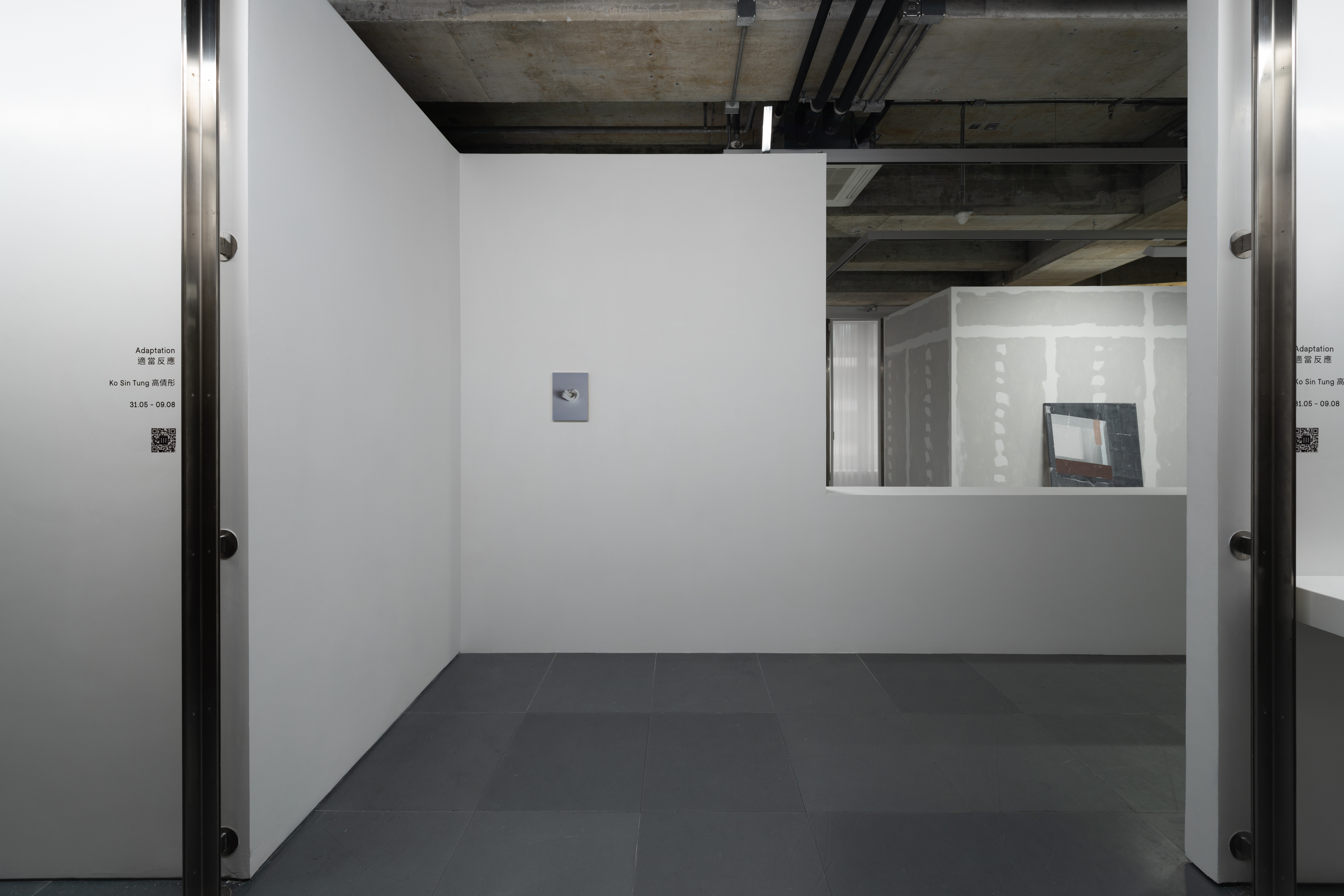