Meeting Point presents the work of two highly talented Taiwanese artists, Charwei Tsai and Chi-Tsung Wu, in collaboration with TKG+ Gallery, Taiwan. In this inaugural exhibition, Tsai and Wu will present, for the first time, a series of new works to the Hong Kong public.

Charwei Tsai and Chi-Tsung Wu were both born in the early 1980s when Taiwan was experiencing a period of drastic political reform and rapid economic growth. The complex history of Taiwan gave birth to a unique culture, where influences from China and Japan, as well as the local indigenous tribes, originating from the Pacific Islands, converge. Although Tsai and Wu were educated in different contexts – Tsai received a Western education whereas Wu attended a local Taiwanese school – their works are both steeped in Chinese culture and Eastern philosophy. This is the very meeting point for their artistic practices: a sensibility towards the poetic aesthetics of the East.

Tsai’s new series of work, entitled Incense Mantra, was created upon the occasion of this exhibition and includes four photographs and a video made in collaboration with Tibetan filmmaker Tsering Tashi Gyalthang. The project was inspired by Hong Kong’s history and naming as the “Fragrant Harbour”, due to its large production of incense from locally grown sandalwood. (Indeed, in the local Cantonese dialect, “Hong” means fragrant and “Kong” means harbour.) For this project, Tsai sourced a large piece of incense from a local store on Queen’s Road West – an area in Hong Kong known for selling objects used in religious and ceremonial offerings – and wrote on it the Heart Sutra text using Chinese calligraphy. (Heart Sutra is a seminal Buddhist scripture on the concept of impermanence that Tsai memorised as a child). Tsai then lit the piece of hand inscribed incense above a mirror reflecting the sky as an offering to the city. The project aspires to encourage a moment of contemplation on the spiritual significance of the sacred text while its physical state shows the text transform into ashes and smoke, revealing the backdrop of the city’s celebrated skyline. Through the opportunity of working within a local context in Hong Kong, Tsai expands her exploration of making works of art as objects of meditation and tools for spiritual and social practice. In addition to her new series Incense Mantra, Tsai will also present the artist’s book A Pilgrimage Through Light & Spells published by Idem, a historical printmaking shop in Paris. The book presents on the front side a short story written by Tsai of an imaginary pilgrimage through meditation and on the back is a selection of her previous works including Mushroom Mantra, Sky Mantra, Circle, and Ah.

Conversely, Wu’s practice reflects upon our perceptions of the physical and natural world and the mechanisms involved in the transformation of images. In Wu’s body of work, he constantly challenges himself by exploring the unknown possibilities of known materials and techniques. In this exhibition, Wu has created new works as part of his Wrinkled Texture series, which plays on the texturing techniques applied in traditional Chinese landscape paintings called Cun-fa. By crumpling the Cyanotype paper and exposing it under sunlight, Wu records an image of subliminal beauty that resembles Chinese landscape painting. By not being able to control the exact outcome of the exposed Cyanotype paper, Wu chooses to challenge the aesthetic of the “known”, creating an image that is neither strictly a photograph nor a painting, for it could perhaps be both. Wu’s work often revolves around themes of time, light, visual perception and links to memory, creating images that lie between illusion and reality.

At Edouard Malingue Gallery in Hong Kong, these two Taiwanese artists, Tsai and Wu, meet in a city where divergent cultures continue to merge together. In this exhibition, we will see how traces of Chinese culture and Eastern philosophy are interpreted and preserved in the works of these two artists. Whether their works stem from spontaneous moments or rational deliberations, Tsai and Wu hereby come together in the gallery space and engage in a unique dialogue.

Born in Taipei, Taiwan (1980), she currently lives and works in Paris and Taipei. Tsai utilises a variety of media in a politically engaged, performative practice. Geographical, social and spiritual concerns inform a body of work directed towards activating participation outside the confines of complacent contemplation.

Tsai has participated in international exhibitions such as the Sharjah Biennial and the Dojima River Biennale, Osaka (both in 2013), “Phantom of Asia”, Asian Art Museum of San Francisco and “Boundaries on the Move – A Cross-Cultural Diaologue”, Herzliya Museum (both in 2012), Yokohama Triennale and Ruhrtriennale (both in 2011), Asia Pacific Triennial (2009), “Traces of the Sacred”, Pompidou Center (2008), “Thermocline of Art: New Asian Waves”, ZKM Center for Art and Media, Karlsruhe (2007), Singapore Biennale (2006) and “J’en Rêve”, Cartier Foundation (2005). Her work is in the collection of the Mori Art Museum, Tokyo; Queensland Art Gallery, Brisbane; Sherman Contemporary Art Foundation, Sydney; Yokohama Museum of Art, Yokohama; and DSL Collection, Paris. In addition to her art practice, Tsai publishes, edits and designs Lovely Daze, a contemporary art periodical released biannually.

Born in Taipei, Taiwan (1981) where he currently lives and works. Wu’s work devotes great attention to the methods used in producing and interpreting images, which spans across different media, including photography, video, and installation art.

He received the top prize at the Taipei Arts Awards (2003), was short-listed for the Artes Mundi prize (2006), and received the WRO Media Art Biennale award from the Critics and Editors of Art Magazines. He has held several solo exhibitions around the world, including the IT Park, Taipei (2004 and 2009), Chi-Wen Gallery, Taipei (2009), and TKG+, Taipei (2012). His work has been exhibited in group exhibitions including “The Elegance of Silence”, Mori Museum, Tokyo (2005), “Artes Mundi”, National Museum of Cardiff, United Kingdom (2006), “Our Future, The Guy and Myriam Ullens Foundation Collection”, Ullens Center for Contemporary Art (UCCA), Beijing (2008), “Taiwan Calling – The Phantom of Liberty and Elusive Island”, Műcsarnok – Kunsthalle and Ludwig Museum, Budapest (2010), and WRO Media Art Biennale, Wroclaw, Poland (2013).

Lee is an independent curator; she currently lives and works in Taipei, Taiwan. Lee has co-curated “The Discreet Charm of Bourgeoisie”, Yi & C Contemporary Arts Gallery, along with Davide Quadrio and Rudy Tseng (2012). Lee is the assistant curator of the Dojima River Biennale, which will open to the public in July 2013 in Osaka, Japan.

In addition to her curatorial work, Lee writes exhibition reviews and critical texts for ARTCO and Art Collection+Design. 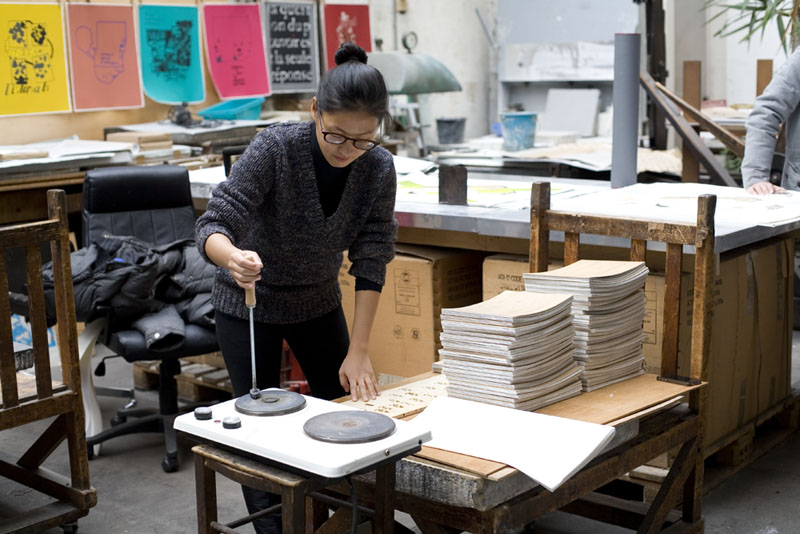