‘Polyrhythmia’ is a group exhibition revolving around the continuous global transformation of the urban landscape. Taking place in a shell office space due for development in the heart of Manchester, ‘Polyrhythmia’ brings together international artists connected to Hong Kong, Indonesia and Manchester, in particular João Vasco Paiva (Portugal/Hong Kong), Kwan Sheung Chi (Hong Kong), Ko Sin Tung (Hong Kong), Nick Crowe & Ian Rawlinson (Manchester/Berlin), Katerina Eleftheriadou (Manchester), Chris Paul Daniels & Sam Meech (Manchester) and Tromarama (Indonesia). Focusing on the notion of repetition as laid out in Henri Lefebvre’s urban theory, the works relate to construction and development focusing on rhythms of everyday life. Reflecting on the idea that there is ‘no rhythm without repetition in time and in space, without reprises, without returns, in short without measure’ (Henri Lefebvre, ‘Rhythmanalysis: Space, Time and Everyday Life’, 2004: 7ff) the exhibition brings together works that point to recurrence, using it as a base to discuss the wider topic of urban development extending itself globally. As such, ‘Polyrhythmia’ builds on our understanding of the term, that is the intermixture of different rhythms that are in constant interaction with one another.

On public view at pedestrian level is ‘Monument’ (2012), a towering sculpture by Manchester/Berlin artists Nick Crowe & Ian Rawlinson composed of stacked drums from a Pearl rock drum kit. Addressing through stature and title physical structures, the work equally refers to the recuperation of individual agency, freedom and individual expression, concerns of both contemporary life and rock music culture. Literally relating to rhythm through its components, ‘Monument’ equally points the precarity of repetition through its delicate stacking of each drum in the kit, an analogy for the sensitive collapse of structures. Moving into the space, a set of three dynamic ordinary printers positioned on three ascending parallel shelves periodically jut out sheets of printed A4 paper. Pointing to quotidian repetition, ‘24 Hours Being Others’ (2017) by Indonesian collective Tromarama connects with the site’s future purpose whilst pointing to individual rhythms as dictated through technology, conditions of labour, urban structuring and habit. Interactive, guests are welcome to pick up, read and keep one of the papers, which spell out sporadic texts in pseudo poetic form that relate to contemporary living.

Lining the rightmost wall is ‘Kulturbüro’ (2015) by Lisbon/Hong Kong-based artist João Vasco Paiva, a grid selection of riso prints Paiva collected in Zürich from an office that conducted colour tests for institutions publishing material for exhibitions, concerts and further cultural affairs. Amassed, organised and serially displayed, the tests – unclaimed over a period of six months – compel a reconsideration of what we assign value to aesthetically, how and why, whilst also pointing to ‘non-places’ and things. Furthermore, due to their tri-tonal quality, ‘Kulturbüro’ echoes a sense of aesthetic rhythm whilst alluding to the future incarnation of the current exhibition space as equally referenced by ’24 Hours Being Others’. Further marking the space is the site-specific installation ‘Natural Border’ (2017) by Manchester artist Katerina Eleftheriadou. Flowing from the brick wall in an extended straight line across the raw concrete floor, the work is neatly divided in bi-tonal stripes to resemble urban patterns or common street signage such as zebra crossings. Seemingly composed of pebbles, ‘Natural Border’ is actually an assemblage of different varieties of garlic cloves, a material detail that leaves the viewer wavering between attraction and seduction, aggression and repulsion. Vulnerable in its ephemerality, the repetitive sequence points to the precarity of borders, how these can shift, be violated, the work existing as a negotiation between aesthetics, materiality and politics.

Spread across the space are various moving image works. On a monitor, Hong Kong artist Kwan Sheung Chi’s film ‘One Million’ (2012) plays on repeat, showing notes in different currencies systematically counted up to one million. Through force of recurrence the act becomes trance-like, mesmeric, whilst pointing to capitalism, power, obsession and what drives society as well as urban change. In displayed relation, screened across the central white wall, is ‘One Square Mile’ (2016) by Manchester artists Chris Paul Daniels & Sam Meech, a surreal instructional video for sociologists, film-makers and property developers looking to “rightly read an area”. Juxtaposing filming techniques, a soundtrack and narration, the film – dotted around Manchester – hints at the rich diversity of urban spaces whilst demonstrating the absurdity of trying to represent them in any meaningful way. Further, projected onto a wall in a darkened room, is Hong Kong artist Ko Sin Tung’s film ‘24 Tubes’, which shows two hands holding a fluorescent beam – identical to those lighting construction zones – then letting them go, the immediate release solely being captured allowing your mind to compute the imminent fall, a motion that repeats itself with undefined by assumed conclusion.

Ultimately, ‘Polyrhythmia’ acts as a portal for considering everyday life in places amid flux, how bodies and complex environments each participate in the formation of entangled, pluralistic rhythmic fields. 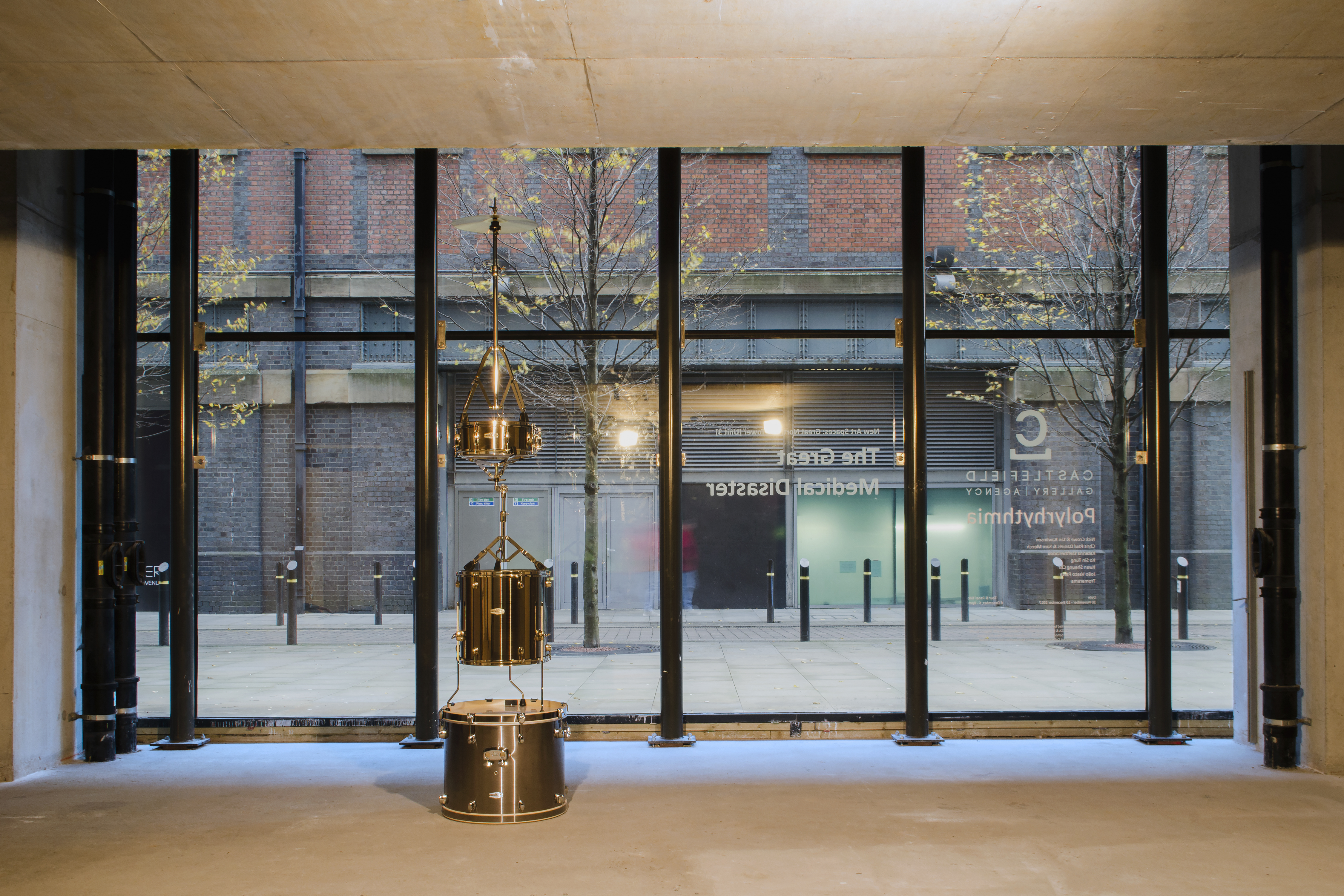