If the task of the classical painter is descriptive persuasion, by which nature could be represented in a picture with an almost immersive accuracy, the five contemporary painters presented in this exhibition take the opposite approach, achieving the illusion of nature by describing that which cannot be described but spells out the relations between man and the world. Varying in style and concept, the works on display – equally subjective and experimental in nature – testify to the vitality of the genre in their seeming lack of curatorial connection. Untethered from the shackles of technique and style, these artists permit subtle hints of criticism, metaphor and eccentricity to grace their work, providing an articulation for a plethora of considerations.

Beyond a prolific painter across traditional ink, colour powder and woodcuts, Sun Xun is more often considered a film director. On display is an ink on silkscreen installation, replete with Sun’s signature ambiguity and phantasmagoria wherein intransigent conflicts and tensions fuse the line between deception and reality, scraping the uncontested surface of politicised truth. Sun’s art thus acts as a theatre of the power play between authority, government, media and, crucially, those outside of its periphery.

Zheng Zhou is a painter of instinct: straddling an epistemological outlet and what Zheng calls “the divine will” beyond technical, aesthetic and moral considerations, each painting acts as a canvased portal unto a segment of observations from the world. Presented is imagery of death and monstrosity conceived from The Legend of the White Snake, a Chinese romantic tragedy through which Zheng articulates tales of humanity, desire and fateful causality.

At a distance, Yuan Yuan’s elaborate oil on canvas paintings nearly resemble in their visual authority a photograph. His works, however, crucially do not represent reality per se. Rather, his protagonists – sumptuous yet depopulated interiors ranging between states of wealth and abandonment – are explorations of details, narrative threads rediscovered in the remembrance of things past. Charged by such sheer desire, or need to understand, Yuan’s paintings evoke the sensorial organisation of the glitches or shifts between actualities: what could have been, could still be, or will eventually be. Akin to the process of tidying one’s household, they reference the Düsseldorf School of Photography, in particular Candida Höfer, and French writer Alain Robbe-Grillet’s work, in the sense that finality is never fully achieved. One grasps that Yuan’s paintings are struck not with the sense of luxury and shock they appear to offer, but with the harmony between its subjective and objective actualities.

Marked by gestural vivacity, Cui Xinming’s phantasmal paintings resemble displaced news stories or film stills as if recalled from distant mnemonic incidents. Permeating Cui’s works is a pervasive sense of subjectivity and critique – a distinct pulse from Zheng and Yuan’s practice – augmented by a series of historical, social and art historical references. As such, Cui captures the spirit of an environment we are familiar with, but one that is under the undefined auspices of political and ideological flux.

There is this experience, when we stare long enough at an object and its form unnervingly blurs. It represents the variances of our visual experiences when we approach Wang Zhibo’s paintings, whose protagonists, upon closer examination, are never depicted quite as they are. The two still life paintings which capture two distinct moments in an anonymous kitchen, for instance, present a compositional practice through which Wang explores the meta-language of painting, whilst The history of body, the history of sprite (2019) experiments with, and challenges, multiple manifolds of the body according to spatial, light and emotional variances.

Ultimately, ‘Sans Soleil’ is a pictorial travelogue, bringing together Edouard Malingue Gallery’s five painters to weave a meditative visual essay that harks back to French writer and director Chris Marker’s seminal piece of the same title. Taking subjectivity and fiction as a departure point, as does Marker, one is left privy to the nature and nuances of contemporary painting and how, as a result, the perception of personal and collective histories is affected.

A graduate from the Sichuan Academy of Fine Arts, Cui Xinming (b. 1986 in Shandong, China, lives in Chongqing) addresses, from his early series ‘Black Hole of Memories’ to more recent body of work ‘A Sleepwalker’s World’ and ‘Journey to the East’, his generation’s inner turmoil with regard to constant political, societal and personal change. Selected for the prestigious 2015 ‘Luo Zhongli 10 Years Review Exhibition’ at the Chongqing MoMA, Cui has exhibited in Hong Kong, Istanbul, Berlin, Beijing and Chengdu, amongst other locations. His work has been featured in multiple publications, including the South China Morning Post, ARTINFO, The Art Newspaper, Oriental Daily News, Flash/On, and Artron.

A graduate from the Printmaking Department of the China Academy of Arts in 2005, Sun Xun (b. 1980 in Fuxin, China, lives in Beijing) is considered one of China’s most talented rising artists. In 2010, he received the CCAA Best Young Artists award, Taiwan Contemporary Art Link Young Art Award, and the Civitella Ranieri Visual Arts Fellowship. He has held multiple solo exhibitions, most notably at the Hammer Museum, Los Angeles; Kunsthaus Baselland, Basel; and Yuz Museum, Shanghai. He has participated in numerous group exhibitions including The Robert H. N. Ho Family Foundation Chinese Art Initiative at the Guggenheim, New York; Kunsthalle Bern, Bern; and Taiwan Museum of Fine Arts, Taipei, amongst others. On top of worldwide screenings at film festivals in Germany, Austria, Sweden, South Korea, Brazil and Iran, Sun’s video work was also nominated for ‘Berlinale Shorts’ at the 62nd Berlin International Film Festival in 2012, and was presented at the Venice Film Festival in 2010.

Wang Zhibo (b. 1981 in Zhejiang, China, lives between Hangzhou, China and Berlin, Germany) creates oil on canvas paintings that confound our notions of time and space, channeling her works to represent the variances of our visual experiences. A graduate from the Oil Painting Department of the China Academy of Art, she has held solo exhibitions at The Armory Show, New York (2013) and Edouard Malingue Gallery Hong Kong (2013, 2016) amongst other locations. Her works have also been featured in group exhibitions at Shanghai Art Museum, Shanghai (2007); Today Art Museum, Beijing (2008); Museum of Contemporary Art, Taipei (2008); Penrith Regional Gallery, Sydney (2014); Chonqing Art Museum, Chongqing (2015); Villa Vassilieff, Paris (2017); and Times Museum, Guangzhou (2017).

Hangzhou artist Yuan Yuan (b. 1973 in Zhejiang, China) is internationally lauded for his painting technique and investigation of mesmerising spaces. He studied in the Oil Painting Department of the China Academy of Art in Hangzhou, where he gained a BFA in 1996 and an MFA in 2008. Whether presenting historic palaces or modest abodes, Yuan approaches the canvas as an exploration of humanity and the passing of time, yet with an element of mystique managed by the geometric details of the interiors depicted. Yuan’s work has been exhibited in Palazzo Terzi, Bergamo; Galerie Malingue, Paris; and ShanghART Gallery, Shanghai, amongst other locations. His work has also been featured in group exhibitions such as the 12th Shanghai Biennale, Shanghai; ROH Projects, Jakarta; and White Rabbit Gallery, Sydney.

Zheng Zhou (b. 1969 in Zhejiang, China) debuted by studying printmaking at the Zhejiang Academy of Fine Arts, which led to teaching positions at the Printmaking Department of the China Academy of Arts (1994-1996) and the China Academy of Arts Affiliated High School (2000-2010), before relocating to Beijing in 2013 to work as an artist. Conveying onto canvas a private stream of observational consciousness, as ad hoc as it may be, Zheng’s strokes – furtive yet decisive – depict an urgency to grasp, to depict and to capture that mesmeric multitude of the phenomena we, or more precisely he, is a witness to. 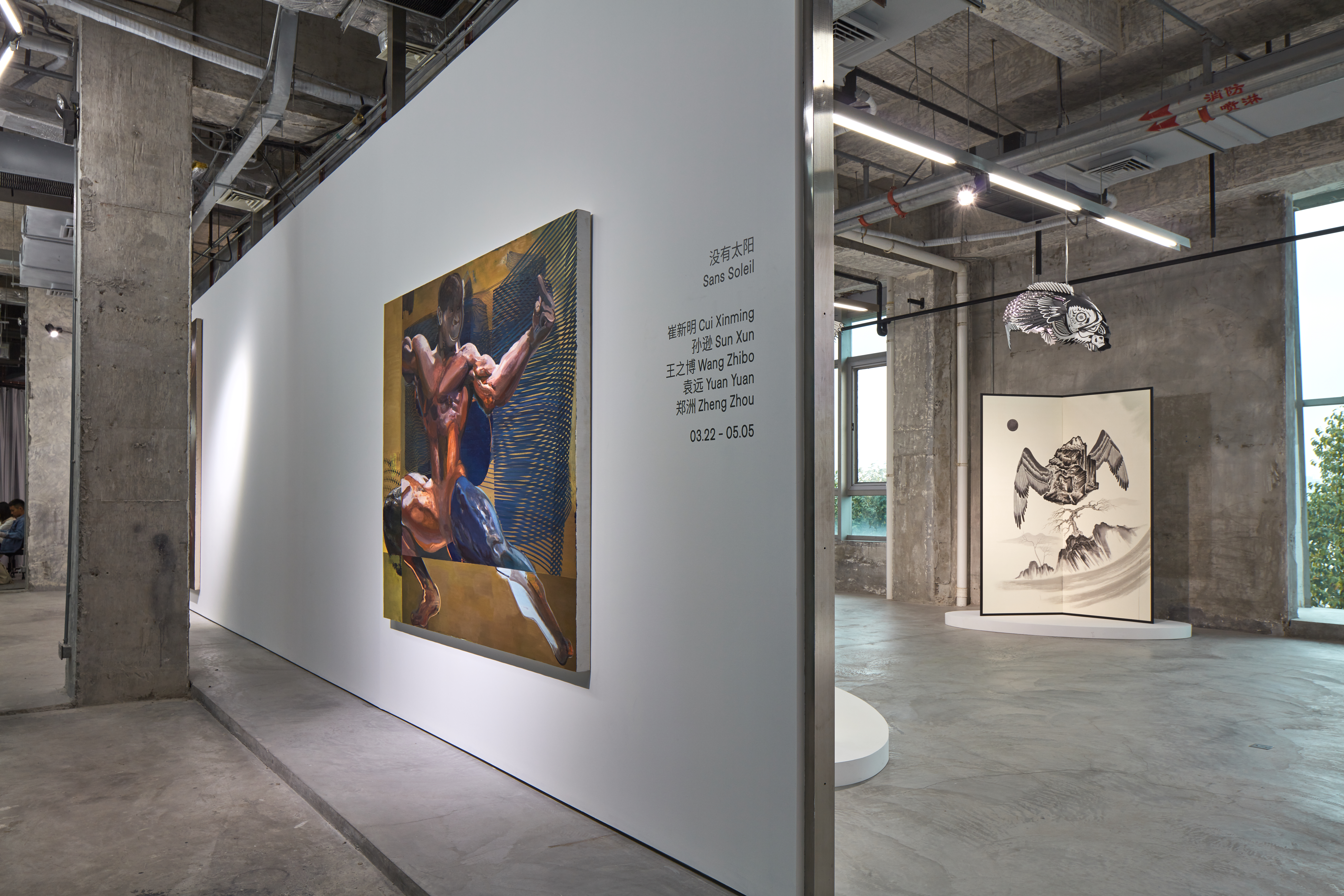