Sneakerotics: Further Materials for a Theory of the Young-Girl

Modern Hong Kong nightlife began with the California Restaurant in 1983. It then expanded to fill the neighbourhood surrounding the California Tower. The karaoke scene was dominated by California Red until it was finally acquired by a competitor in 2010. The soundtrack to Wong Kar Wai’s Chungking Express famously includes “California Dreaming”. Suburban gated community Palm Springs (California Garden in Chinese) is oriented around the main thoroughfare of Santa Monica Avenue. California Beach Club offers sunless tanning. California Fitness is a subsidiary of 24 Hour Fitness, itself headquartered in San Ramon, California.

A recent analysis of “Missed Connections”* data suggested that 24 Hour Fitness is the most common location for such tragicomic classifieds in the state of California. Back in Hong Kong, the major BBS HK-Golden includes a sub-forum dedicated to how-to guides posted on picking up women—namely the underemployed and, needless to say, highly coveted mistresses of powerful businessmen kept in luxury apartments—in the gyms of a certain residential complex that, incidentally, happens to be at the centre of the city’s under-construction cultural district.

The exhibition “Sneakerotics” proposes a position with regard to the parallel life of the California dream in Hong Kong: fitness, as an aesthetic category, becomes a site of investigation for the circulation of imagery and desire. California is, in Asia, best represented not by the freeways, canyons, surf breaks, palm trees, and Hollywood signs that define it in the American imagination, but rather by specific visual cultures like the gym and the parking lot. Both are runways for the display of bodies, perhaps not unlike the gallery space of Central Hong Kong. Projects in this exhibition often touch on the connection between fitness and sexuality, and on how this culturally specific relationship might be warped and reconfigured through artistic practice.

While earlier corporate visions of Hong Kong’s California were tied to marketing initiatives, it is now the internet that has become the cultural sphere in which we can imagine the most interaction between these two categories of places. Net culture allows for a space in which imagery from, say, Los Angeles and Hong Kong could mix without anyone really knowing or caring where it comes from—even if there is a reductive geographic specificity to the generic imaginary that moves back and forth between these two poles. Here the global spread and transformation of an imagined “California lifestyle” is about yoga, spandex, smoothies, sneakers, spinning, and aerobics; this is a distributed imagination of a centre without a centre.

As an exhibition, this proposal derives in part from the theoretical treatise “Preliminary Materials for a Theory of the Young-Girl” authoured by the radical French collective Tiqqun. Although this text was originally intended to function as something of an analytical manifesto of the subjectification of the post-postmodern consumer, in reality it is perhaps most useful as a series of poetic statements that romanticise the position of the young-girl as much as they critique it: “The young-girl resembles her photo.” “The tomboy is indispensable as a kind of modernity.” “Youth and Femininity, hypostatised, abstract, and recoded into youthitude and feminitude, are then elevated to the rank of ideal regulators of empire-citizen integration, and the figure of the Young-Girl thus realises an immediate, spontaneous, and perfectly desirable unity between those two variables.” If nothing else, Los Angeles and Hong Kong are perhaps the two hemispheric poles of this culture, and the gyms are their temples.

Robin Peckham is an independent curator, editor, and art advisor currently based in Hong Kong. His writing and translation is published in Artforum, Yishu, LEAP, and the Journal of Visual Art Practice, while recent publications include books on video art pioneer Zhang Peili and architectural interventionists MAP Office. Current research interests lie in post-internet object cultures, casualist abstraction, and accelerationism.

*Listings in newspapers or on websites such a Craigslist where people can write in and say that they were attracted to someone on the street or in a public place but didn’t exchange contact information, thus giving the other party an opportunity to do so.

Sneakerotics: Further Materials for a Theory of the Young-Girl    Group Show 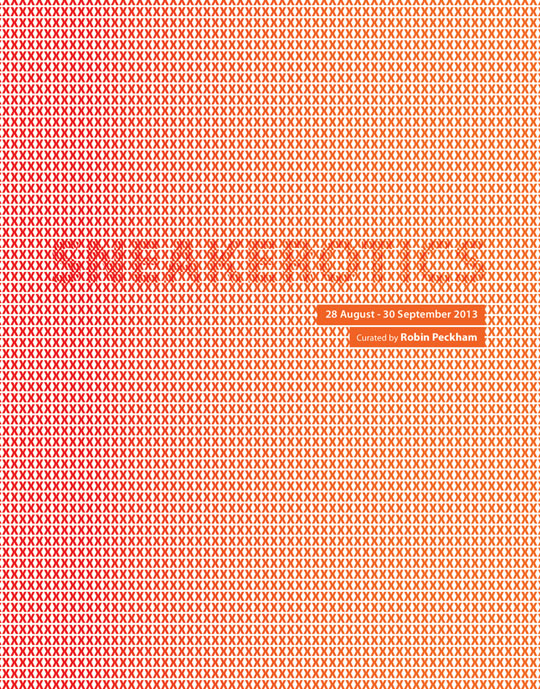