Edouard Malingue Gallery is pleased to present a solo exhibition by the Korean artist Song Hyun-Sook, whose minimalist paintings are compelling in their simplicity and expressive feeling. Delicate and powerful at the same time, they are composed of only a few brushstrokes yet possess a depth of emotion.

Song Hyun-Sook’s career has spanned East and West and explored different media. Born in 1952 in a mountain village in South Korea, in 1972 she travelled to West Germany. From 1976 to 1981 she studied at the College of Fine Art in Hamburg. After returning to Korea to study Korean Art History at Chonnam National University in Gwangju from 1984-1985, she subsequently settled in Germany where she began a career as an illustrator, documentary film maker and artist.

Song Hyun-Sook has developed a unique painting style in which the canvas surface is the only colour field and the subject is depicted in a few, distinct brush strokes. She counts the brush strokes and entitles each of her paintings with the number of strokes needed to complete it.

Seeking her own style, Song Hyun-Sook chose tempera, a medium which was often used in Western medieval paintings. Made from eggs and pigment, tempera is water soluble and opaque. Combining Western and Eastern elements in her art, she applies this paint using a coarse brush made of horse hair which was traditionally used in Korea for painting ceramic wares. Song Hyun-Sook’s brush strokes are vigorous yet sensitive, evoking both space and time.

Her subjects consist of simple structures and objects from everyday life in Korea: a wooden post, a fence, the corner of a house, cooking pots, lengths of ramie fabric hanging on a line, or sometimes human figures. Her works evoke nostalgia and respect for her homeland. They are also symbolic: for example, ramie fabric has been woven by women in the Hansan region of Korea for 1,500 years. Light and fine, it is also very durable and has come to symbolize the perseverance of Korean women.

Somewhere between the figurative and the abstract, Song Hyun-Sook’s paintings feature an elegant, subdued palette. They seem to evoke a deep longing for her homeland, yet at the same time have a meditative serenity that speaks of a wandering artistic soul that has found peace. 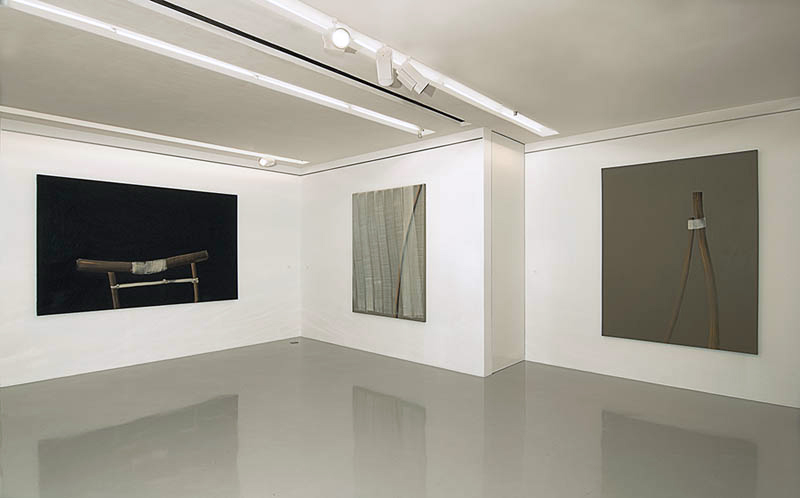